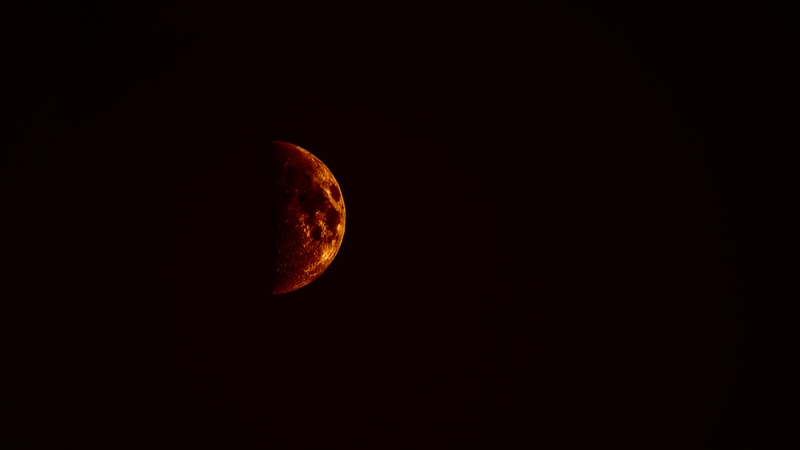 The astrologer had seen the future
and had predicted that there would be
a moon, a full moon, on a day when
the children gather under a dark sky. There
would be a moon, he predicted, half of it dark like
a cloud of acidic rain. The other half would be bright
like a splash of fire from a candle stick. Its brightness
would die at noon.

We are children from a cursed womb.
We are children from an aborted promise,
we flirt with common-sense, we dine with high-handed
stupidity, we sing war songs in peaceful time
while we lay peacefully in war time.
We sacrifice to gods defiled by watery sacrifices,
our sacrileges are recorded in the book of doom.

The prophet had said there would be an abortion
a division of the land when the children grow.
He had seen the works of the herdsmen killing farmers,
he had predicted that the brothers from the dry deserts
would kill the ones from the flowing coastline.
The prophet had said, with excitement, that there would
be bloodshed to water the land. And there has always been bloodshed.

The moon is coming out at dawn since the night
was too dark for it to glow.
The children sleep under cracking roofs, their tomorrow buried in
dangerous serenity. The land is no longer at ease
the leaves are withering, the rivers are flowing with black blood,
yet the elders play the blame game, they are creating scenes of
rib-cracking cackles in the months of nightmares…

These elders will leave no antecedents
but a history of deeds of madness,
they joyously add to the sacrileges of the saintly
gods, paving way for a blurred future,
a glorious end awaits at the end of the fool moon.

do you remember the first day
we met, under that tree with three roots
and brown leaves?

you said they were the root of
our destiny, of our union.

you had a pot on your head,
a heathen pot, filled with water from
the stream that runs behind the big oak
tree.

you sparkle, like the rising sun,
you captured the essence of my soul.
then I became a slave to the charm you
carried.

do you remember the day we kissed,
under the big oak tree, near the stream?
the moon was our photographer, she captured
us, in our bliss and saved that memory
in time.

Aduke, the village beauty, do you remember
the night we were locked in love,
the night we forgot our soul on the bed
made of bamboo sticks?
it felt like heaven, like the best experience,
like honey, like the sweetest thing ever produced
by the gods.

but,
the soul had travelled to the land
of fairies, to the land of many beauties
to the land where I forgot where you are.

I forgot you, Aduke, omo Adunni Oke,
I forgot your rural beauty that mirrored
the simplicity of our land,
I forgot the serenity of your smile when I saw
the heavily painted faces of the city.

farewell, Aduke
farewell to the village beauty
I hope another man waters your land,
I pray that another soul polishes your beauty,
I hope you forgive me for stealing your treasure,
I admit am a bandit, I admit
but farewell Aduke Oke,
the village’s serenity.
————————
Poems © Adedayo Michael Babatunde
Image: David Cohen via Unsplash.com

Adedayo Michael Babatunde is a student of Political Science at the University of Ibadan, Nigeria.

Digging up the Dreams: Poems by Adeola Ikuomola

The Forest of Silence: Poetry by Modou Lamin Age-Almusaf Sowe