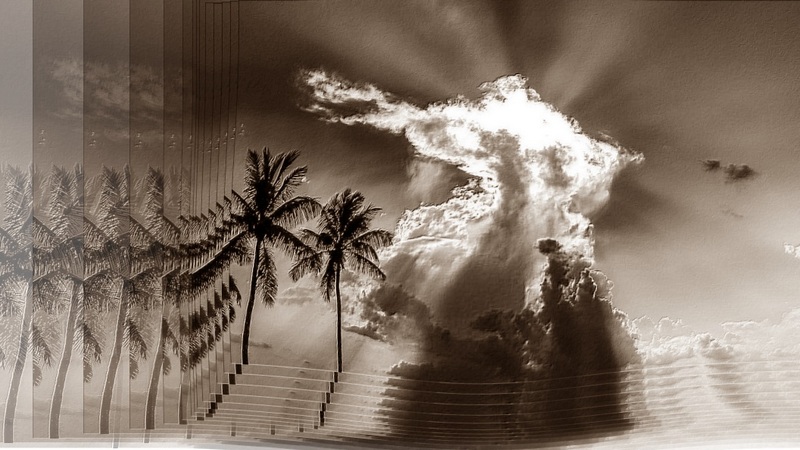 The sensual rhythm of thumping drums
stirred the ancestors in their sealed graves
awakening them from eternal slumber.
Namalenga, the creator
gathered the dark and restless clouds
at the zenith of Kaphirinthiwa*.
Thunder roared in the mountains,
the earth shook violently
as Napolo** recoiled beneath the rocks,
ready for a surprise visit
to the top of the enticed mountain.

Mphambe***, the terrifying one,
sparkled his mighty sword and slashed
the dusky sky into two equal halves
emancipating the viscous waters
that swept the mountain clean
like a cleansing volcanic eruption.
The rain came.

Then uninvited entourage caught us off guard.
Their black book proclaiming righteousness
condemned the messengers of Chisumphi*****.
Their ways bamboozled the tribesmen
and the God rose to the sky in a rapture!
People dispersed in bewilderment
as the spirit soared higher and higher
dissolving into the vastness of blue skies.

But Leza******* patiently cajoles the new generation;
awake you young age,
dig the deep roots of the mighty tree
that is Africa.
Rejoice and sing your black songs
for ere they toured,
Africa had God.
—-
*A hill believed to be the place of creation in Chewa mythology
**Mythical snake believed to cause floods, earthquakes, whirlwinds, etc.
***The God of thunder and lightning
****God manifested in rainbows
*****God
******God as patient
================

What gods haunt this month
when the skies are dark
and the rage of Namalenga* mlengalenga
scares off the infant god;
the pale child in a manger.
When Mphambe** strikes his stroke
Napolo*** weeps and sweeps
celebrants in black down the valley.

What angry and hungry gods
haunt this month
as wine tingles and mingles with blood
dread and anxiety/ mourning and festivity
converge in a single bowl;
the chalice of Dionysus
he who compels the poet to create.

CAN YOU HEAR THE MUSIC?

Can your ears hear the musings,
the sweet melodies of mellow birds
chattering to the rhythm of the winds
birching on the antlers of Nyika?

Do your otoliths dare to catch
the lisping whispers in the winds
of leaping crickets chirping to nights
as dark as the moon by day?

And do your eardrums beat
to the rhythm and bass
of frogs croaking and groaning,
churning the mud and grunting,
breathing life into nights
as dead as the land?

Can you hear the music of nature
seducing the sleeping giant in the artist
to listen, to feel, to conceive,
to create?

I was possessed by the spirit.
He seized my being in delirium,
rolled me
down
the slope,
wobbling
and plunging,
smashing my feeble back at Mwala Umodzi*.
This is where the God rested.
These hunkers pictured on a rock
are the timeless marks of the spirit
defying scientific sedimentation.

Captured in phantasmagoria,
I think I saw the spirit leap
from where he planted his footprints
on the edge of Chafunda Lundu**.
My digital camera matched not the flashlight
when the God thundered;
worshippers must be intoxicated at Mtsakana***.
Surely the rain will come.

Then I heard the people’s cry of desperation;
“The rain won’t come!”
Marasmic infants wobbling on red sand
bellies stout like premiership footballs
about to burst under the wrath of the angry sun.
“Hear us out Jerusalem for we die!”
“Rescue us great prophet!”

Carbon fumes have bamboozled the cosmos
(Global warming they say)
The dark clouds refuse to gather,
they refuse to cry when they gather.
Not a single tear.
Just sweat and tears. Sweat and tears.
Locusts now feed on the corpses of young ones
littered across the plain;
no green in the field,
no life to sustain the pests.
Surely the gods must be crazy.

Hear the people cry;
the fertile farmland that produced plenty
is now that overflowing graveyard
soothing plenty of lifeless bones
beneath its wicked warmth.
ARVs will not kill the virus.
The vampire continues to suck the dusky blood
like an infested jigger.
Electrocuted wires of hair
on withered black bodies
defeat the spirits of the newly hatched;
is the curse of Africa the last plague?
The cultural aliens cry out
to the ears of their new saviours;
“Please help us with the rubbers
that prevent flesh from rubbing onto flesh!”
“Oh, prophet! We thirst for anointing water
to cleanse our beloved land!”
Surely the gods have deserted us.

How I wish my grandmother,
that ancient pot of sacred wisdom,
lived in this age and time.
Her ancient words were life giving:
When we offered the gods masese**** at Mtsakana,
the rain came.
When the gods struck the land
with strange plagues with no names,
we went imploring at Khulubvi*****.
Search within your hearts
you young age,
perhaps someone wore their oxfords
or brought their IPod to the sacred shrine.
That guinea fowl in the yard may be the spirit
evading the envious Mlauli******.
Under that acacia tree,
Mbona******* awaits your sincere call.

—-
*It is said that at one time Mbona sat on this rock and left buttock imprints
**It is believed that Mbona rested here when he was preparing to establish his own capital
***A rain shrine used as a sacrificial site to honor the spirits of the dead
****Local brew.
*****A place where the Mang’anja worship the spirit of Mbona
******Mbona’s uncle who wanted to kill him out of jealousy
*******Legendary figure credited with magical powers of bringing rain, creating forests, creating wells of water on sandy land, and the ability to transform into creatures such as guinea fowls
=============================
Poems © Wesley Macheso
Image: Pixabay.com

Bring The Daughters Home: A Poem by Kwabena Agyare Yeboah