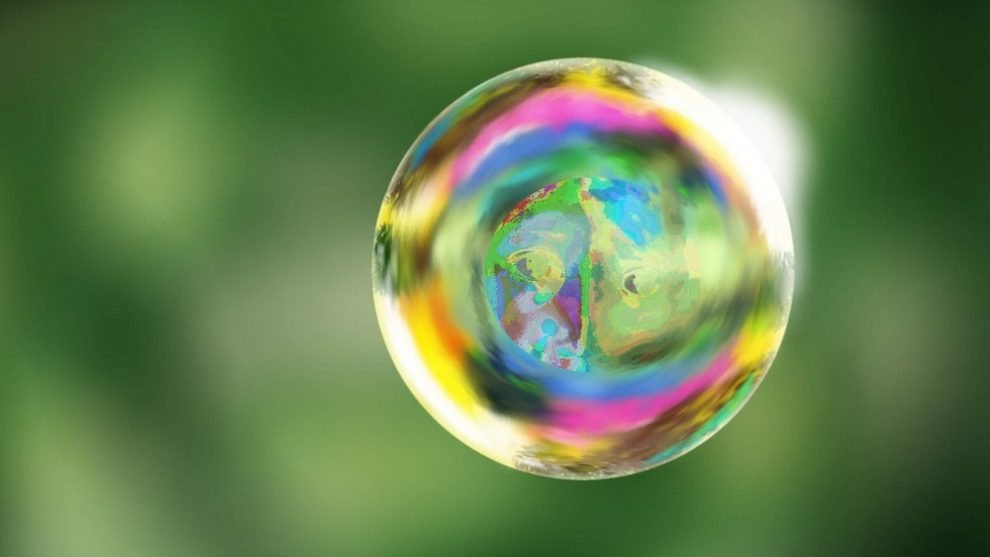 Little Boy creates The Bubble from the milk white foam he has made his kingdom in the bathtub. He has been sitting in the cold hot water Momi put in for him to soak away the dirt he gathers from the primary school fields and rough concrete he plays on.  When he feels a sudden itch under his foot, the part that is swollen like the stomach of mangoes (green mangoes not yellow mangoes), he tries to shake the itch away, rubbing his leg against the peeling flake of the tub. He is wondering if the tub will make his brown skin white, like spoilt beans growing moulds when The Bubble is given life and it ascends out of the cold hot water of the tub like a ministration. Little Boy watches it rise like Ria the neighbour’s red and white coloured rooster when evening comes and it flies up a tree for the night. He feels like a wizard with a pointy cap or the white witch in Snow White waving a magic wand through the air. His magic wand is his leg rubbing against the flakes in the tub. The Bubble continues to rise. It is a world. Round like a world. A world with many colours in it, colours stretched out like rubber bands almost tearing.  Little Boy wishes as he watches it rise if it likes curry, because Momi is cooking and the air is alive with its familiar tang. What if, he thinks, The Bubble doesn’t like curry and it folds its face to sneeze and bursts with a soundless pop. Will he be able to make another? Maybe he will spend all day rubbing his leg against the flakes or tell Pops to help him. No. no. Don’t tell Pops anything, he reminds himself.

The Bubble has a Curious Heart. When it rises well above Little Boy it stops and seems to look down to its maker. It catches the smooth edges of his face on its delicate see-through walls and paints them with all its colours. Little Boy giggles when he sees it. They will make good friends. The Bubble hears sounds from Outside the Bathroom. It will look down at its maker then hear the sounds again and its Curious Heart will ring with…well, curiosity; and it will want to leave.

“Don’t worry,” Little Boy says. “Go see the rest of my house. The dirt hasn’t all soaked away yet so I can’t join you. But please return to me.”

The Bubble will almost burst with joy, but that will be bad for our story and make his creator sad. So, it moves away quickly, riding the wind like a prodigal leaf towards the room’s door, out into the corridor. The corridor is warm with memory. On both sides of the little passage are stacks of white and browned newspapers tied with thin ropes into bows as if they were gifts. Beside the stacks of newspapers are boxes, some made of strong leather with the long black hair of the dead animal still on, some made with plastic holding stains of the several places they have been to. The light bulb above gives off yellow light dark at the borders, when The Bubble floats underneath, it catches the yellow light inside its world and holds it until it can’t anymore.  The air is sweet and sweaty, warm and cold, like two sides of a coin, with a tang like curry but with a smooth wave like cream.  Along the corridor are two doors side by side like bottles on a table, filled with water and unmoving. The Bubble smells the scent of talcum from one room and knows it belongs to its creator, the other oozes with secrets like the pupils of an old man, and something else, something salty like sea water mixed with flesh. The doors are closed so despite the beating of its Curious Heart, it can do nothing but float on. Another door stands open at the end of the corridor; a green curtain is spread across the entrance. As it approaches the Curry wind blows the curtain in and lets it pass. Curry wind also carries the sound of Little Boy’s giggling. It lifts The Bubble higher up into the air, almost touching the ceiling boards cut into squares like slices of bread bordered by pieces of wood.

This new room is Big.  Bigger than the room with the bath tub. It smells differently too. The Curry wind is stronger here because there is more curry here coming from the Other Door on one end of this new room. It also smells of something dead or spoilt or squishy like chewing gum kept too long in your pocket. The Bubble catches the room and fits everything into the insides of its world so it can show it to Little Boy when it returns to him. It arranges the three dining chairs with nails sticking out of them on one side of its world like it is arranged in the Big room beside the Other Door. It fits the tv on one end, in front of an old couch that sits like a sad old man.  It arranges Pops on the couch just the way it sees him sitting reading a newspaper with eyes so hard they are almost pearls, smoking a cigar.  The Other Door opens and out of it waves of Curry winds flow out. Other sweet-smelling spices hide under the garments of The Curry wind. A woman emerges. She is gentle and her face seems to always hold her smile, her eyes are better than Pops’. They are brighter. The Bubble fits her in just as she calls out,

“Coming, Momi. I am waiting for someone.” The Bubble shivers in excitement at the thought of being waited for. That special thought.

Curious Heart is calm now. The Bubble turns to return.  Just then something inside its world begins to change. Like the wind that comes before the rain, not pleasant like Curry wind but terrible. Angry. There is a voice, there is movement. It has to stay to show Little Boy exactly what it has seen. Pops stands up, the cigar is done and out. He tosses it to the floor in front of Momi.

“How many times do I tell you dinner should be ready before I return, ehhh?” Pops’ shoulders bend like the tree bowing down. He is moving towards Momi. The newspaper is folded into a sausage.

The Curry wind stops. Even if it remains, The Bubble doesn’t feel it. It tries to fit what happens into the inside of its world and it feels itself swelling. Not with joy. Far from joy.

“You always disobey me. You and that little rat.” He points towards the room with the tub. If both of them look up they will see The Bubble floating close by. It has to leave. Its world is in chaos. Its colours are draining into a sink. It has to get back to Little Boy. But the bubble is heavier, its world isn’t round anymore, its colours are dying. Its world is ending. So, it falls and the Curry wind doesn’t reach for it. It hears Pops smack Momi with the newspaper, then with something harder, something that rings like a bell in a field.  The Bubble tries but fails to return to Little Boy.

The green curtains open and Little Boy steps in, swaddled in a towel very big and very fluffy. His hands catch The Bubble before it touches the ground.  The Bubble hears Pops hit Momi again. The Curry winds carry the sounds to it because he has dragged her into the Other Door filled with The Curry and other spices. Then it bursts on Little Boy’s hands, scattering its world all over the lines of his palm, on his short pink nails and on his wrist.

All the things it wanted to show its creator disappear.

Edosio Okeoghene is a writer from Nigeria. He is always working on a short story and when blessed by the muse, a poem. He views writing as the only thing that makes sense in this world and he has a thing for the
surreal world and Coldplay. You can find a work of his published in the Kalahari Review and the others in his diary.

The Fire That Charred Amani: A Short Story by Ronnie Uzoigwe

Adeyele Adeniran
We use cookies to ensure that we give you the best experience on our website. If you continue to use this site we will assume that you are okay with it.Ok