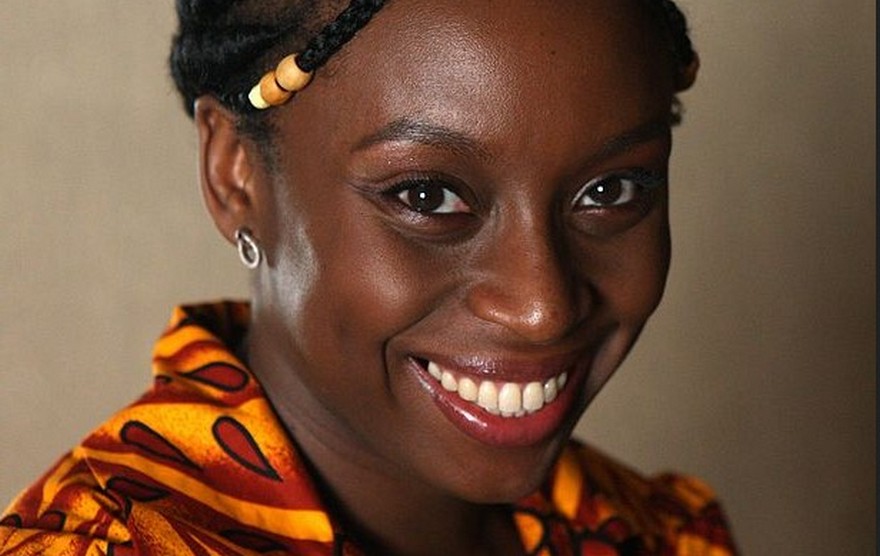 In my book Chimamanda Ngozi Adichie is the quintessential global voice in this day and age. She transcends literature to dominate multi-dimensional universal discourse. For instance, her recent encounter with Hillary Rodham Clinton on priming “wife” over all her intimidating achievements nearly overwhelmed the elastic space of the worldwide web. It’s thanks to Chimamanda’s gumption that Mrs. Clinton promptly readjusted her Twitter handle!

Beyond all the hoopla it’s crucial to keep reminding the world that Chimamanda belongs to the printed word. Her novels and essays are the founts of the repute. It was indeed a moment of giddy celebration for me to lay hands on a complete collection of Chimamanda Ngozi Adichie’s works published by the new publishing phenomenon in Nigeria, Narrative Landscape Press. The deftly designed books displaying images of VLISCO fabrics were wrapped together for me by the personable promoter of the publishing concern, the novelist Eghosa Imasuen, alongside his charming partner Anwuli Ojogwu, in a colourful paper band bearing the legend: The Adichie Collection.

The books in the order of the year of publication are: the first novel Purple Hibiscus (2009), the second novel Half of A Yellow Sun (2006), the short story collection The Thing Around Your Neck (2009), the third novel Americanah (2013), the essay We Should All Be Feminists (2014), and the essay Dear Ijeawele (2017). All the books were reissued by Narrative Landscape Press in this year of Our Lord 2018.

Chimamanda Ngozi Adichie made a memorable mark on the literary world with the opening words of her debut novel Purple Hibiscus: “Things started to fall apart at home when my brother, Jaja, did not go to communion and Papa flung his heavy missal across the room and broke the figurines on the etagere.” The mention of things falling apart put Chimamanda from the very beginning in the frame of the legendary Chinua Achebe. Little wonder The Washington Post Book World dubbed Chimamanda as “the 21st century daughter of that other great Igbo novelist, Chinua Achebe.” The coming-of-age story of Kambili against the background of dictatorial national politics and problematic familial Catholicism won for Chimamanda the coveted Commonwealth Writers Prize, and the Hurston/Wright Legacy Award. A writer of great promise had arrived on the world stage, and her next work was awaited with bated breath.

The release of Adichie’s universally acclaimed masterpiece Half of A Yellow Sun in 2006 obviously fulfilled all the promise. Chinua Achebe’s commendation of Chimamanda demands reiteration: “She is fearless, or she would not have taken on the intimidating horror of Nigeria’s civil war. Adichie came almost fully made.” The novel that can be also titled “love in the time of war” tenderly renders the intertwined lives of the rustic houseboy Ugwu, his university professor Master, the twin sisters Olanna and Kainene, and the English writer Richard within the ambit of the vicious contradictions of the Biafra war. It is Ugwu’s story writ large as per the last line of the book: “Ugwu writes his dedication last: For Master, my good man.” The theme of the book thunders: “The World Was Silent When We died.” Half Of A Yellow Sun deservedly won the Orange Prize for Fiction.

Chimamanda’s 12 short stories are collected in the 2009 book The Thing Around Your Neck. These stories had earlier appeared in esteemed magazines and journals such as Granta, Iowa Review, The New Yorker, Virginia Quarterly Review etc. The title story “The Thing Around Your Neck” is set in America and is entirely told in the second person personal pronoun, “You”, thusly: “At night, something would wrap itself around your neck, something that very nearly choked you before you fell asleep.” The story “Jumping Monkey Hill” strikes as the shenanigans inveigling Western writing workshops for African writers. My daughter whilst in secondary school wanted to meet Chimamanda to ask the relationship of between the first story in the collection “Cell One” and her debut novel Purple Hibiscus! As you can see, Chimamanda touches all lives, young and old.

Chimamanda’s hip and contemporary third novel Americanah was released in 2013 and won the National Book Critics Circle Award in the United States. Teenage Nigerian lovers Ifemelu and Obinze are separated when Ifemelu travels to the USA. Obinze cannot make it to America, and so ends up in London. Fleeing from a Nigeria of the NTA advert of “Andrew Checking Out” does not always guaranty any greener pasture overseas and there are racial issues to deal with. Obinze as wealthy man on his return some 13 years after and the renowned blogger Ifemelu serve up a very intriguing love knot.

Chimamanda speaks well, much like James Baldwin who also writes well and speaks well. When Chimamanda gave a talk entitled “The Danger of the Single Story” the internet could not have enough of her. She does not quiver in the face of controversy, whence her December 2012 TEDxEuston talk titled “We Should All Be Feminists” which has since garnered some two million YouTube viewings. The modified version of the book has been published as a book of 50 or so pages. Chimamanda tells personal stories like when a primary school teacher promised to make a class monitor of a pupil who took first position in a test – she came first but the boy who placed second was chosen! She quotes the Kenyan Nobel Peace Prize winner Wangari Maathai: “The higher you go, the fewer women there are.” Chimamanda first heard the word “Feminist” at age 14 from her late mourned friend Okoloma, and she had to look it up in the dictionary thus: “Feminist: a person who believes in the social, political and economic equality of the sexes.”

In her 2017 47-page essay-book, Dear Ijeawele, subtitled “Or A Feminist Manifesto in Fifteen Suggestions”, Chimamanda writes so long a letter to her friend who “asked me to tell her how to raise her baby girl a feminist.” It is akin to reading James Baldwin’s essay “My Dungeon Shook: Letter To My Nephew On The One Hundredth Anniversary of The Emancipation”, published in The Fire Next Time, which begins with these words: “Dear James: I have begun this letter five times and torn it up five times.” Like Baldwin, Chimamanda tackles the morally urgent questions. Her first premise is: “I matter equally. Full stop.” She illustrates this with her being: “The truth is that I have not kept my name because I am successful. Had I not had the good fortune to be published and widely read, I would still have kept my name. I have kept my name because it is my name. I have kept my name because I like my name.”

It’s such a thrill having to read Chimamanda all over again. This grand initiative of her Nigerian publishers Narrative Landscape Press is indeed splendid. Putting the books together on the shelf is a sight to behold. All lovers of books deserve to have theirs and should not come to borrow mine!

Olalekan Daniel Kehinde: Becoming The Man My Father Was