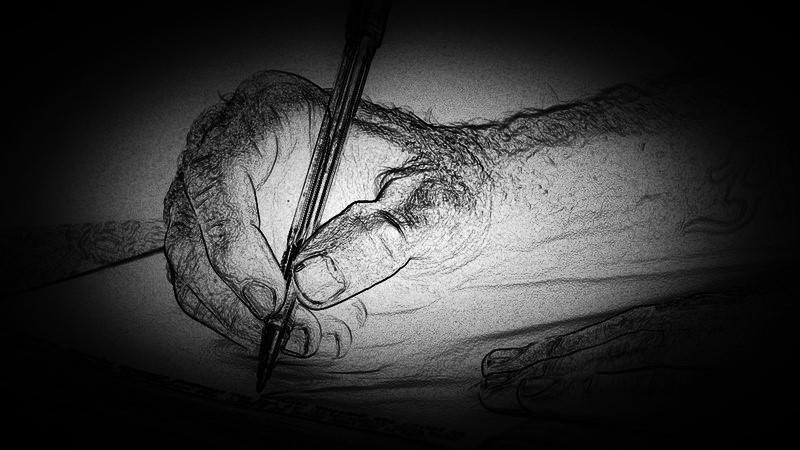 To His Excellency,
President, Federal Republic of Nigeria.

The radio and TV pontificate that you are back from London, where you ventured to examine and treat your disappointing ear or ears. Welcome! His Excellency, May I seize this golden opportunity to narrate, with precision and accuracy, what actually happened in Anambra State that Black Day? I never knew this would befall me. I never knew I could forget to remember to eat for days. I never knew I could roll myself into a ball in bed and cry like a schoolboy whose chocolate was snatched from him by an uncaring stepmother. I never knew. Oh God, I never knew!

That frosty Tuesday evening in an unpleasant pub in Onitsha, she told me that Nigeria was staggering perilously in a stinking gutter because it gulped beer and still gulped that satisfying alcohol popularly known as Corruption Lager beer, 45%. “And because our nation’s stomach is overloaded with Corruption Lager beer, she can bite you on the neck like a mad dog and watch you slump on the pothole-filled roads as blood oozes to carpet the ground,” she added. Then she shook her head gloomily and lit a cigarette, her eighteenth of the day really. I serenely sipped my cold Hero beer and watched the smoke she had expelled through her ringed nose curl fantastically above her weird Afro hair. Nwanyibuife–for that was her name–was an eccentric, refreshingly argumentative social warrior, according to Mr. Maxwell, her garrulous landlord. Oh yes, she was argumentative, as you can see. I itched to altercate her, to say that our dear country was sober, but something restrained me, perhaps trepidation. She was my girl, oh yes, but my friends, particularly the banana-nosed Obinna, habitually remarked that I, a 26-year old man-shaped man with a penis, was Nwanyibuife’s girlfriend and she my boyfriend. The irony of this comment always nearly galvanized me into clouting Nwanyibuife to prove to my taunting buddies that I was a man, a real man at that, but, oh God, every time I lifted my petite hand to perform this needed action she’d seize it at once like the Undertaker (His Excellency, do you still remember this professional wrestler?), and push me violently down from my chair.

No, no, no, I’d not alternate. “You’re right, Buife: Nigeria is drunk,” I mumbled, and lifted my glass to my lips.

She made a vague sound, a hmmm, drained her glass and lit another cigarette. Nineteen. Oh God, don’t count the cigarettes, His Excellency, please…Ah, where did I stop?—Oh yes! She then leaned back in her Star Beer chair to savour her Benson and Hedges. For a moment, the pub was wrapped in silence. Then the loud speakers split the silence and almost shattered my eardrums:

Mr. President, American pop and R n’ B has never appealed to me. So promise me a hug in Aso Rock because I prefer our musicians, Osadebe, Sunny Ade, Onyeka Onwenu and Fela Kuti. So I implored the long-necked barman to turn down the volume. He obliged. But I shouted to submerge the foreign music completely, “Our president will turn things around, hopefully. He promised to drag change into our dear country. Can’t you recall how his disciples sang “Changeee” on the roofs of the political party vans? He is the solution to this problem of corruption. Let’s give him time, Buife.”

“Don’t rile me up, Kachi!” she thundered, and two adolescent lovers who conceivably sneaked out of their school and changed to come here turned from the table where they sat kissing amateurishly to stare at me and my furious woman.

His Excellency, I didn’t want the lad to ascertain that my girlfriend was intimidating me so I let anger wrinkle my face and I bawled, “Listen, Buife my doll, don’t shout at me…And I still maintain that Nigeria is not drunk. I believe and I want you to believe in this present government…”

Boom! She smacked me over my balloon of a head with her empty bottle of Gulder beer and stomped out smoking her twentieth cigarette. I sat there yelling and clutching my head. But the little mirror on her forgotten cigarette lighter proved, to my relief, that my head wasn’t bust open like a coconut. The teen lovers howled with laughter, and I shielded my face shamefacedly with my copy of Vanguard newspaper. This amplified their laughter; they laughed without cessation and the barman emerged with a shovel and drove me out.

And that, His Excellency, was the last time I saw Nwanyibuife. I will never see her again because I was trying to advertise your competence.

That night, I wept as the rain beat against my windowpane
Birds sang merrily in the dancing tree outside
And I wept
They sang
I wept
They sang
I clutched the periwinkle flower she gave me on my birthday close to my hammering heart as I wept
The wicked birds sang; owls hooted.
Thunder boomed rattling my windows, followed by lightning
And I wept
Oh Buife, whom I will never again hold like a pillow when it rains!
I wept and wept and refused to be consoled.

Where did the bloody cigarette-smoking, ranting girl venture, you wonder, His Excellency?

Her sudden disappearance, Mr. President, turned me into an inspector. Ten days into my investigations, I learned from the residents of Obosi, a suburb of the commercial city of Onitsha, that she was one of the “Biafrans” who were shot and buried en masse like dogs that day in Anambra by the soldiers, your men, my men, our men. She was the only woman who fought for the cause and died. If I were a writer, His Excellency, I would call her story this: The Tragedy of an Unemployed Biafran Woman. But I am not a writer. Many people died fighting, men and women and children. I was really interested in this Biafra agitation and so I carried out a research. And here is the synopsis of the thesis, His Excellency:

Buife was born on 19th May, 1992 to the family of Ichie and Lolo Johnson Okafor in their hometown of Nnewi. But she left her parents to join her Uncle Emeka in Kano when she was nine. I met her in the band in our church in Kano and we fell in love. Her instrument was the piano and mine was the guitar. We dated growing up. Together, we played and sang and kissed and stimulated and fought and ate together like little husband and wife. And we cried together. We were even the “best couple” at the university in Kano, where she read political science and I read music. But she loved music more than me. Perhaps music tightened our relationship like a rope tightened a bag of sand. She’d come back to the hostel off campus late at night drunk and singing the National Anthem. I’d rebuke her and she’d push me against the wall. But the next day, she would apologize with a tender kiss, buy me beer and food and then fuck me. I never fucked her. She fucked me.

Buife yielded to the lure of the green bottle and tobacco because her childhood was filled with agony and sorrows. Her twin sister Mary was beheaded in Kano for “blapheming against Islam” in Kano. (A Muslim trader next door at Sabon Gari, who hated her, asked her to stop eating the bread she was eating during that Ramadan season and she interjected that she was a Christian. The man yelled something in Arabic and Muslims gathered like ants around a cube of sugar. And the next moment thousands of Muslims in Kano were dancing with Mary’s head in the streets.) Her father, who was a barman, was whipped and nearly burnt for selling liquor. His countless crates of beer were shattered and burnt because “it is against God.” A “little” war ensued. Christian blood flowed in torrents in the north; Muslim blood did likewise in the east. The crisis took Buife’s only brother. He was nailed to a bamboo cross in Kano. He died on the cross like Christ. Buife and her mother dressed up in white hijabs like proper Muslims and escaped from the north. Her father remained there. He said he would stay for years and run for the governorship election and if he won he would alter some nefarious laws. But, four years later, when he declared his political ambition in Kano his corpse was found in a maggot-infested gutter the next morning. “Kano is not your Anambra” was written on the chest of Buife’s father, a man who spent virtually all his life in Kano. So she grew up to hate and despise northerners, albeit she had gleaned from the papers and from people– including the Igbos–that the Igbos sometimes did worse. In Onitsha, over twenty innocent Hausa cobblers, for instance, were tossed into the Niger river. Fishes gobbled their dead bodies.

My father, whom she loved, despite all the Christians’ mockery and threats, respected and never killed the Idemili royal python. He was butchered by the Fulani herdsmen recently in one hamlet in Enugu State. This horrible sight of my father’s headless body made her go mad and she cried. I never saw tears in Buife’s eyes before that day, believe me. But that sunless afternoon, she cried, her tears dropping on my father’s corpse. She cried and I cried and everybody cried because the government was silent when my father died.

DISCUSSION OF FINDINGS AND RECOMMENDATIONS

From the findings of Buife’s life, His Excellency, it could be concluded that there’s not enough love between the northerners and Ndigbo. I discovered that Buife incited the father of her friend to fire all the Hausas in his company. And the moron did. It was also revealed that Buife shot down many innocent northerners in Onitsha and in my hometown of Oba shouting that it was about time Nigerians left Biafra, her fatherland. (Oh why, Buife? This is sheer wickedness!) Buife craved for an Independent State of Biafra. And when that man you called “rebel” was controversially arrested, she joined the angry “Biafrans” chanting, “Free NNAMDI KANU!”

And the Nigerian soldiers emerged and shot them in the church, where they had scampered to hide.

His Excellency, don’t get me wrong, please. I really love Nigeria my country. And I love you too. But you have to do these two things for me:

1. Promote peace and unity in “One Nigeria” by ensuring that no region is forgotten in your government (all the federal roads in the east, for instance, are deplorable.)
2. Negotiation. Invite the IPOB members to Abuja and talk amicably with them.

His Excellency, I will drop this letter at the gigantic gate of Aso Rock and, if by luck, it gets into your busy hands, hurray to the gods!

Now, I have to drop my pen to mourn my Buife. But I must say thank you, His Excellency. God will embellish you and prolong your life as you do things.

And may God bless Nigeria and all African nations.

Esomnofu Ebelenna was born in Onitsha, Anambra State. He read English and Literature at the University of Nigeria. When he's not writing, he paints and listens to music.

Rude Was The Shock: A Short Story by Alexander Nderitu

Do Not Urinate Here: Fiction by Muritala Sule

My Book Is A Product Of Frustration – Odili Ujubuonu