Eko o Nii Baje: a Collection of Short Stories on the Challenges, the Fun and the Excitement of Living in a Megacity.

Eko o Nii Baje is a collection of shorts stories, in the words of the publisher, on the challenges, the fun and the excitement of living in a megacity, Lagos. It is a 163-page book containing nine short stories of varied lengths and disparate themes, inviting the reader for a closer look at the sprawling Nigerian city originally called Eko. Each narrative gives us an angle of Lagos which is at once familiar and strange, peculiar and general, awaking us to the gritty realities of the Nigerian condition. 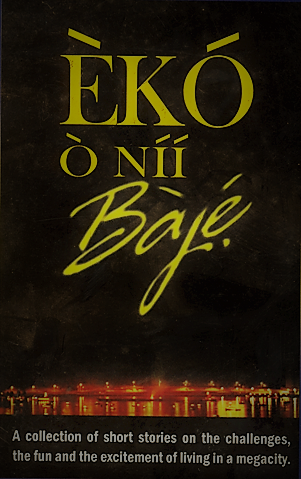 With this book, and the recently published Lagos of the Poets edited by Odia Ofeimun, Lagos continues to be imprinted on the literary scene as the most dramatised city in literary writing in Nigeria. From Cyprian Ekwensi to Buchi Emecheta, from Maik Nwosu to Sefi Ata, Lagos continues to play the role of setting for actions and diction that are peculiarly Nigerian, fashioning a space that is valid for a theorisation of the engaging response of Nigerian writers to our turbulent history of nationhood and democratisation. In an interview with me, Maik Nwosu, whose metaphoric exploration of Lagos surpasses that of any of his contemporaries, says, “For me, Lagos is a place and a metaphor. Lagos is an intense spellbinding city, my favourite city in the world. It is rich in colour, in drama – and, of course, chaos.”  It is the colours and chaos of Lagos that Eko o Nii Baje presents in the refreshing tones and tenors of nine young Nigerian writers.

Let me lead you inside the book. Ifeoma Chinwuba’s “10, Downey Street” opens the collection. Set in Ebute Meta, in a building the narrator refers to as “a ramshackle thing” (1), it is the story of Emeka, a young banker, and his father, Papa Emeka, a pensioner, who visits his son. The central drama of the story unfolds with Papa Emeka’s visit and Emeka’s sexual affair with Iyabo, one of the Lagos girls eager to live with men as a way of survival. Emeka goes to work, unusually, on a Saturday morning only to return shortly and find his father in a sexual intercourse with his girlfriend. Emeka is mad at both his father and his girlfriend, and gives the former a hot pursuit. Chinwuba infuses a lot of actions in “10, Downey Street”, injects pretty good humour in the actions, and lets her language flows with startling euphemisms that belly the physical rots of Ebute Meta and the human frailties of men condemned to an overcrowded neighbourhood.

Narrated from the first-person point of view, like most of the stories in the collection, “A Date with Area Boys,” by Felix Abrahams Obi, is indeed an unforgettable encounter with the notorious area boys of Lagos, not only for Chima, the main character in the story, but also for the reader. Through a series of actions, starting from Chima’s house to the venue of his interview and back to his house, Obi effortlessly recreates the horrendous activities of the area boys in pre-Fashola Lagos. Chima, having performed well in the interview and won the attractive job, has to free himself from the violence of the bad boys, announced by a gruffly voice: “Kilon selee, abi you no get respect?” (42). A self-professed born-again Christian, Chima has to shelve the golden rule of turning the other cheek in order to reach his mother with his appointment letter and life. Seen as a trope, his fight with the area boys is a life-long battle that he, and indeed everyone, has to enact in order to become successful in life.

Deploying the journey motif, Spencer Okoroafor, in his story, “Human Tsunami,” tells a story of a young man, Peter, who travels from his hometown to Lagos with a post-secondary school ambition. Even when he lands in Lagos, in spite of its bristling chaos, Peter’s conviction, as Okoroafor puts it, is “that Lagos was, indeed, the city of gold” (49). Through Peter’s naivety and gullibility, an irony unfolds, leaving both Peter and the reader stunned at the manner in which Lagos and, indeed, Nigeria kills the ambitions of her youngsters. Okoroafor’s major theme interfaces with the subject matter of Paul Olorunmota’s story simply entitled “Lagos!” in which we encounter a first-timer in Lagos through whose sensibility we experience the indignities of life in the slum area of Lagos.

Chinyere Obi-Obasi’s “Mirage”, like Chinwuba’s, is a story of infidelity, but from a marital perspective. The narrator-persona, a young lady, assaults a Lagos girl dating her husband by throwing a stool at her. The victim, terribly hit, goes into a coma, gets resuscitated in a hospital and apologises to her attacker. In fact, it is the day she walks into Madam’s house to confess and seek forgiveness that she is assaulted. At the end of the story there is that disturbing sense of regret and forgiveness on the part of Madam who sees her husband as a man of “everything in skirts” (99) and the ubiquitous Lagos girls as home-destroyers. Obi-Obasi’s cathartic ending brings the women together as victims of the blatant phallus-figure dominating a patriarchal society.

In his own story, “Visa to Heaven”, Patrick Tagbo Oguejiofor recreates vividly the obsession of the poor with Pentecostalism as a way not only of consoling themselves in a society bedevilled by social infamies, but also as a means of hoodwinking unsuspecting gospellers. Oguejiofor’s emphasis is that life in the slum side of Lagos can push one to indulge in such whimsical ventures as the fantasies of heavenly riches amidst earthly rots. A jobless Ephraim walks into a Pentecostal church of solutions only to realise that the spiritual bravado of the church leaders is simply a medium of aggrandisement, as it is in our churches today, where the congregation becomes poorer while the pastors (and their high-sounding aliases) become richer. Oguejiofor ends his story in a way that poignantly interrogates the validity of the so-called foreign religions in supporting Africans to live a good life.

Interestingly, the nine stories in Eko o Nii Baje are about the struggles of the poor in a large city devoid of a good plan and leadership; about a people groping for hope in vain, relapsing now and then into a circle of squalor and despair. Tolu Ogunlesi’s “The Terrorist who almost Drowned a City” and Obinna Nwachukwu’s “Patients of Mesmer” further dramatise the decay and psychic failure that are associated with large cities in Africa. The Lagos of these writers is a city without scruples, a city that gives nothing to its inhabitants except hardship and violence; it is a Lagos offered to us in its dehumanising garbs so that we may rethink the essence of a home, a city, and life in Nigeria.

Each story, from what I have said so far, is worth appearing in this important collection. But it does not mean that the stories are artistically great. Indeed, the artistic flaws in the stories in this collection have further confirmed my long-held conviction that literary expression, a result of proper apprenticeship in techniques and tropes, eludes many so-called writers in our age. In all the stories, I cannot find any quotable expression, weighty with wisdom; I cannot see a language working beyond actions; I cannot find those alluring words that would open doors into the unsaid. It is good for a creative writer to have a nice storyline running, but the language chosen by the writer, and his/her exploration of its elasticity, is the incandescent forte of the creative writer, the very essence of what makes something a living work of art, not what Matthew Arnold calls literature in a hurry i.e. a mere composition.

Really, some of the writers here have stories, but the stories are askew if critically examined. Chinwuba’s story, which could have been the best, begins well, like her Waiting for Maria: action-packed, tolerantly descriptive, and humorous. You are faced with serious issues: squalid environment, a rapacious landlord, jobless gossips, an oppressive pension system, lust and immorality, etc. Then suddenly the story turns melodramatic with actions that are stranger than fiction. Even if it happens in real life (which should not be a yardstick for intelligent fiction), the action of Emeka running after his biological father in a hot and dangerous pursuit, as Chinwuba depicts, because he finds her with a girl he picks from a street in Lagos, kills the story. Other stories, such as Olorunmota’s “Lagos!” lack focus, are haphazard in nature, and give the sense that the writer is simply pressed to say something about Lagos. This, I guess, is the usual weakness of a themed collection in which either the editors fail to do a thorough job or they just want to publish anything. My conviction, however, is that, even though the best of story writers in Nigeria are not featured in the collection, the flaws are symptomatic of a general cancer gnawing at the soul of literary writing in Nigeria today.

In spite of the flaws Eko o Nii Baje is unique in its thematic direction because, more than any single work of fiction, it historicises the terrible mess Lagos became in the years of military oppression and lawlessness. It also historicises the cannibal response of our self-made leaders to the Nigerian condition. Today, the governor of Lagos State, going by the reports we hear, is trying hard to rescue Lagos, one of the most captivating cities in Africa. If and when Lagos is rescued, we will need these writers’ Lagos to tell the story of the past.

The Chef D’oeuvre of Easter: Poems by Collins Okpala

This Africa: Poems by Olanrewaju Moses

Materialism and Stereotype in Born on a Tuesday

Paul Liam
We use cookies to ensure that we give you the best experience on our website. If you continue to use this site we will assume that you are okay with it.Ok