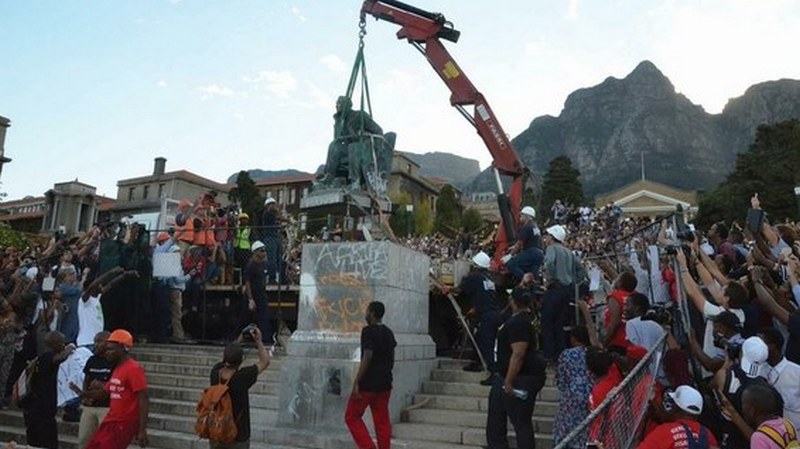 A Review of #Rhodes Must Fall: Nibbling at Resilient Colonialism in South Africa, by Francis B. Nyamnjoh, Langaa Research and Publishing CIG, Bamenda, Cameroon, 2016 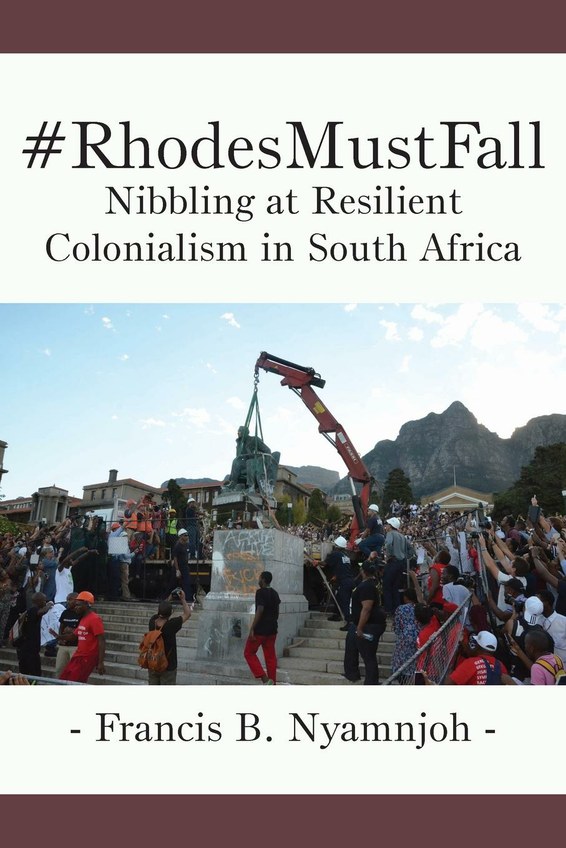 South African university campuses are in a state of crisis and have perhaps reached a point of no return. There are fervent calls for the abolition of tuition fees which may be perceived as a possible measure for the re-distribution of South Africa’s very uneven wealth. The #Fees Must Fall movement is also a call for the decolonisation of South African educational mind-set which is seen as being primarily Eurocentric and unreflective of the country’s ideological needs and developmental aspirations.

Francis B. Nyamnjoh’s #Rhodes Must Fall addresses the issues raised above in a somewhat quirky style. Due to colonialism, we are informed, whiteness in many parts of black Africa is associated with power, privilege and excessive comfort. In this sense, whiteness does not directly refer to skin colour but to privilege as a condition of existence associated with authority and luxury. Here, racism is enacted by the racialised black victim unconsciously; and this form of racism, just as voluntary self-censure, is perhaps the most effective and most cost efficient kind as it does not need the enforcement of the oppressor.

Nyamnjoh’s exploration and contextualisation of the notion of makwerekwere problematises whiteness, blackness, insiderness, outsiderness and South African post-apartheid freedom. As Nyamnjoh explains, the term makwerekwere connotes difference as explicit threat and is therefore sometimes deserving of counteractive violence. Otherness then becomes a source of danger, or at least perplexity, which necessarily invites a xenophobic reaction. In this context, diversity is unwelcome and homogeneity and “tradition” become crucial markers of racial, ethnic and political belonging.

This inserts an ironic twist within the common understanding of freedom that produces an increasingly familiar pang of bitterness. In this case, freedom will not merely entail the entombment of Rhodes’s ghost since blackness in contemporary South Africa narcissistically questions and otherises itself. However, true freedom can only be attained only when the self-abuse, the negative self-questionings of blackness by itself cease.

The ultimate effect of this self-marginalisation is to situate blackness on a perpetual unequal footing with whiteness. Whitenesss becomes absolved of the stresses of makwerekwereness due to its presumed superiority and thus another terminology, a different conceptual category has to be found for it; one that is devoid of stigma and taint of inferiority that the meaning of makwerekwere ordinarily carries. In relation to whiteness, the notion of makwerekwere constrains the possibilities of freedom with regards to the reality of blackness.

Nyamnjoh inserts himself into this account of Cecil Rhodes as a makwerekwere probably to broaden the South African understanding of freedom, to question its more contestable limits so as to underscore the fact that the work of attaining its most ideal realisation is far from complete.

Social and professional mobility by immigrants, as in many other places, is viewed with suspicion and sometimes elicits violent reactions on the part of so-called insiders. However, in South Africa, whiteness and its numerous privileges are often exempt from the stigma and violence that otherness historically attracts. In the popular imagination, (black African) otherness apart from its ontological stigma is also equated with vulgarity.

Nyamnjoh’s categorisation of the British Rhodes as amakwerekwere is both intriguing and baffling at the same time. It probably stems from the usual and very real anxieties of being amakwerekwere in present-day South Africa. To be one is to be plagued with obstacles, challenges and outright violence. For quite a few, it has meant death, or even another kind of death, a vegetative existence eked out in the criminalised shadows of South African society.

So indeed, the condition of the amakwerekwere is marked by chronic anxiety, psychological unease and physical menace. Rhodes, on the other hand, was an incorrigible territorial predator whose deepest apprehensions were only coloured by qualms pertaining to personal and economic failure. And so to counteract these almost crippling fears he ventured out of England in his late teens for what is now known as Southern Africa in the nineteenth century.

Rhodes through his unusual drive, calculation and good fortune became a mining magnate. And rather than sit back and enjoy his stupendous wealth, he dreamed of colonising the whole of Africa from the Cape to Cairo. But even more than that, he had fantasised about total world domination by the British Empire. His dreams included the conquest of the Holy Land, the Valley of the Euphrates, the islands of Cyprus and Candia, South America, the Malay Archipelago and the Islands of the Pacific amongst others. He had absolutely no respect for the indigenes of the territories he subdued and assailed their dignity and humanity at every turn. So even if we grant that Rhodes was amakwerekwere, he was one with a profound difference, a difference defined by unbridled power, excessive material acquisitiveness, utter disdain for local hosts and elemental forms of violence and dispossession.

When the first Dutch arrived in the Cape in 1652 labeling the locals “Hottentots”, meaning “stutterers” and speakers of a barbaric dialect, it was the beginning of a history of relations characterised by greed, capitalism, violence and hyper-exploitation. By Rhodes’s era, this unequal order of relations had culminated in the systemic seizure and plunder of indigenous lands. Such was the case that after the quelling of the Matabele rebellion by Rhodes, the chief of the natives in the area was distressed to find out that he and his people had been dispossessed of their land and would be forced to exist henceforth at the mercy of the colonial overlord on minutely parceled out tracts of land. The effects of this systematic dispossession are still felt all across South Africa in discourses, social movements and grassroots protests calling for the equitable re-distribution of land at national, provincial and municipal levels. These calls are part of ongoing collective exercises pertaining to decolonisation and are also a contestation of the native/settler divide as established by the colonial/apartheid scheme of things.

It is doubtful if the black amakwerekwere could ever transform South African physical space or its natural character with the same predatory intent of Rhodes because his presence in the country reduces him/her to outsider status, one marked by an almost permanent sense of transition. In other words, he/she is not necessarily in a position to demarcate physical space with the same air of authority, menace or permanence that Rhodes displayed and has to relate to the terrain in fluctuating states of withdrawal and agitated movement.

Evidently, Nyamnjoh’s portrait of Rhodes is accompanied by considerable historical research and his constant evocation of the dastardly notion of the amakwerekwere acts as a relentless poke at the rib of exclusive and excessive South African nationalism. Unquestionably, for many a rabid South African nationalist, these incessant digs would seem insufferable. Nyamnjoh’s conceptual prankishness serves to underscore the absurdity as well as theorerical/existential impossibility of xenophobia in a context of hyperglobalisation. In such a context, xenophobia would undoubtedly be a sign of regression, a terminal malaise of insularity, a collapse into an anti-culture enclave, an anti-cosmopolitan retreat stamped by the death of language itself.

What the constant reference to amakwerekwere also achieves is to re-cast the Rhodesian era within the South African present while at the same time drawing attention to a violent South African past that is continually being re-enacted in the present. Thus a violent dialectic links the past to the present and vice versa.

As stressed, analysts argue that the effects of Rhodes’s massive economic and psychological pillage are still to be felt in the lives of millions of the dispossessed blacks who remain perennially locked out of South Africa’s formal economic system; holed up, as it were, in collapsing and violent shantytowns without jobs, basic amenities and most of all, hope.

And as noted, embedded in Rhodes’s quest for the total subjugation of Southern African natives was a concomitant drive to entrench the racial and cultural order of whiteness; a quest most evident in the elaborate effort to re-populate the region with white folk. And by this concerted effort at re-population based on white supremacy, Rhodes had intended to overturn the original native/settler equation through inordinate force. The native would in turn become a settler on his/her own land while the settler became native.

Ultimately, Nyamnjoh unearths the oddities lodged in the meaning(s) of amakwerekwere which through the onslaught of capitalism create divisions in South African society; divisions that are largely informed by the native/settler dichotomy or the insider/outsider distinction. Perhaps more importantly, these societal schisms are meditated by shifting technologies of power which could all of a sudden alter what it means to be native or settler in really drastic and often confusing ways.

It also means as long as the notion of amakwerekwere continues to be politically active, the democratic project remains at risk and the discourse on human rights faces severe ethical and practical challenges.

Nyamnjoh’s perspectives are also inflected by shifting terrains of marginality and privileged access. Being a Cameroonian, he is an outsider but albeit, a most distinguished one as a professor of social anthropology at the University of Cape Town (UCT), home of the #Rhodes Must Fall protests. As such, he is able to observe at intimate quarters, agitations for intellectual decolonisation which emerged in the wake of the successful drive to have the looming Rhodes statue removed from the campus.  Finally, as highlighted here, more than just an analysis of the student movement within UCT and beyond, Nyamnjoh’s narrative includes an interrogation of the ways in which conceptions of “outsider” and “insider” are never fixed categories but instead are subject to power, positionality, capital and contingency.

Sanya Osha is the author of several books including Postethnophilosophy (2011) and Dust, Spittle and Wind (2011, An Underground Colony of Summer Bees (2012), On a Weather-beaten Couch (2015) among other publications. He currently resides in South Africa.