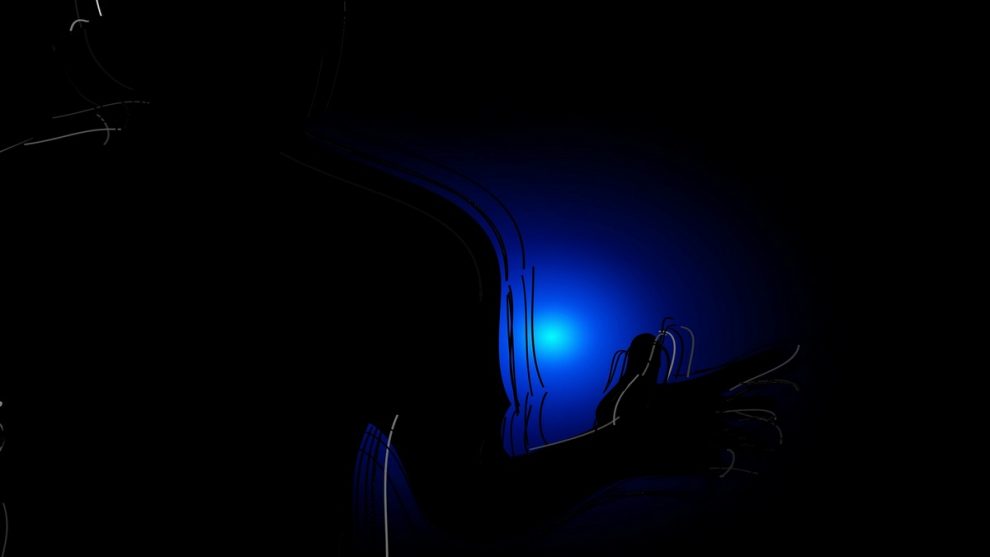 Tiny Holes Like Microscopes on Your Mother’s Favourite Wrapper

Why does a man die in secret?
Whenever your Bearer spreads her legs whole enough to bury you
She serves her tears—& says, drink and be whole!
You drink.
Your head bursts open.
Home becomes a plate of little broken things.

How do we die in happiness & resurrect in pain?
A body has no shadow
& every fire burns under his flesh like the torments of thousand sinners;
Survival is the eleventh law of saints.
Say Mother dragged you to God’s Arm & you became Moses
& you sliced the gospel into suicide notes:
Love is blood
Running too deep
like family’s root.
Death bears us witness.
Everything your body knows in darkness & silence is prayer.
How many times does a body die?

i. Speaking of angels is to learn how to hold flowers between your legs like an atlas—to map your world into cardinals. South rolls by to say, Momma what hole holds a man this long? North paints our skins black, so black, you can’t find your face… East slides into your skin like reading the Bible whenever you hear demons crawling over your sister’s eye. Blind like whatever the sun sheds. West rolls by to say, let me into your house that I may sing unto your flesh the songs of light.

ii. Speaking of death is to know that angels hold heaven in its belly. To know father as one who sinks deep into misery, who dances naked under the earth core like wobbling legs dancing to an Organ. To know stories like death, wars of souls, and depression as tiny holes like microscopes on my mother’s favourite wrapper.

Where will man live after?
Upon the sinking ship of mahogany roofs: where he waits up for the call of the Master.

Five Laws of Prayer Mixed with Songs Wrapped in Marijuana

i.
Begin a poem with images of Hibiscus growing among nettles / the sting of every moment he lifts his face up in prayer like a salted worm / trying to touch the sky / to squeeze out ruins and reigns / to pull out its deep roots / to run away from darkness / the heart is always an empty cone / so he died on the day he knew life as a prayer

ii.
Begin a poem with smoke / stuffing your nose inside a dark room / the fear of holding your breath / the fear of knowing smoke never make it to heaven / how it dies before kissing the clouds / & not stay long / through smoke you see your father’s eye / the colour of blood / wrapping up prayers / like smoke / with sticks of marijuana

iii.
Begin your poem with how to paint a girl / how to see regrets / delicate, smooth and scattered like soft berries smashed by a rock / hold the pencils straight and pointed like her breast / think of your sister raped before your eyes / her woes / her cries / her death / then breath life onto her skin / & call her mother

v.
End a poem with a song / oh shekeleke! Give me a white plum & take my black / tell your shadow to pray this way / sieve the seeds like your heart / wrap it in a white skin like washed iniquity / spittle the loose corners to remain strong even in tribulations / light it up like the gods has set you ablaze / & watched you burn of ashes / then become smoke

Under the rusty umbrella
Whose foliage has gone extinct:
Stands a dying boy
Who sees tomorrow,
Who tickles red clays
To bring forth shapes.
To unravel the mystery of life
He sent a butterfly on an errand
With staff,
With sack,
To come back with answers
About why a woman’s body
Is a tree full of blooming flowers.
I sat at the Riverside,
Waiting.

And a boy has learned a lesson:
Life is just like discarded poems:
Full of characters,
Full of mistakes,
Full of things.
—————-

N. N. Emmanuels is from Nigeria. He is a writer, poet, avid reader, and learner of new things. Right now, he is an undergraduate at the University of Nigeria, Nsukka.

Living the Day: A Short Story by Ronald Adamolekun

The Knife London Gave Me: A Short Story by Abenea Ndago