The writers Ivor W. Hartmann and Emmanuel Sigauke have just co-edited African Roar, an anthology of some of the best and most popular short stories to appear on the online e-zine Storytime. Storytime, founded in 2007 by Hartmann has quietly established an enviable reputation for showcasing and supporting the works of young and emerging African writers. As a debut volume of what the editors have promised will be an annual production, it does not disappoint. I must say that I am pleased with what my eyes devoured. This is an eclectic collection of short stories offering ample evidence that African literature is alive and well. New talent rises every day from the dawn of yesterday’s departure. It provokes thought in the sense that the featured writers challenge the reader’s notion of African literature, physical boundaries, and indeed, who we are. Tradition splinters like fragile egg shells as the authors experiment with new forms, and new ideas. It is not always successful, but you come away entertained and informed. 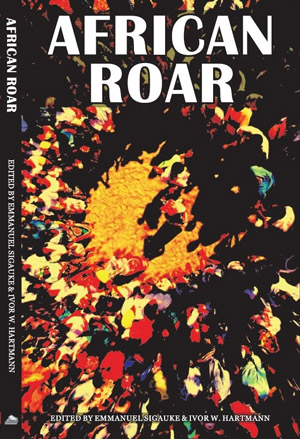 The stories showcase the dizzying and relentless movement of restless people, and Africa stands, seemingly caught in the crossfire of human anxieties. There are all these stories gently excavating African experiences for the world to see. It is refreshing that African writers are beginning to look inwards at the various shades of African-on-African crime ravaging our continent. Welcome to a generational shift; you will not find pot-bellied generals, flinging idealists out of Africa’s windows. Africa is on the move, slowly, perhaps, hopefully, away from deadly caricatures.

Who are these writers? They are mostly young and unknown writers from Nigeria, Ghana, and Zimbabwe; however they are united by their digital citizenry on the Internet. They all live on the Internet, anecdotally, at least two hours of their waking lives. They are also restless, enduring a Diasporic existence way from their land of ancestry; in South Africa, the UK and the USA. There are eleven pieces in this volume and there are so many to adore. As Masimba Musodza demonstrates in the story
Yesterday’s Dog, there are still shadows of past struggles; however, they are fading in the consciousness of young writers even as they feel somehow obligated to document the past.
The piece Big Pieces Little Pieces by the Zimbabwean writer Novuyo Rosa Tshuma exposes the tyranny and dysfunction of today’s patriarchy. It is a dark, disturbing, albeit evocative piece on the insidious effects of patriarchy, alcoholism, marital and child abuse on family and community. One is taken aback by the plight of women and children in Africa caught in domestic and civil wars that they did not ask for. This is a promising short story that could have been greatly enhanced if Tshuma had worked a little bit harder to provide an unpredictable ending. But it is a nice story, nonetheless.  Ayodele Morocco-Clarke proves to be engaging and funny in the tale The Nestbury Tree about the ravages of the new Christian evangelism. It is slow getting
to a climax but it gets there nicely. Ivor W. Hartmann’s Lost Love showcases evocative emotive prose poetry as the main character reminisces on the lost possibilities of a lost love. Its power is in its ability to connect
with the reader on a personal level.

Everybody should read Beaven Tapureta’s, Cost of Courage and Christopher Mlalazi’s A Cicada in the Shimmer.  They are bold and innovative experiments, apocalyptic, visionary, touching, and brilliant:  Dambudzo Marechera, meet Ben Okri. In these stories, there are all these pieces of brainy matter soaked in inspired lunacy. Kudos to Mlalazi for delivering rich deep, intense prose, and for innovation; in his story even inanimate objects become handsome and personable characters. Charming.  Magical realism is not my thing but this was engaging. In all the creative mayhem, the poetry hangs in there, showing all the possibilities of the bold thinker. In Behind the Door, Kola Tubosun deploys his trademark penchant for teasing the wondrous out of the ordinary in a cute story about waiting for the results of an HIV/AIDS test in Nigeria. The suspense builds up, perhaps dies, too suddenly.  Regardless, it is an affecting story. Chuma Nwokolo’s trademark funny cheekiness is on full display in his piece Quarterback & Co. It is a thoroughly British story. This is boundary bending work. It could have been written by any equally gifted white Briton. Nwokolo is a Nigerian immigrant in
Britain. We are the sum of our experiences.

Emmanuel Sigauke’s story, A Return to the Moonlight, sitting smack in the middle of the volume, richly anchors the collection. It is a haunting commentary on the journey away from our being: The shift from the African self continues and finds expression in attitudes, affectations and even in the self-deprecation. The neediness is neatly captured. In Tamale Blues by Ayesha Harruna Attah, the clash of cultures is palpable; the African culture looks positively impoverished compared to the infinite possibilities of what comes from the West daily. It is a lovely little story about Africa – using prose that shows promise and a liberating boldness. It is more than a longing for the flesh. It is about longing and lust for the fast food that passes for Western culture. Eventually the exile breaks down and starts munching on crumpets and sipping alien teas. And we are all impoverished and diminished by it.

I salute Hartmann and Sigauke for sharing the gift of their vision with the world. It is not a perfect production; there are editorial issues that hint at the voluntary nature of this production. Some of the stories are not quite successful; I thought Nana Awere Damoah’s story Truth Floats was an awkward, if inchoate adaptation of ancient Ghanaian folklore. In future editions, resources permitting, it would be great for each story to be accompanied by a review or analysis. This volume breaks down walls. Hear the fences crack and crash protesting the stampede of restless dreams and goals. It is a good thing. The writers ask: Who are we? Chinua Achebe says we are Africans, we are people. And I say, we are the sum of our lived experiences and we will tell our stories as we remember them. Yes.

The Cycle: A Short Story by Toyin Adewale-Gabriel

Lost in Transit: A Short Story by Austyn Njoku

To Hair is Human, to Forgive is Design