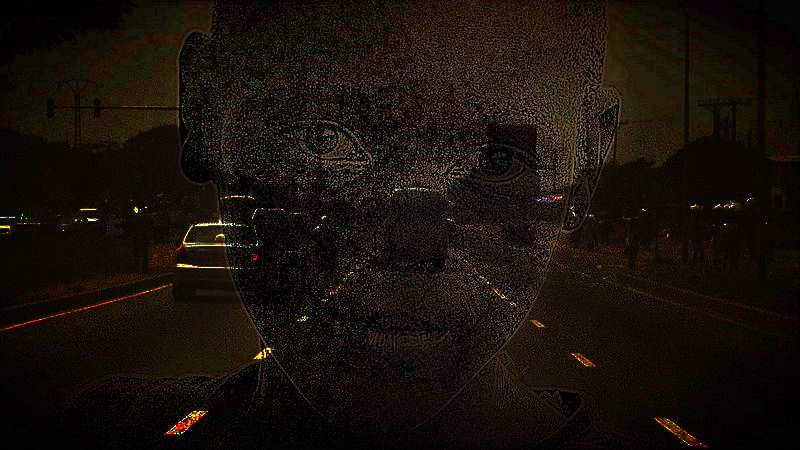 The sun was merciless. The streets were jammed. But this was good for business. Abena weaved through the stagnant vehicles. She was careful of course. She could not keep her eyes on the traffic lights and potential customers at the same time. Abena had to rely on her wits. Her eyes were sharp and she could catch the movement of any vehicle, knowing when it was safe to dart in front of a vehicle and get to the next where potential customers signalled. The real danger, however, came from the motorcycles and bicycles too. She competed with them for spare space, careful not to collide with any as she weaved her way. She had to listen carefully in the buzzing noise. Before she crossed she had to make sure no motorcycle was speeding through the sparse space to outdo the vehicles. The cyclists, they never would wait in line. No way. The ice chest on her head meant she had to be extra careful. Any clumsy move and she was in trouble.  She could not afford mistakes. They always cost her dearly. Aunty Fausty, her good employer, never took kindly to mistakes.

Abena ran over to a large green Mercedez Benz bus with loud talking passengers. Someone was quarrelling with the driver’s mate and most of the other passengers were in support. Seeing the hopelessness of the situation, the mate had given up. Hatso Atomic! The mate shouted calling to attention potential passengers as to where the bus was headed. A man on the other side of the street raised a hand and the bus driver quickly pulled over. Abena was quickly at the windows with her chest of chilled sachet water. Eight sachets, she counted selling before the bus moved away. At this rate she figured she would soon have to go for a re-fill. Business was good today. She was paid an amount on each bag of water she sold. They called that commission. It was early in the afternoon and she had already sold five bags, she had only two other bags placed against the fence where all the hawkers kept their ware. No one stole. The hawkers were always busy to and fro, to the fence and back, replenishing their stock. She visualised the smile on her mother’s face when she got home with a good commission.

Tsssssss! She heard the sound. Unmistakable. Someone was calling. Quickly she looked this way and that. Then she saw where the call came from. The pretty woman was seating in the brand new sparkling car. She sat in the front passenger seat. An older man was driving. Abena thought the woman was in with her father. She rushed to the car but realised a competitor had outraced her. A woman had out-run her. ‘But Mam, I saw you first!’ Abena shouted. The pretty woman made a face as if her eyes would pop out. She ignored the other woman and beckoned Abena. Abena smiled. She had won again. It always worked, this trick of hers. Especially with those in the posh cars. Smiling, she was at the pretty woman’s door. ‘Give me one,’ the pretty woman said, still looking at Abena with some degree of awe. ‘I’d have one too honey.’ The elderly man said. It was then Abena realised it might not be a father and daughter tale at all. Accra was full of surprises like that. Tough City. As she handed over the sachets, the woman said. ‘You speak English.’ ‘Yes Mam, I do.’ Abena answered. The woman handed over five Cedis. Abena quickly put her hand in the apron around her neck and sorted the change. ‘Good English too. Why aren’t you in school?’ That was the woman. The woman looked on, not regarding the change Abena was handing her. ‘How old are you?’ The pretty woman asked. ‘Ten years old Mam.’ Abena answered. She was still running to catch up as the traffic moved. ‘Keep the change little girl.’ The pretty woman said. ‘You should be in school.’ The woman insisted. Wao, Abena thought as she ran to serve another customer. With tips like these she was headed somewhere.

Who knows, maybe she could have her very own sachet water retail business sometime. Some people really never knew, she thought, remembering the pretty woman’s words. ‘You should be in school.’ True, that. She had been in school too. What with the offer of free education and all? She had never wanted to miss the opportunity. But the chance had been spoilt for her on that day. That day when she came back from school. Her mother was sitting gaunt-faced on a stool in front of their door.  They lived in a compound house with a lot of tenants so Abena preferred her mother talked in a low tone if at all she had to be reprimanded but this was not her mother’s way. Especially when she had the little rubber packets of Kasapreko dry gin in her hands. The name of the drink did justice to her mother. Kasapreko in the Akan language translated in English means talk at once. Ah, so her mother gave it to her straight that day.

‘So you are expecting to eat hmm! Abena. You do not know you are a big girl. I have to provide every day, you think it is easy.’ She sipped some more from her Kasapreko package. ‘Mum,’ Abena started. ‘Shut up! Shut up! Shut it girl, before I tear you into pieces!’ Her mother had screamed and that had done the trick. Abena had shut up. Fuelled on by Abena’s silence and Kasapreko, the mother had continued the offensive. ‘Oh I am cursed. Whatever made that worthless father of yours Kweku Pra pass my way. Adjoa your big sister is with her father Kodzo Ga now as I speak. Kesewa who I bore for Franky is in school now being taken care of by her father and Adjei my only boy, you were here when his father Tanko came for him to the North. Two of you I have birthed to that useless father of yours Kweku Pra. Efua your elder sister and you. Efua just left home now. By the time she comes home she will bring money for food. You say school, school, school, shall we eat school? See how Mr. Evans always passes by to drop money and food for Efua. That is a smart girl. Right now as I speak, she has gone to visit the new bank manager across the street. She will not return empty. And you, worthless, Kaaai!’ Then her mother had cried buckets.

The next day after school, Abena had not come straight home. She had gone over to Mr. Wasa whose house was not too far from theirs. Mr. Wasa had always joked whenever he came by. He circulated bills, and worked for one of the utility providers. ‘Eii so Abena, when will your mother allow you to come and do some washing for me?’ Mr. Wasa would say to which her mother always replied with likes of, ‘Me, have I a hand in this matter? Talk to her, she is not wood, she can hear you.’ Abena had not thought further of it till that day after her mother’s tirade.

What happened at Mr. Wasa’s place was too painful for Abena. Though Mr. Wasa had encouraged her and told her they had not been able to get on with the act because she was too tense and that she should relax on the next occasion, there was no next occasion. Mr. Wasa had parted with a gift of ten Cedis. The next day she had gone to see Aunty Fausty and gave up school for selling ice water. Now her mother could not complain. Efua might bring home more than she could but she also brought in her fair share. After all Efua was four years her senior.

That was a year ago. Now there were hardly outbursts from Mummy. There was food at home and she could buy her kasapreko dry gin every night. Tssss!!! Another call and Abena runs to attend.

Etornam Agbodo writes short stories, poems and novels. His writing is mostly inspired by his day to day confrontation with Africa and the world at large.

Nigerian Literature at Fifty: A Coat of Many Colours

Untitled: An Excerpt by Mkhu Mpofu