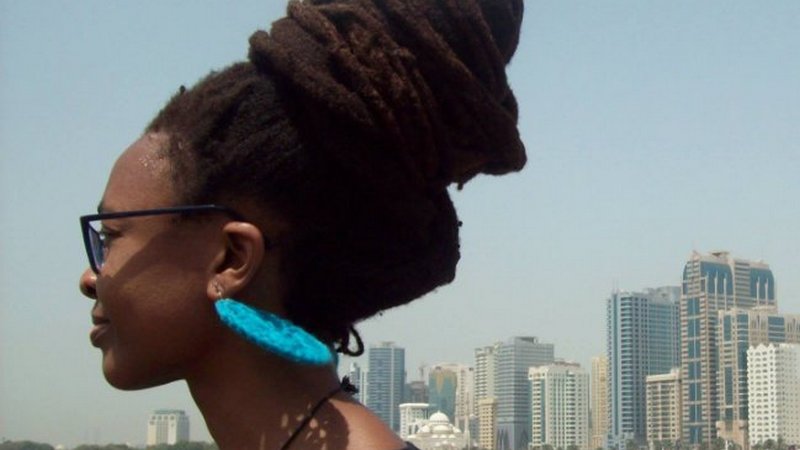 Nnedi Okorafor is an important writer, period. She is one of the most prolific writers working today, and certainly one of the most notable in the field of science fiction and fantasy. Her works include books for young adult: The Shadow Speaker, Zahrah the Windseeker, novels Who Fears Death, Long Juju Man, Akata Witch, Lagoon, and Binti. She has received critical appraisal all around the world, including the Wole Soyinka Prize for Literature in Africa (2008), the Carl Brandon Parallax Award in (2007/2008), the Macmillan Writer’s Prize for Africa (2007/08), World Fantasy Award (2011), and the Nebula Award (2016). Shortly after the release of her book Lagoon in 2013, I interviewed her for NTLitMag and The Guardian. That was three years ago. After the announcement of her novella Binti as the winner of the Nebula Award (for which her first adult novel Who Fears Death was first nominated), I caught up with her again for a short conversation about her craft and her place in the writing industry. Enjoy. 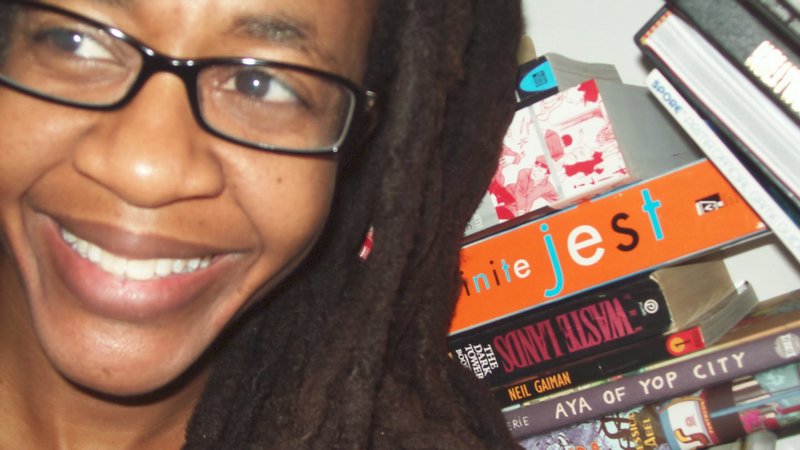 Kola Tubosun: Congratulations on your Nebula award for your novella Binti. The prize has been described as “the science-fiction and fantasy equivalent” of the Emmy Awards. That must feel great, doesn’t it?

Kola Tubosun: I saw that your earlier novel Who Fears Death was also nominated for the Nebula among other prizes. How does it feel to have reached this stage of recognition in your career? Was it something you expected from the beginning?

Nnedi Okorafor: When I first started writing, I didn’t come with any expectations. I just loved to tell stories. I’ve never expected awards. I don’t have any list I’m checking off. You can’t control awards. They’re not really up to you. They are up to others. Thus, why expect them? It’s a surprise and an honor each time it happens. When I heard my name called at the ceremony, total and complete shock.

Kola Tubosun: You have, deservedly, arrived at a position of strength as a writer of note, particularly in a field that isn’t often associated with people of colour (fantasy, sci-fi, or magical realism). How does that affect your work and your opinion on the industry?

Nnedi Okorafor: It means I’m read more. It also means that what was perplexing and risky to Western publishers only a decade ago is not so perplexing and risky any more. It means that writers of color who come after me won’t have it so tough. My opinion of the industry has never really been that critical, but I chalk that up to ignorance. When I got into all this, I didn’t study statistics or trends or whatever. I knew it would have its isms, but that was expected. I just kept going and waited to see what happened. And when I met gatekeepers, I dunno, I just kept it moving and sought out those who could see and hear me…and I found them. I grew up in this country and I was raised by Nigerian immigrant parents who had a “barrel forth regardless” mentality.

Kola Tubosun: I’m familiar with your irritation at being sometimes omitted from popular media lists of African writers making waves in the West. Most lists mention many other writers writing “mainstream” fiction, but not fantasy. What do you make of it, and why do you think this is the case?

Nnedi Okorafor: I’m not sure what irritation you are referring to, as this is not something I spend much time discussing or even pointing out. I’m also not one who is obsessed with seeking attention. That said, I do think there is still a bias in Western imaginings of African literature against science fiction and fantasy and works that are categorized as “genre writing”. The Western media has this idea of African literature and that idea is VERY limited. On the flip side, my work has been well received in Africa. I’ve been invited to several literary festivals and events in South Africa, Gambia, Nigeria, Kenya and Tanzania and have my work published in Nigeria.

Kola Tubosun: When I was commissioned to write a profile of your novel Lagoon for Literary Wonderlands, a book about “the greatest ‘created’ worlds of literature”, last year, I realised that yours was the only work written by an African (or “Black”, if you will) author on the list of 100 works around the world and over many generations. Are you surprised?

Nnedi Okorafor: As I said, I came into this with no expectations. It is what it is and I roll with it. 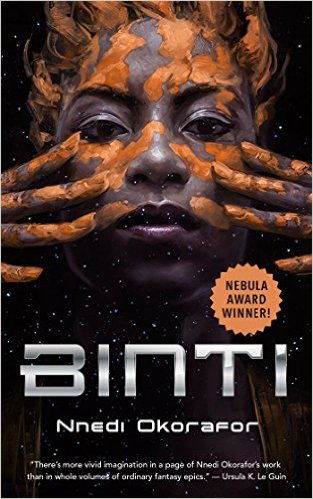 ola Tubosun: One of the problems you’ve hinted at about the reason for the lack of diversity in the publishing of fantasy and sci-fi is the limitation placed by the gatekeepers. The success of your work has proved that there is a receptive audience out there. How do you think we can expand this audience as well as expand the list of writers of colour in sci-fi writing/publishing?

Nnedi Okorafor: I’m not strategic in this way at all. I just have stories to tell and I tell them and put them out there as best I can. I think if other writers in Africa and of the African Diaspora did the same, pushed in their own unique ways, from various points of views, imaginations, writing styles, etc., things would improve and broaden. But I think that writers need to focus on the souls of their stories first, not strategy

Kola Tubosun: You said that Binti was inspired by a jellyfish in UAE as well as your moving out of Chicago to New York. Tell me about that.

Nnedi Okorafor: I was miserable at my professorship at Chicago State University (that’s a story in itself). Then the University at Buffalo, NY came along and made me a wonderful offer. I have been living in the suburbs of Chicago since I was 11. I also come from a very tight “Nigerian-in-America” family that was VERY uncomfortable with me taking the job. I went anyway. My family did not react well to this. Just before going to New York, I also went with my daughter to Brazil and the United Arab Emirates for invited author events (this was where I saw the first jellyfish I’d ever seen in the wild). My family did not approve of this trip, either. When I arrived in Buffalo, NY, I experienced a very isolated, uprooted, cold time. This was my mental state when I sat down and started writing. I’d left one world for another, but I took my self (which carried family, culture, etc.) with me. And I was afraid of the consequences of my choice. Binti came right out of this.

Kola Tubosun: You once talked about working Nollywood through Tchidi Chikere. There are also other subtle references to a “secret project”. How soon until we see one of your works on the big screen? And what can you tell us about this secret?

Film is not something that happens quickly, especially for someone like me writing what I write. The doors in are not in the usual places. I will say that there is a lot going on that I can’t discuss publically. Let it marinate for a bit longer.

The secret project with Tchidi (sounds odd calling him “Tchidi”. To me, he’s Tee) is small and unique and hilarious. It involves the BBC and we’re in the final stages of it right now.

Kola Tubosun: What other writing projects should we expect from you in the nearest future?

Nnedi Okorafor: Binti 2: Home is scheduled for release January 2017. Akata Witch 2’s release date has been pushed back to 2017, due to my editor leaving and me working with a new editor. But the book is written (has been written for nearly 3 years) and just needs editing. And I’m working on a novel called Remote Control of which I hope to have a clean draft (the current draft is dirty as dirt) done by the end of this summer (let me stress the word “hope”). There’s one other project, but I can’t announce it yet.

Kola Tubosun: What is your vision for the future in sci-fi/fantasy/magical realism, especially for African stories? How do you want to be assessed and remembered?

Nnedi Okorafor: It’ll be what it’ll be. It’s not in my hands. I’m just one of the storytellers. The only vision I have for it is that it’ll expand and continue to “wow” readers both in Africa and around the world. How do I want to be remembered? Geez, I’m just getting started. So we shall see.

Kola Tubosun: Thank you for talking to me.

Kọ́lá Túbọ̀sún is the author of the chapbook Attempted Speech & Other Fatherhood Poems. His works span the intersection of literature and linguistics. He can be found on twitter at @kolatubosun, on his blog at KTravula.com, or at YorubaName.com where he’s curating a multimedia dictionary of Yorùbá names.

A Season of the Great Lake: An Interview with Mukoma wa Ngugi

In America: A Short Story by Maik Nwosu

Chris Msosa
We use cookies to ensure that we give you the best experience on our website. If you continue to use this site we will assume that you are okay with it.Ok