Recently, Professor Niyi Osundare, poet, scholar, essayist, humanist and patriot turned 60. Unfortunately, the Nigerian environment was most unreasonably saturated with a lot of animal noise and needless tension as a result of the unwholesome and primitive politics that appears to have found fertile ground in these parts, and so an event of such magnitude was grossly under-marked and underreported.

Sadly, instead of Osundare and his sterling contributions to literature, society and the academia dominating the public space on such a time, exasperating din from mere empty containers, who have done nothing but bleed Nigeria pale since they inflicted themselves on the nation as politicians and resilient leeches, grabbed the front pages.

In a way, that would seem an apt reward for Osundare himself who has over the years used his poetry, essays and public speeches to vigorously combat the ills these people nurture and represent in his consistent struggle to see Nigeria emerge as a strong, decent and well-governed nation, which everyone one of us would be very proud to call our own. 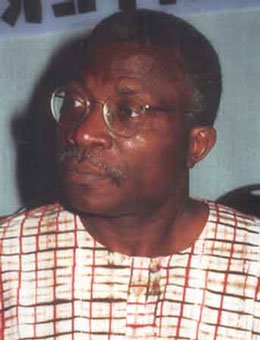 Osundare’s commitment to his fatherland has remained exceptional. Even in the most hazardous of all times, he had refused to abandon the country, preferring instead to stay put at Ibadan, for his students and Nigeria. His various interventions, usually crafted in very strong but unique and exceptionally beautiful language, has jolted dictators, emboldened the populace and generally contributed rare insights and motivations to the struggle for a better nation.

The literary community, however, defied the depressing mood of the time, and stood up to honour one of its extraordinary giants on his sixtieth birthday. Readings and lectures were organized at several literary spots to mark the event.

Although I got the invitation to attend the special reading in Osundare’s honour on Saturday March 10, at The Jazzhole, Awolowo Road, Ikoyi, I could not make it. The Association of Nigerians Authors (ANA) also met at the National Theatre that same evening for its monthly reading, which it dedicated to the great poet. There were other equally exciting gatherings of the tribe at other venues in Ibadan and Lagos and Ikere Ekiti, where the leading poet was, was most deservedly, wrapped with shinning encomiums and celebrated with enchanting chants.

It is now widely accepted that Osundare is Africa’s finest poet. His way with words is distinct and rare. It is impossible to read Osundare’s poetry and not be awed by his great insights, and overwhelmed by the great talent he betrays, and the exceptionally overpowering way he deploys words to great effects. His ability to create very vivid and lasting imageries in the mind of the reader, the rhythms he realizes so effortlessly, and the deep, fresh meanings his poems yield each time one reads them, are what, in my view, makes his work stand out all the time.

Osundare’s 1988 collection, Moonsongs (Ibadan: Spectrum Books), remains my favourite of all his works I have read, and each time I want to thoroughly enjoy myself, admire exceptional talent and immerse myself in the overwhelming power and exhilarating aura of well loaded words, I always go to Moonsongs. And like the poet sang to the moon in the book, I would implore his poetry to “mother me in the surging valley of [her] knowing bosom”.

Perhaps, it is only the moon that can “heal the scars of wounded winds” as the cricket, perhaps, overwhelmed by the immaculate brightness of the full new moon seeks to “slit night’s silence with the scalpel of its throat.”

It is impossible to read Moonsongs, and not see yourself under the immaculate brilliance of a moonlit night. It is so pleasantly real.

Though a great and loud admirer of Osundare, I have neither met him nor made any attempts to do so, but as I read Moonsongs once again, to mark his birthday, I longed for a full bright moon to “spread” across the sad Lagos “sky like a generous mat“, to illumine my environment, and sack the gloom and darkness that has become an inevitable feature of existing in a badly run country like Nigeria, so I could compose and sing my own “moonsongs” to celebrate this great bard. For which day would be most appropriate to do this than on a moonlit night, when the smile of the moon “ripens the forests”, and men and women are bathed with its golden glory.

The moon and I will sing tonight.(Moonsongs, p.1)

I derive immense pleasure from devouring any essay, poetry or interview by Osundare, or anything written on him or his work. I make it a habit to update my collection of materials on him. His words carry almost that same sagely weight, insight and originality that one hears only in the likes of Chinua Achebe.

It is always painful to remember that we would have lost Osundare to Hurricane Katrina which wreaked havoc in some parts of the United States in 2005. When the toxic water took over their apartment, Osundare and his wife fled to the attic and were there in the intense heat, without any drinking water, food, electricity, or any means of communication for 26 hours. Later they were rescued by a neigbour who had come around with a boat, perhaps, to pick some things from his own house.

“That was our escape”, Osundare told the Voice of America (VOA) in October 2005. “It was purely accidental. If our neighbour hadn’t come, we would have been part of the statistics by now.”

At the time this disaster occurred, Osundare was a professor of English at the University of New Orleans. And when he wrote the following words in the dedication page of Moonsongs,  it was doubtful if he ever thought it would one day celebrate his own triumph over death in New Orleans:

all who stood for

with a cavalry of howling axes and death suddenly sprang

from the armpit of waking stars

But Earth said No

to their crimson plot…

at our forge of busy bellows

We shall break many

on the elbow of the river

deep, ever so deep,

We are grateful to God that Osundare survived Hurricane Katrina. Although he had lost to the floods most of the things he valued so much: his books, manuscripts, computer files and more, I agree with the person who said that what he has is greater than what he lost, for the brain from where the contents of those lost manuscripts emanated remains fertile and active.

This is wishing the great poet, scholar and crusader many happy returns of the day.

Ugochukwu Ejinkeonye is on the Editorial Board of the Independent, a national newspaper published in Lagos, Nigeria. He writes a highly regarded column, (SCRUPLES) on the back page of the paper every Wednesday. eMail. Blog.