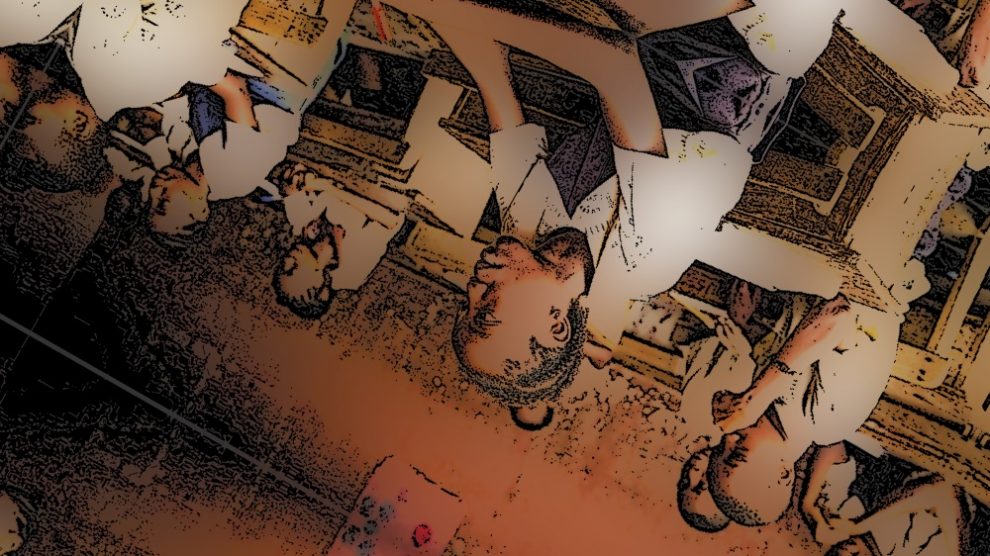 MEMORY IS A FLIPPED CLASSROOM

The past is a hind mirror you sometimes need a new glass for, the reflection is enigma,

Flints of shadows, images recoiled as they are; they are not by some mercenary tellers.

You wrestle to hold its face in your head against the run of things. It races at you,

Comes chameleon ready but already leaves you footnotes of times it once visited.

where fate kept them, never call them students of memory. Not seers too,

neither learners of signs. Amnesia, the drudgery of memory is when:

The tyranny of the past is the hounded present,

For merchant calligraphers must dance to a present rhythm, to ward off poverty,

That lexeme, endemic in mass skins and isolated by Naija plutocrats, drowns logic.

Memory is a flipped classroom, millions merged on the other side-amnesia,

Memory is when signs speak to you in polyphonal tongues

And you weave icons as fluorescent sight to many flattened in

The steep depth, graveyard of forgetting, the holocaust years past and now,

You are, like the infant smarting its lips after a- once- in- a while juicy meal,

through this auspicious immediate cool off, remitting smiles in snatches, we are forever

Settling into the bliss of bloated numbness while hounding remembrance on exile.

I live through this exile, where most, inured by history’s fractures, choose to forget that

my country is no more. They think it still exists, at least in physical terms,

but that too, is no debate rattling heads who know the indigo of trauma:

There was a country, there was memory and now, nay-tion exists as memory.

Amnesia is content with forgetting, foe to memory or its cemetery

Achebe is a teacher, memory, his classroom.

Only those who flip through the pages of memory, find the truth in his evergreen woods.

His feet died out over that distance after a goodbye,
The one that now is the last, we didn’t intend, never reckoned
Will come so soon as children of the sun.
Efe,
now your father searches your footprints through
the sea sands of Umueze to Ogbowele,
Sends prayers, undulating through Atakpo to reach your ear.
Did the wind bring you my whispers, the dreams in our heads?
Spread and waiting to dry like cassava flakes in a hot sun before
Frying at the mud-fiery hearths.
Are we not all travellers? Waiting for last goodbyes
We don’t know of?
The first leaves,
The last traveller, waiting for another goodbye upon
Witnessing the first candle burning out in his gaze, and passes the baton,
That no one else might bear testaments to, as the first is the last,
And sometimes, the last is the first for one, whose breath
Gets the honour of a dirge or requiem kin. One who writes this epitaph,
Becomes the last traveller for those who leave here before him.

HOW A POET MAKES LOVE

The first love a poet makes is to words
In the lustful colours of night.
The second is to sound
The rhythm of god’s laughter
The third is to thoughts
Naked and seeking company
In the cold grass of fertile mind
The poet makes love to things
Seen
And thought
The spread of river is a poet’s muse
Gathering mermaid’s spirit into bed
The poet grinds words, in rhythms
Sculpts thoughts into clothed garments,
Into things
Grasped
And felt
The poet lies finally
In the belly of
The river and makes love
To flesh and sand
Kneaded in words
At ghostly nights.

Ndubuisi Martins (Aniemeka) is a Nigerian poet, an emerging literary theorist and critic. His work has appeared or is forthcoming in some notable poetry journals: African Writer, Ngiga Review and elsewhere. He lives in the ancient city of Ibadan, which is renowned for exporting to the world, iconic African poets and critics.

The Hawk no more has Claws: Poetry by Olubela Christopher Oluwamurewa

Abubakar Gimba and the Literary Excursions in Niger State

The Flight of a Minstrel: Poems by Al-kasim Abdulkadir