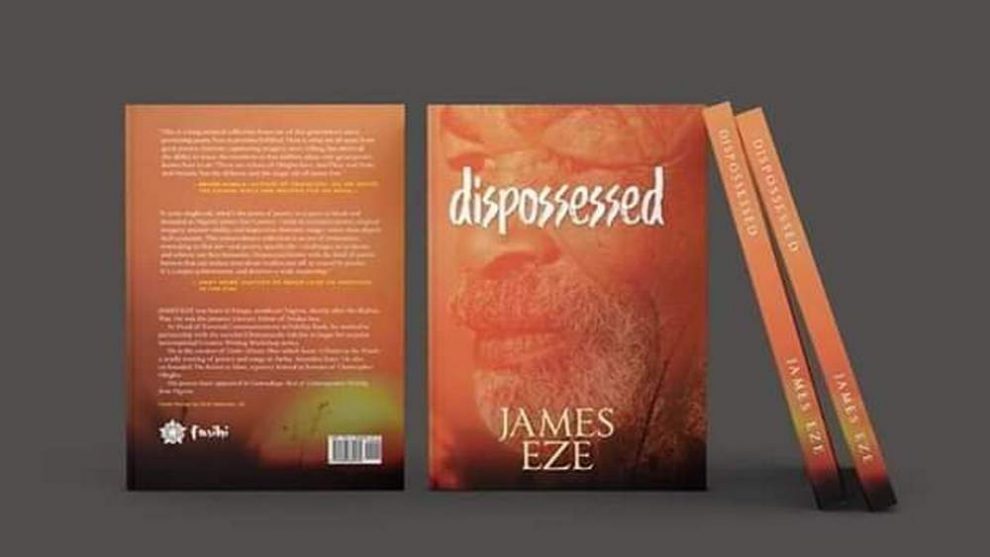 dispossessed reads like a bildungsroman, a sequence of growth and becoming captured through poetic essence. It reads like a station of the crosses with itinerant stoppages at various stages of the poet’s self-awareness and development. Symbolically speaking, the various stages in this collection are akin to man’s stages of growth; infant, youth and adult, that pilgrim-like movement from the early days of a kite’s birth, when its wings are still shaky and unsure, to its pubescent attempts to fly, to understand its environment and accommodate its kind and to its eventual mastery of the art of flying and the eventual possession of the skies.

Stratified into three; “innocence,” “transgression,” and “atonement,” dispossessed is James Eze’s debut offering, chronicling his early intimations with the art of writing, his attempts to make meaning, his doubts about his genius, his young days and what time made of them, his love for man, woman, children, his heartbreaks, failures, sorrows and disappointments in his sincere attempt to understand what it means to love, his fulfillments and the joy that is his in knowing that in all these there are still people he can call his own, in true love and finally, his religious standing, his affiliation with the tribe of the hated, his allegiance to truth and peace and his patriotism to his nation.

In “innocence,” James Eze introduces us to himself and his early stages of creative growth and the artistic call of duty he feels bound to answer. The poem “i am” reads: “i am the oxygenated laughter/ of africa’s ruptured civilisation/ rebounding with sturdy steps/ to reclaim its missing soul”. He concludes by saying “and now i stand/ in this hallway of dreams/ … i am a song in want of an audience” (6-7). From this point, the persona moves to “here i am”, affirming his visions again, stamping his feet on the ground, from where he’d stand to sing, to tell the world that in this dawn of swallowed tongues, there are still a handful of griots undaunted by the glinting talons of vampires who crave the blood of fearless prophets:

In as much as there is beauty in the poet’s categorization of the poems in this collection, I do not subscribe to the poet’s designation of the second section as “transgression.” Be it for want of a better caption or to fully justify the transcendental phases of his pilgrimage to the final stage of atonement, I believe that since this section is largely about love, love and nothing but love, a better caption would have done us a lot of good here where the persona serenades us with beautiful love transcripts that remind us of Pablo Neruda, Dennis Brutus, Barry White, Celine Dion and Ed Sheeran rolled in one. Hear him in “i found love”, a poem no less inspired by Ed Sheeran’s “Perfect”: “… we survived the rains with the sun in our hearts/ and we laughed when life wagged a finger in our face/ because we knew that in the end, love would win this race” (35). So, is there something the poet is seeing that we are not?

“atonement” is worthy of its name. It is a purely ritual attainment of artistic maturity, a maturation that manifested even as the poet-persona blooms with time through the corridor of introspection, touching on all things that demand to be touched with conscious poetry. The poetic engagements here, the thematic preoccupation of James Eze in this section, does justice to his earlier pledge in “innocence” to “reclaim africa’s missing soul.” From paying homage to Christopher Okigbo, of whose “tribe of defiant minstrels” (105) Eze counts himself as a member, to Gabriel Okara, to the 75 heroes of Igbo Landing in 1803, he fondly remembers, in mourning, victims and heroes of the Biafra war; a theme any conscious Nigerian poet cannot overlook even though Eze could be accused of helpless fixation to that theme. He extends his concerns to the victims of religious wars in northern Nigeria, especially in Jos and Kaduna, a war no less fanned by selfish leaders who ensure that religion and faith are locked in one cell room. He visits Benue, the where the worst victims of Fulani herdsmen reside and the church massacre in Ozubulu in Anambra state. The results are heart-wrenching.

Eze wins my soul with his poetic reply to Ken Saro-Wiwa’s “epitaph for Biafra” wherein the late environmental activist mocked dead Biafran soldiers and some of his erstwhile comrades on the side of the new republic. In all I have read as a serious aficionado of African poetry, tributes to Saro-Wiwa sound like hypocritical hagiographies to me. But here is a different perspective to that ritual of hypocrisy:

Is this collection perfect? Not really. For starters, there are in fact some poems in this collection that do not fit thematically into the corpus. A handful of poems, especially some of the shorter poems in “innocence” and “transgression” would have fared better outside this collection, published either as singular poems in journals or as contributions to online poetry blogs. They appear in this collection like a group of babanriga-donning gatecrashers in an event where the invited guests came in suits.

In some poems, the poet sometimes seems to forget to stop. There are poems that are expectedly meant to stop at some stanzas or lines, the poet’s muse appears to lure him to shoot across the runway, dovetailing into unnecessary lines that attempt to drag the poems, yet they manage to stay put. For instance, in “dear mama”, one might expect the poem to end where he says “and though the destination is not yet in sight, mama/ i am putting in work and hoping that someday heaven will bless the just/”. This is where the full stop, in my view, should have come. But he goes beyond to now ask: “dear mama, please tell me, are you proud of me?/ or would you have wished for a better man than the one you see?” To me, this is superfluous; why ask your mother if she is proud of you when you already affirmed that you are “just”—which mother would want a “just” son to become unjust? There are a few more of such excesses, or what we might term “over-writing”.

Nevertheless, in his audacious attempt to make large statements using small letters all the way—like the English poet e.e. cummings—while also making sonorous music, James Eze manages not to fall off key. In the end, what dominates, what persists after one has closed the book, is a mature, beautiful and timely orchestra that beams a touching light of concern on life’s lofty dreams and harsh realities that demand to be felt. Magisterial!

Jeremy T. Karn: The Gospel According to Eric

How the Weather in Dubai Changed the Climate in Ikerre-Oti

Victor Daniel
We use cookies to ensure that we give you the best experience on our website. If you continue to use this site we will assume that you are okay with it.Ok