The text message was short and sharp and to the point: “Your friend Dennis Brutus died early today”. It was December 26 and I was in my village getting into the groove of the Christmas season. The message came from my friend and brother, Jossey Ogbuanoh, who had been my colleague in the defunct THISWEEK magazine back in 1987 when Dennis Brutus used to visit with me in the office once he was in Nigeria. Over the years most of my Nigerian friends have wondered at the letters I used to get from Brutus, the legendary South African poet, author of A Simple Lust, Letters to Martha, Sirens, Knuckles and Boots, etc. Brutus and I have travelled the Lagos streets, and he lamented the shame that there were still open drains on Nigerian streets. But Brutus was not all complaints and seriousness, for he once suggested that we should co-author a book of erotica! 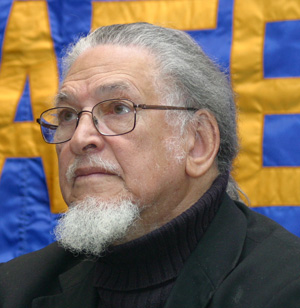 In 1989 I was appointed a Distinguished Visitor at the Graduate School of Journalism, University of Western Ontario, Canada. I travelled to Canada and put a call through to Brutus who was then the head of the Black Studies Department of the University of Pittsburgh, USA. He immediately invited me over to deliver a lecture to his literature students.

As I had only a single-entry visa into Canada I could not possibly travel out of the country and be allowed back in. The celebrated Zimbabwean journalist Geoff Nyarota who was with me in Canada wondered aloud why I needed a visa in the first place to get into Canada when as a fellow Commonwealth citizen he had not travelled with a visa from Zimbabwe. I simply told Geoff that the Nigerian was the exception to every rule before travelling out of my London-Ontario base to Toronto to process the American visa. Of course the American Consulate in Toronto refused to grant the visa as I had only a single-entry Canadian visa which pointed to the fact that I planned to migrate to the US. I pointedly told the white American visa officer that I would make him reverse his decision because of my “intimidating connections”.

Back to my Primrose Hotel lodge in downtown Toronto, I called my hosts in Canada, and Professor Peter Desbarats advised me to extend my stay at the hotel for another week while he made necessary contacts to reverse the visa refusal. I called Dennis Brutus who threatened to take his protest to the American Congress! I then called the top editors of Canada’s Globe and Mail newspaper and magazine, John Cruickshank and Peggy Wente, whom I had earlier interacted with. In no time at all, things started happening. The American Consulate in Toronto got more protest letters and fax messages than even their huge offices could contain. The American Consulate had the good grace to beg me to come back and take the visa!

It was instructive that a black man was on hand to attend to me when I got back to the Consulate. He made all the genial apologies and granted me a multiple-entry American visa. Curiously, when I flew into the United States in a plane named Canadian Partner I did not have to pass through the international wing of the Pittsburgh Airport. To that extent, I did not even need the American visa in the first place. It was like flying from Ikeja to Calabar: no Customs, no Immigration, nothing. I simply walked into the American wonderland without even setting eyes on the people Dennis Brutus had dispatched to the international wing of the airport to receive me!

I settled into Ramada Hotel in downtown Pittsburgh after the suspicious hotel staff had called for the confirmation of Dennis Brutus and cross-checked his credit card. The taxi man who came to pick me up the next morning happened to be a fellow Nigerian stranded in the US!

My lecture at the University of Pittsburgh’s Centre for Black Education and Development dwelt on Ngugi wa Thiong’o’s Devil on the Cross, a novel I posited vide the wanton capitalism that America represented against the oppressed Kenyan peasantry that the heroine Jacinta Wariinga underscored.

After the lecture I helped Brutus to run his office. I sorted out his mail, tearing the useless letters of fellows asking for odd favours and filing the relevant ones for his later attention. He told me how he unwittingly used to tear up cheques sent to him without actually opening the letters! He would only get to learn much later that he had torn a cheque following further inquiries by the sender. On the many books regularly sent to him by diverse authors, Brutus said he would ask the authors if they wanted “nice noises” from him or a real critique.

Hi pet project then was the Union of the Writers of the African Peoples (UWAP). Our walks round the campus took us through the bar and the restaurant, the library, the conference centre hosting the Russian-American “Chittaqua at Pitt” international seminar, the many gardens where Brutus poetically analyzed the flowers, the bookshop etc. It was at the bookshop that I fell in love with a dictionary, and I insisted that Brutus must buy it for me.

“That’s not how to ask for a favour,” Brutus said, astonished.

“But I want the dictionary just the same,” I maintained.

That’s how I became the proud owner of Webster’s Encyclopedic Unabridged Dictionary of the English Language that set Brutus back by almost 100 dollars! The book is so heavy that the fire that burnt my library the other time could only consume a handful or so of its pages!

And finally, I am just coming to terms with the loss of my dear friend Dennis Brutus on December 26. He was shot in the back with a deadly gun by the goons of the Apartheid regime and he was jailed in the notorious Robben Island prison alongside Nelson Mandela. He more than any mortal played a pivotal role in the exclusion of Apartheid South Africa from the Olympic Games and sundry international sports. Above all else, he was an immortal poet who penned “Somehow we survive.” Adieu, my great friend, Dennis Brutus.

Six Heads and the King’s Body: A Short Story by Konye Obaji Ori

The Philosophy behind Flame Country: Poems by Abigail George