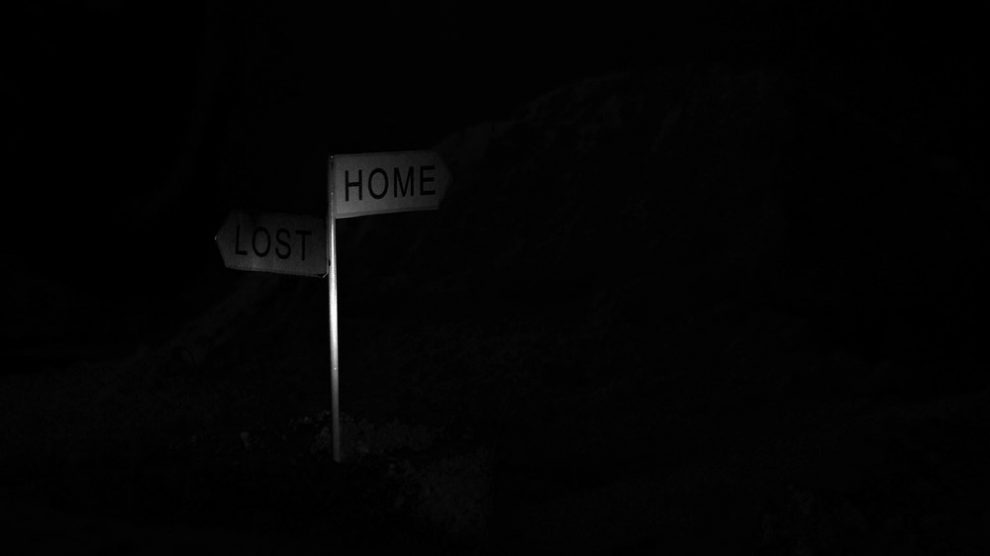 She was making dinner when they made the announcement on TV.  She looked up from mashing potatoes – they had just finished showing details of the President’s latest trip abroad – and there was the picture, filling the screen, the protruding forehead, the thin mouth. And she knew even before the announcer spoke what it was for, and her heart skipped a beat. It was the same girl – there was no mistaking those features, that look. She looked happier in this picture, smiling, no tears running down her cheeks. She wore a school uniform, brown with a red school crest emblazoned on the left pocket, and below that the picture was cut off.

“…haven’t seen her for 3 days now, asking anyone having information on her whereabouts to contact them or the nearest police station. The number to call is….”

and so on, the announcer went, repeating himself over and over, forever it seemed, whilst she sat and looked at the picture.  It filled the TV screen, magnified so you could see the little details: the pimple to the left of her nose, the suggestion of little white teeth in the smile, the faint dimple in her right cheek.

She couldn’t, at that moment, have told you what she felt. It wasn’t an absence of emotion. Rather it was what emotion was before it could be accurately described by words. Now they made her picture smaller, floated it up to the top of the TV screen, placed it to the left of the announcer. He was dressed in a black suit and a red tie, and his face remained carefully controlled and neutral as he spoke, the professional detachment of newsmen and doctors everywhere. The girl’s picture finally disappeared, replaced by news of a war going on somewhere, with hundreds of people getting killed. The newscaster read on in the same flat, unemotional tone, but she wasn’t hearing him anymore except as a background drone – her thoughts were far away. She stood up, mechanical, potato mashing spoon in hand, still staring at the TV screen but not seeing anything on it. Then they cut to a commercial, and the shifting colors of the screen – from the sombre dirty greens and rotting yellows of war to the conditioned reds and blues of TV ads – brought her back from whatever place she had gone to, back to her living room and the problem of dinner. She put some foil over the half-mashed potatoes, put them away in the fridge, returned the unopened sardine tins to their place in the food lockers. She turned off the TV and the lights, double-checked to make sure all the doors and windows were closed. Then she went to her room, changed into her night clothes. She turned off the lights and lay in bed, hands behind head, gazing up at the darkness that was the ceiling. For a moment she lay like this, trying to blank her mind, fighting off the image of the girl as it fought to come to the fore of her consciousness. Then she lost the fight, and the picture came, in its full magnified TV-screen glory, and she felt a sinking weight in her chest.

She had seen the girl that day, on her way home from work. There had been a traffic jam, and she had been caught in it, her chauffeur shouting at the other drivers in the confusion of traffic outside his window. She had sat and looked distractedly out of her window, feeling the heat and the sweat running its way down her back, almost irritating, yet soothing the areas of skin it passed. She was thinking of this quality of sweat, of how it made you stink and look flustered, yet ultimately gave you relief, when she saw the girl. There were hundreds of other girls passing, on their way home from school, but what drew her attention to this one was the tears running down her cheeks. The way she cried: silently, standing at the side of the road, eyes red and wet, sniffing back snot. The way the tears made her an island in this traffic of people, no one noticing her, everyone passing her on the road and walking on without a backward glance. The way she stood, patient, independent, not expecting any help from anyone, self-sufficient in her misery.

She rolled down the window of the Jeep and leaned out.

The girl looked at her.

“My, sniff, sniff, my driver didn’t, sniff, come to, sniff sniff, pick me up”. She was the same age as Mengeh would have been. What you saw as you looked at her: an only child, a mother and a father who loved her, perhaps an uncle and an aunt living in the house too, a driver who came to pick her up everyday after school. Friends she was in the same class with, giggling about boys at break time. Coming home from school excited about the drama they were going to perform in front of the parents on Closing Day. Like Mengeh, she kept thinking. Kept reminding herself not to think.

“Where do you live?”

But what could she do with her? She didn’t live anywhere near Brikama. She couldn’t give her a lift. She couldn’t take her home with her – this was someone else’s child. This is not Mengeh, she kept telling herself, I must not let myself get carried away.  Her driver was looking curiously over to see what was going on, peering over her shoulder to see who she was talking to out there. When he saw it was only a girl, he went back to his former position, resuming the battle of words with the other drivers. And for a moment she wanted to scream at him, to say “Yes, it is only a crying girl, but she could be lost, she could be in trouble. You could at least care”. Once upon a time she would have let herself go like this too (“I don’t care if he is my friend and means well, he has no right to say there is nothing anyone can do”). Now she had learnt better self-control. Or perhaps only how to entrap herself, her true feelings, to put them in a cage deep within her and not let them get a peep out.

“OK. Stop crying. Your driver will come soon, OK? Just stand and wait for him”, she said, finally, not knowing what else to say.

The girl nodded. There were no tears now, only the red eyes and the sniffing. The driver would come soon. He was probably just late today, had had a puncture, had had to run too many errands, had lost track of time. A traffic policeman had arrived, and the confusion of cars was gradually being sorted out, her Jeep moving in starts and stops towards the highway and accelerating freedom. She rolled up the window of the car, smiling in what she hoped was a reassuring way, as the glass came up between them. What more could I do?, she thought. Her driver’s probably late, she thought, and will be here soon.

Maybe there had been a kind stranger for Mengeh too, one who had leaned out of a car window and smiled, and promised her she would go home soon and not to worry. Then, when her picture was on the TV later, did this stranger see her and feel guilty? Did they lose their appetite and put their dinner away? Did they go to bed and lie in the darkness and try to absolve them-self, convince them-self they had done everything that could reasonably be expected?

Perhaps she should contact the mother. Get the parents’ number from the TV station, call them up. Hello sorry to disturb you but I saw your daughter on the day she disappeared. What did you do to help her?, is what she would have asked, if someone had called about Mengeh. And she would have been angry at them when they said Nothing, yelled at them down the phone, threatened to kill them if she ever saw them, her anger floating on the almost-relief of finally having someone to take this whole thing out on. Her desperation as the police searched and searched and never found  a single clue, her despair finally as the days piled on top of the disappearance, diminishing the likelihood of finding Mengeh. This is what she would have done, irrational as it was, and this is what made her think twice about calling, this fear of being on the receiving end of a mother’s anger.  The day the police chief gave her a call. We’re sorry, but we’re afraid we must file your daughter’s case under unsolved cases. Of course information may turn up in the future, but as it stands now we just cannot continue devoting resources to it. She had gone about the weeks after that like a ghost, like she was the missing and presumed dead one, distracted, unable to find joy in anything.  Maybe she could contact the mother… but what would she say?

She must have fallen asleep, for when she opened her eyes again there was daylight outside her window, and the sound of traffic, of car horns being honked and impatient drivers on their way to work. She would get up, and take a shower, and drink coffee and watch the news. There would be her driver, at 9, then the office 30 minutes later, where her secretary would be waiting, with the day’s gossip and the day’s list of tasks to be carried out, all mixed and intertwined and given out to her at regular doses as the day progressed. At some point, the girl would come up, taking its place at the top of the list like just another news item, like who won the election or they got divorced in the end or you have to sign this bond release form. “Such a sad case”, the secretary would say, and then – seeing the look on her face – “Madam what’s wrong? You must take a break Madam – the work is getting to you, you look so pale all of a sudden. You must take a leave”, misunderstanding, new to the job and not knowing of “Madam’s lost child”.

This was what she had waiting for her at the Office, and suddenly she felt very tired, as if she had not slept at all that night. She picked up the phone next to her bed and dialed the office number.

“Hello”, she said, “Good morning… Yes… Could you tell Jim not to come pick me up today? I’m feeling a bit sick…no just a little headache…I’ll be fine”

And hanging up, she turned away from the phone, from work and gossipy secretaries, pulling up the bed sheets and wrapping them tighter around herself. She closed her eyes, and tried not to think of little girls.

Amran Gaye is a Gambian. He writes short stories in his free time.

For the Love of M: A Short Story by Flourishing Florida

Born To Run: A Short Story by Wumi Raji

Pius Adesanmi
We use cookies to ensure that we give you the best experience on our website. If you continue to use this site we will assume that you are okay with it.Ok