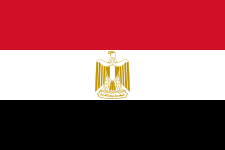 If the streets resemble the morals of people and the deepest attitudes of their unconsciousness, then the courts do resemble the power that tames the streets along with the morals of people. The power of the court directly affects the unconsciousness, while the law only shapes the path one walks through. The willpower decides the direction. Sometimes willpower becomes equivalent to destiny, and sometimes they are both foes to one another. We know much about such matters, whether through written knowledge, lively experiences, or perhaps by the seed of nature that is planted inside each one of us. We, in our historical books have witnessed a fine variety of examples, but in the contemporary world, if we are lucky enough, we have a hand in writing, not the books, but history itself. A mystifying example of such a battle between willpower and destiny is on the land of Egypt that was always known by its “Peace”, where every Egyptian now is involved in such a battle, whether inside or outside a cage, whether under the authority of the court’s supremacy or under the ability of the street’s manpower.

Egypt’s greatness is not glowing now because of those who call for justice, equality, freedom and democracy. The greatness is in the battle that each is going through, from the poorest citizen to the richest president. Mubarak fighting his fate from behind the prison bars, as a proud lion that is refusing to be tamed, even if mistaken, he is still refusing to be treated as a pet as he believes that wildness and pride are the same, sharing one notion, of which an alpha lion can never live without. One having this extra ordinary power and pride to stand against everyone and refuses to yield to the facts around is either someone who is sure of his rightfulness or someone who is glowing with ego. This reminded me of Moses when he split the Red Sea in half, and the Pharaoh insisted on chasing him, until the sea swallowed all the tyrants and invested the souls of the Prophet and his followers in Earth. Whichever case it is, our ex-Pharaoh is still fighting, denying all the crimes the whole world is accusing him with. He is fighting his destiny, same as all the poor revolutionaries who are still standing and fighting their own against a hopeless system that never seems to fall, as if this fathomless system is one of the three Pyramids of Giza! Equality is now implemented in a very distinctive way; the poorest and the richest people, both have the courage to speak, there is no one dominant over the other. This is why Egypt is in beautiful flames; on one side there are ones who are fighting their fate, while on the other side there are others doing the same, and the fate of each party is contradicting to the other. It ends up that both sides are fighting the willpower of one another, as if the variable of fate does not exist at all, whilst this is not true, fate might be the wall separating between both, it might be keeping them apart to save them from one another, and the battle is between all the contradicting willpowers against the silent essence of the wall of destiny. In the end any two opposing parties can be both building this wall whether between or around them. Humanity is grappling over the ownership of fate, or perhaps the known is grappling with the unknown, over humanity.

Mubarak’s trial has been a challenge, a mystery and a battlefield for many, including us. It has been a great show too, but this time it is a show that reeks from its originality. Many anticipations has been made upon this trial before its day to speak came, all created much bemusement for the minds, many puzzles has been questioned when the trial actually started, however the analysis made upon such issues always manage to score the most.

Perhaps for many Egyptians and non-Egyptians this court was never expected. However, it has been expected by sheer chance or intelligence by one of the classical Egyptian writers and the Nobel Prize winner, Naguib Mahfouz, in his book: Before the Throne. In this book he discussed the history of Egypt with all its former rulers from the age King Mena and the ancient chronicles of humanity to the time of Anwar El-Sadat and struggle of world peace, all in the Pharaonic trial of the afterlife, with the Egyptian gods judging each king and queen. The original Arabic version of this book was published in 1983 and Housni Mubarak the only one who was not mentioned in the book, as if the writer anticipated this trial and wrote the whole book as sign of warning, threat, or guidance. Or perhaps this book was written missing one chapter and Destiny wrote it on the pages of life, as if both the writer and destiny held the same feather, and shared the same handwriting!

The disorder in the court from many of the lawyers is a very strenuous proof of the disturbed manners in the streets, since the court is a very reliable reflection of order and justice. So after all the world became an eyewitness to such a court, would there be any hope for Egypt? In the global court of Earth, will Egypt end up guilty or innocent from the crimes she is accused with? Although things might seem puzzling, yet the good news is that Egyptians knew that the whole world would be watching the trial, and they could have acted otherwise in front of the crowds. Egyptians are not actors, they are not deceivers, they do not care if they look unorganized, however they are willing to make mistakes and learn it their own way. The members of the court were created within the rules of the system, especially in their profession. They were the ones behind the curtains, thus finding a way out of these rules is more like a maze. Egyptians are proud and bold enough to share this experience with others, they are not ashamed to expose their scars, and become a lively workshop with an international audience on the stage of Time.

Mahmoud Mansi studied Finance in The Arab Academy for Science, Technology and Maritime Transport. He discovered his writing talent when he turned sixteen, right after the sudden death of his father, but all his works were kept in darkness until he published his first novel: A Journey from Darkness to Light in 2010. He was the only Egyptian to win “A Sea of Words” literary award for 2010 for his short story; The Island. Also a playwright, poet, critic and photographer, he writes in Arabic but mainly in English to communicate with a wider range of minds and to reflect the native Arab philosophy and literature to the other side of the world.

His passion is in reviving the old native art that was used in ancient churches, mosques and the same used in building the pyramids of Giza. He is currently working in the same university he graduated from as a Human Resources Specialist, holding a MA degree specialized in Marketing and working on several new writing projects. “I do not write to confront another being, but I write to confront Literature itself, to confront Art... This is how we Humans excel.” - Mahmoud Mansi

I Woke Up In Iran: A Short Story by Jeffrey Jaiyeola

The Dance of the Mountain God: A Poem by Danny Bagucci

Digging up the Dreams: Poems by Adeola Ikuomola

The Printed Word Beyond the Spoken Story: A Review of ‘Blood Will Call’