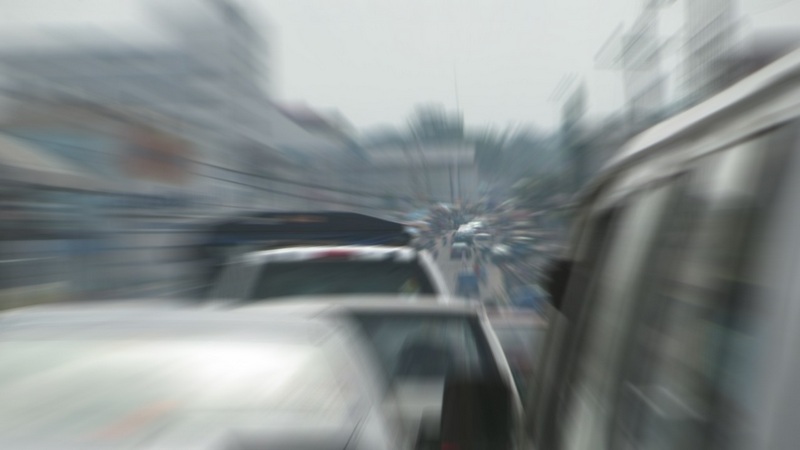 Osakpolor thought he could make it. An hour before quitting time, he was already taking his things and packing up for the day. Everything was done. All his files were organised. Then his boss, Vanessa, strutted in, swinging her hips and carrying a tower of paperwork. He tried to dodge, but her hips rocked from side to side with such force that he couldn’t escape. She had him cornered.

“You can sort this out, right?” It wasn’t a question, even by the way she had plopped it on his desk.

“Thanks so much.” She shot him a vicious stare that made him stop talking. With a satisfied look on her face, she sauntered back into her office.

He sighed and went back to his seat, rubbing his temples. To top off the bottle of unfortunate situations, heavy rain came down, seemingly out of nowhere. He bit his lip as he looked through the window near his cubicle. He would be in traffic. In the night. Going through his terrible, pothole-filled, street. After a rain. Great. His enemies of progress would surely be celebrating the turn of events.

He took a look at the first file, so complicated and stressful, and settled down in his seat.

The sun was receding from view and had painted the sky in a million shades of orange when Osakpolor finished the work. He grumbled and whistled at the same time, as he trekked to his car. He hated the fact that the parking zone was so far from the workplace—just another thing to add to his colourful list of menial things that more than slightly irritated him, like people who ate  strong-smelling foods to the office.

He fastened his seatbelt and made his way out. He thought that he would at least drive around for a bit, but he encountered the traffic head on, a long line of cars with no seeming point of end, and police officers trying to de-congest the area. Osakpolor groaned, tapping his fingers on the steering wheel. The place was flooded with muddy water, so it would take twice as long to get back home, and he was desperate for a smoke.

The hawkers were the real people that owned the streets. They danced past cars, collecting money from each one. In fifteen minutes, he had seen someone carrying a chicken, selling books, sunglasses, or even small portable radios. He was about to succumb and buy some groundnuts and zobo to chew and drink, when his mind stopped him.

When there is rice at home, you want to waste money? Don’t be unfortunate.

It was a good enough point, but after a few more minutes and the growls of his stomach grew persistent, he gave in, buying food from the hawkers. It was inevitable in the end.

A car behind him moved a bit, almost bumping into his car. Osakpolor gave the man a dirty look out of the corners of his eyes. He leaned back in his seat, letting his body fall slack. He felt drowsy, and his eyes rolled to the back of his head. He felt the warm froth of saliva dripping down from his fat lips.

The lights went out.

He woke up, a bit restlessly, still in his car seat. The traffic hadn’t gotten better or worse. Osakpolor cursed, slamming his fists on the hood of the car. From his car window, he could see the purple colours of the sky shining through the clouds. That was strange. It was supposed to be dark. He felt like he had been sleeping forever.

A vendor walked past him again, jiggling her fat thighs as she skipped. It seemed normal, till he paused and looked again, examining the thick pink flesh and seamless body, like a fat blob. That thing wasn’t human. His heart rose to the size of a balloon, with each beat threatening to make him explode. He pressed the child lock button in his car seat and looked around again, taking in the environment. He couldn’t spot one human from his car window. They were all beasts of different sizes and shapes moving around like everything was normal. His jaw went slack and he struggled to find words. He knew it was rude to point, but there were so many creatures around, he couldn’t help but point each one out. His brain went into overdrive, trying to process all the information. Where was he exactly?

Osakpolor stopped to think, tracing his steps back to the events of the day. Last he remembered, he was in traffic when he blacked out. Of course! He was in a dream. He nervously chuckled to himself, gathering up his skin, before twisting and pinching it. It hurt, but he hadn’t woken up yet. He shrugged, letting out a deep sigh. Guess dreams took care of themselves.

He looked through the window again and saw another alien dragging humans with chain around their necks, like they were some kind of dogs. It was a dream, but panic drove its way into his skull. Why was he dreaming about something like this? What could have caused him to have such a nightmare?

The creature that was dragging the humans spun its head around and stared face to face with Osakpolor. What the hell? He wasn’t sure, but it looked like the thing was smiling. Osakpolor, uncomfortable, looked away from the thing, avoiding its gaze. He took deep breaths.

He barely had time to react when he saw the rock.

He screamed as it hurtled through his window, bracing for impact. Glass shattered, and he felt them pierce his skin, little stabs all over his body. He couldn’t stop yelling, but his voice faded to the background. He couldn’t breathe. He grabbed his chest and felt pain striking up his palm. Osakpolor opened his eyes and saw blood—his blood—everywhere. He shook, trying to pull out a shard that pierced his hand.

The animal came closer to him, still dragging the humans in shackles by his side. Osakpolor’s eyes widened, and he tried to unfasten his seatbelt. He could hear his ears ringing and it distracted him. What kind of dream was this?

A woman in chains looked at him. Her skin was a bag of bones that stretched to its breaking point, with whip scars lining her body. She croaked, her voice weak but sharp.

The animal turned to look at the woman and flicked his finger at her. The woman’s body contorted and bits of her skin flayed, revealing the pink layer of fatty muscle underneath. It looked like she was being electrocuted, but how could an animal shock someone with just a flick of his hand? The woman’s screams were faint but haunting.

Bile rose up in his throat, and he vomited, the pale-orange fluid mixing with his blood. His clothes were stained, and he was sure he had pissed on himself. Osakpolor managed to unhook the seatbelt, and threw himself out the front window. His legs felt like they were struggling with the weight of carrying him. His limp made him unsure that he was running. He pinched himself again. Nothing. But this couldn’t be real. He couldn’t actually be in danger. The pain came back as a nice reminder. Not even in his nightmares had he felt such agony. It was real.

He kept moving, even faster now that he was sure he wasn’t dreaming. His brain kept spinning, filled to the brim with questions that needed quick answers. Why was he here? What had brought him here? How would he get back to normal?

The woman’s words came into mind. Change. The. Channel. Was there some kind of remote he needed to click for him to get back home?

Osakpolor longed for the bag of weed at home, a particular strain that would reduce his anxiety. It made him stressed even more, and his fingers itched. But the beast came closer, almost reaching him. He tried to move faster, but his limp wouldn’t allow him. He had to change the channel. What had happened to him that led him here?

An idea sprang to his mind, and he leaned back, closing his eyes, letting his body fall slack, and his eyes rolled to the back of his head.

He blacked out again, but recovered a few minutes later, seeing the trace of blood leaking from his nostrils. He looked around. He was in traffic like before. He came out of his car, which looked good-as-new, even after the alien attack he had gone through. Osakpolor almost tripped when he saw the clouds under his feet, so light that he felt he might fall any minute.

Someone—it was a human being this time, thank goodness—looked at him. The man was some kind of air conductor.

“Brother! Keep it moving unless you want kimbasas to come and devour you.”

“What’s that one?” He asked. The man ignored him.

Osakpolor rubbed his palms together. He knew what to do. Leaning, falling slack, eyeballs rolling back, he changed the channel. Darkness came as a relief.

His eyes flashed open, and he bent over, feeling like someone had punched him in the gut. The blood from his nose came down faster this time. He needed to stop. Hopefully this place was earth.

He found out his answer when he saw a one-legged creature—kind of looked like a mushroom, to be honest—pass by. The mushroom-like creature opened the car door and dragged his hair, trying to chew it. Osakpolor was confused at first; he was so sure he had locked the doors. The one-legged critter wrapped himself around Osakpolor’s body like some kind of parasite and started digging a hole in his skin. He reached for an old newspaper near him, and used it to hit the thing. The stupid mushroom wasn’t even bothered. The thing continued to slice into Osakpolor’s skin, burrowing his way through. He winced in pain as the beast dug its fingernails into his scalp. Rage filled him and his breathing became fast and hot. Steam poured out of every opening in his body and his fingers curled up into massive fists. Enough.

He wrestled the thing, slamming its body on the car door. The mushroom brute bit his lip, brutally splitting it to two. Osakpolor cried out, pummeling its fat head and snapping its neck. He opened his car door and threw the critter to the ground. He changed the program again.

The next place he went to wasn’t earth, and he wasn’t really interested in exploring the locale. Next.

His eyes stung and nose bled worse each time. He ignored the pain. Looking around, it still wasn’t earth! Damn.

He did it again, the next time holding his head, doing his best to stop himself from falling unconscious on the ground. He studied the place, and cursed. He fell slack and moved once more.

He hit his head on the steering wheel of his car, and his nose bled profusely. His head was spinning and he felt weak in the knees. His eyes were red and puffy, and his stomach shot jabs up his body. He tilted his nose upwards and stared at the view. The line of cars and Danfo drivers made him smile and thank God.

Finally back home, but the traffic had only moved an inch.

Osahon Ize-Iyamu is a 14 year old writer of speculative and literary fiction. He is currently working on his first novel.

Fear is that thing with no Name: Poems by Amina Dauda Oseme

Emmanuel Idem: This is What you Could be