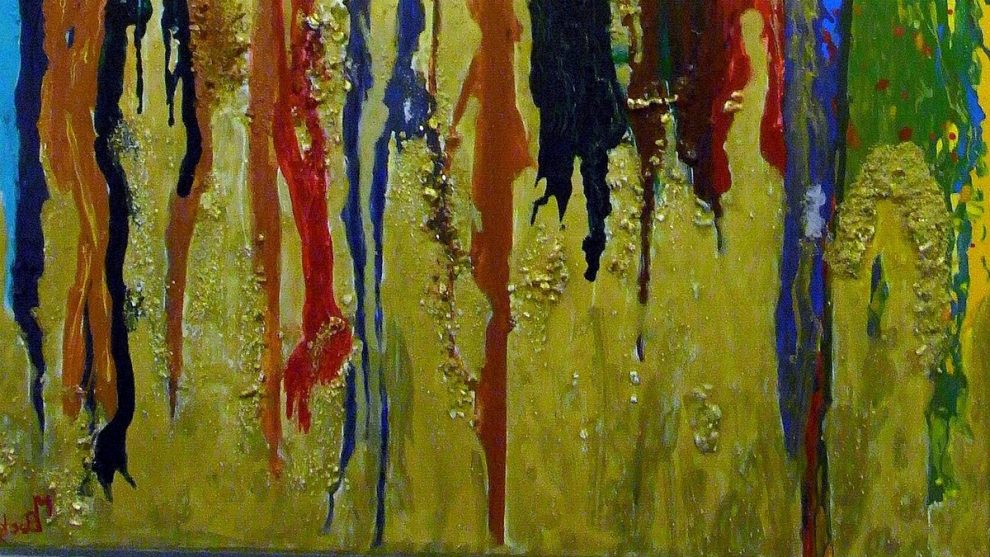 Osman rushed out of the studio to follow the doctor.

He returned after about ten minutes and stood in the doorway looking at Taher with his gritty big eyes.

Taher didn’t say anything and continued eating his mandarin, putting one segment at a time in his mouth. He was sitting calmly at the back on the sole wooden chair in the studio since he arrived early in the morning.

A few moments later Osman entered and squatted near him to turn on the radio cassette on the floor.

But suddenly Hsissen Saadi’s voice burst out loudly from it, causing Osman to fall on his back like a helpless land-dwelling tortoise and Taher to laugh at the sight. The older man collected himself quickly and started dancing.

“Your radio cassette is odd; it only works when it wants to. Well, at least it does!” he said loudly so the younger man could hear him through the joyful chaâbi love song that was playing on.

“It was my father’s,” Taher responded, likewise in a loud voice before adding with a stutter, “I mean it, it is my father’s.”

The doctor showed up as expected at the doorstep. And Taher hurried and stopped the radio cassette at once.

“I think I am going to take it. No I am sure. Can you wrap it up in paper for me?” the doctor requested, while he advanced to Osman.

The two other men secretly and briefly looked at each other—in triumph. It was a long battle that took all the morning to be won. Taher put his half eaten mandarin on the chair and proceeded to wrap up the painting the doctor chose to buy in a light brown paper wrap.  It was an acrylic painting depicting a group of three Kel Ajjer Tuareg men drinking tea around a fire outside their tent. Osman painted it after a short trip to Djanet. It was the same year Zidane visited the oasis city so the veteran painter never ceased boasting about it.

Taher handed the doctor—who had already payed Osman—his meticulously wrapped up painting and wished him salamah on the road.

“This will pay for my water bill …” Osman said, without looking at Taher while carefully tucking the money inside his paint-stained blouse pocket.

Then he lifted both his heavy arms and posed each one on the young man’s shoulders, dragging him closer until their heads were only a few centimeters from each other.

“I tell you what! You have to fight, fight for it, otherwise you will sleep with an empty belly. Each sale is hard, you have seen and keep on seeing with your own eyes,” he said, speaking noisily but pronouncing each word in a thorough way as if Taher had lost his hearing ability all of a sudden. Then he continued, “Your mother and sister won’t be there to forever help you, to feed you. You know you will not make it, you don’t have strong nerves like me to fight for a deal as a mad dog. So find another job, or stay here, just stay with me. You can paint amazingly but you can never be an artist. Not in this damn country.”

The young man felt very disgusted, not knowing if it was because of Osman’s breath which smelled like one of the sewages that leaked each time there was some rain in the city, or if it was because of his blunt words. So he freed himself from him in repulsion, stepped away and sat back on the chair to finish his mildly sweet fruit—they both remained silent for long minutes.

Taher started scanning the paintings they hung on the left wall of the very old studio for exhibition. Then his small dark eyes shifted to the right side of the place—to Osman who was organizing their tools on a horizontally-long, wooden table. He thought tenderly about the studio he was about to bid goodbye to. The antique room, and its dusty cement floor, creaking blue turquoise iron door, and circular high dome roof were home to his paintings, desires, disappointments and dreams for so long. He also thought about the man who once told him he will do great things. The same man who now broke the silence by asking,

“How is your mother doing?”

“She is fine,” Taher answered, smiling at the mention of his mother.

“I heard she is doing well with her small business. I feel like people will always rush to buy makroud, griouech and mchewek” Osman remarked, “Aghhh, I should have learned how to bake instead of how to paint. That’s what people actually buy,” he added with a tone of sarcasm.

“Yes, but it’s not that easy. There’re lots of bills to pay,” Taher replied.

“And how is your father?” the painter asked, avoiding the young man’s eyes by staring at the floor.

“He is well. I don’t know —how should I know?” Taher answered, slightly annoyed, when a young man—who seemed to be in middle school from his blue blouse—barged into the studio without warning, looking all euphoric.

“You will not come? We are heading towards the main street to protest,” he exclaimed loudly with his unripe voice.

The two men frowned and yelled a firm no at him, so he left as he came in—barging outside—all the while making a dismissive gesture with his right arm. Taher stood up immediately, walked towards the door and closed it in exasperation. He then stepped in front of the small mirror hanging on the right wall near the door to adjust his New York Mets cap. He dragged its tip onto his face to cover it well enough. Osman watched him secretly, he always felt sorry whenever he observed his attempts to hide the burn scars on his face. But he never talked about them with the young man, and even if he tried he believed, his guilt would burst out from the deeps of his guts.

It was a cold September afternoon.

Taher’s little sister was crying her fever out, his mother was agitated—she didn’t know what to do—no one of their now old neighbors wanted to help her, and no one wanted to open the door to a tainted woman. The cries of his little sister started to wake up the monster in his father, but no one noticed—Taher was only eleven and his mother was too occupied. She never thought she would do that but desperate and exhausted, she left him alone with his father, and took his sister Lila to hospital. As soon as the door closed behind them, Taher rushed to play with his small police car in the apartment’s hallway, imitating the sound of a siren, while his father, started pacing the living room in distress—his hands were shaking—and sweat dropped from his forehead in abundance.

“I… I, you… your face,” he said hysterically to the boy as he stepped into the hallway, grabbed him violently by his left arm, and took him to the kitchen. There he lit the small gas stove on top of a steel table, and put a small pan full of overused oil to heat it up. Taher stared at him questioningly without a sound.

Few minutes later his tormented scream made the whole residential building tremble. Some young men standing just outside the building rushed in to find him passed out—his face damp with oil—and his father sitting calmly in a corner.

Taher finished adjusting his cap, and before he turned his head, Osman looked away from him.

“Your meeting is soon.”

The young man nodded to confirm. His heart drowned with sorrow, he will soon be leaving the man who sheltered him after his recovery, and who helped his family move to another wilaya.

“You look good in that blue jacket just like your father, you know? He was so good, he still is actually, your mother was lucky,” Osman said.

“She is,” replied Taher, with pride, “he is also lucky, my mother is beautiful, Lila is also beautiful just like her, I have seen photos of her when she was younger, they are like twins,” he added, with joy.

“Yes, your sister and mother do look a lot like each other, you know. I am glad she graduated—she can work somewhere good with her business diploma”

Taher perceived the painter’s reproachful tone but he had already made up his mind. He wanted to be a painter too, and decided to go away to Algiers—where more people were interested in art—and work his way up there.

“I have to go now. Mohammed must be waiting for me to travel”

“Trig elslama,” responded Osman in a detached voice hiding heartache as Taher stormed out of the studio.

They already bid each other goodbye the night before. To do it again was too painful a task.

Osman took the photo he hid for 29 years and kissed it.

He never carried it with him—he left it at his tiny apartment where he never let in any visitors. He kissed it again.

Taher’s mother was his only love. Her family didn’t want him—a poor painter—they married her to another man who was well-off and a respected teacher.

He dragged his tired feet and sat on the chair in the candle-lighted studio alone. The past haunted him and guilt burdened his days and nights, but his heart was still full of love for her. He never imagined that one day he would be caught in full embrace with her by her husband—by Taher’s and Lila’s father— but it did happen.

Image by Gudrun Becker from Pixabay

Saliha Haddad is an Algerian part-time teacher of English at university. She graduated in the field Anglophone literature and civilization in 2015. She is an interviewer of fiction writers for the online magazine Africa in Dialogue. She has written about cultural subjects for the Algerian online platform Dzair World and for the magazine Ineffable Art and Culture. Her debut creative nonfiction piece has appeared in the African magazine Agbowo.

My Love Doesn’t Mean What You Think It Does: Poems by Naipanoi Lepapa

Olabimpe Adedamola: All the times I wished I was a sponge