Toni Kan’s quill glints like an emerald whenever he puts pen to paper. In the Lagos axis of Nigerian writers, he ranks alongside Odia Ofeimun, Akachi Ezeigbo, Nduka Otiono, Promise Okekwe, Adewale Maja-Pearce, Maxim Uzoatu, Folu Agoi, Uchechukwu Nwosu and Hyacinth Obunseh as some of those who bring special fervour to the literary scene. This is no surprise, because when he made his debut, When a Dream Lingers Too Long, a collection of poems, in 2002, plaudits reverberated and lingered.

Helon Habila, the Caine Prize for African Writing winner, said of the debut: “Tony’s poetry has clarity, coherence and unity. He has depth as well as range. His imagery is so vivid one could touch it, his lyricism so clear one could dance to it. Likewise, Maik Nwosu, the multi award-winning writer, hailed his poetry as ultimately evoking “images of triumph of the spirit –beyond the enlarging shadows of despair – as it centres on artistic vision rooted in transformative reality.”

A year later, as if to confirm those accolades, Kan entered the book for the ANA/Cadbury Poetry Prize and came second behind the US-based poet, Ogaga Ifowodo. It was not a bad finish for a writer with a first collection of poems. A versatile writer, he published his first novel, Ballad of Rage, in 2004, and entered it for the mouthwatering NLNG Prize for Literature. Interestingly, the Delta-born writer, whose full name is Anthony Kanayo, made the longlist of eleven. 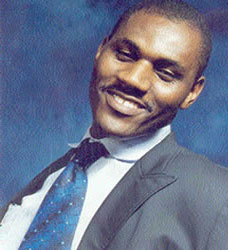 Kan’s writing has taken him outside the country on many occasions. As an undergraduate at the University of Jos in 1992, he came second in a British Council essay competition, which earned him a month’s stay at the University of Edinburg, Scotland. But life is a case of win some, lose some. Kan was to prove that when he came first in the Swiss Radio International essay competition (English language category) some years later. He has also won the Liberty Short Story Competition and a poetry prize at the 2001 Muson Poetry Festival.

Silence drifts across the air as the lift at the corporate headquarters of Zenith Bank, Victoria Island, Lagos, winds its way to the peak, with an effortless levitation. At 6 p.m., you would expect a yawning office, but a banker’s schedule gives little room for a dull moment – not the kind of fruitless, endless toil you get in Kofi Awoonor’s “Elevanyo Concerto”. The steady taps on computer keyboards blend into lyrical tremolos from across the broad, partitioned offices. There is nothing to suggest any semiserious concentration. Everybody is as busy as a bee. In such a moment, even an ordinary greeting sounds like a distracting yodel. “A banker’s life is work, work and work,” says Kan a little later at the conference hall adjacent the office, his eyes glazed with some kind of listlessness.

His words drop like the clappers as he speaks on the 2004 NLNG the Nigeria prize for Literature: “It was a great feeling. On that long list, we had Professor Akachi Ezeigbo, who was my lecturer in my MA class. It was a good thing to make your lecturer proud and be counted among the best after a first novel. It was a validation of my effort.”

Helon Habila had written on the blurb of When a Dream Lingers Too Long that Kan’s poetry is different from the rest, because there is no “modish militantism” or “poems written to set design”. A casual deduction might link this to the art for art’s sake poetics, but Kan’s explanation is far from that:” For me, if a political theme suggests itself, I’ll write it, but I don’t write poetry on the basis of any ideology. I write based on what comes to me from my environment.”

In his novel, Ballad of Rage, a love-starved wife is driven from pillar to post to find romantic fulfilment she cannot get from her doctor husband. A taxi driver cashes in on that, a misstep that leads all into a boiling cauldron of tragedy. “This book came out from a story I wrote, which I sent to a writer’s workshop,” the heartiness of his voice comes alive, recommending rapt attention, “and everybody kept asking me ‘What happens next?’ It was then I realized there was more to this story that I haven’t told.” With the fellowship he got in 2003 from Heinrich B?ll Foundation to travel to Germany, he decided to flesh out the short story as a novel. To what extent is the story a reflection of society? He beams a wan smile and snuggles closer to the table. “The rape scene in the book actually happened when I was in school,” he quips. “The missing mother happened to be my friend. I was trying to recreate things that happened around me.”

A revisit of Charles Nnolim’s controversial essay, “New Nigerian Writing: Between Kitchen and Debauchery,” is pertinent, because Kan is among the category of writers he describes as “the fleshy school of writers” whose “main characters are in dire pursuit of the flesh, writers for whom the excitements and satisfactions of the body are far more important than the sanctity of the novel; for whom the pleasure of the flesh are of more moment than the essence of the spirit….” At the mention of that essay, a bubble of laughter pulses through his body.

Yes, Kan has a case to make for his colleagues: “In my essay, “Love and Lust in Contemporary Fiction”, published by Farafina magazine, I tried to show the point at which I agree with Nnolim and the point I disagree also with him. I tried to make a case that, if you look at contemporary Nigerian fiction – using Maik Nwosu’s Alpha Song and Invisible Chapters, Helon Habila’s prison stories in Waiting for an Angel, Nengi Ilagha’s Condolences, Akin Adesokan’s Ode to the Tribe, my own Ballad of Rage, and a few others – which were set against a backdrop of our recent history, that is, the military dictatorship of Babangida and Abacha up to the beginning of this democracy, you had people who were under siege. And I felt that that siege mentality wasn’t supportive of relationships. So, we couldn’t incubate emotions into love.

“If you look at these novels I mentioned, nobody gets married. In Ngozi Chimmanda’s book, Purple Hibiscus, the parents are married, but a very unhappy marriage. There is no love between Eugene Okafor and his wife. The daughter, Kambili, falls in love with a priest, but the man soon travels to Germany. In Sefi Atta’s Everything Good Will Come, she gets married, but later divorces her husband. In Maik Nwosu’s book, Invisible Chapters, nobody has a wife. In Akin Adesokan’s Ode to the Tribe, nobody is married. I felt that what we were describing in these books were informed by the period we passed through,” he says coolly. “It affected us (writers) emotionally. It’s not as if we ‘ve become more corrupt.”

The writer sees the Nigerian critic’s uncharitable dismissal of new writings as using a sledgehammer to crack a nut. So, when he says “it’s difficult to see people who came before us, who wrote what Maik Nwosu is writing now,” he may not be merely spinning words into a pun. “I just finished reading some books – I don’t want to mention the titles – of writers from the old era, and I said to myself ‘What were these people writing?’ I think those of us who are writing now, who know what they are doing, are producing good works,” he affirms.

Continuing, he says: “Maik Nwosu’s books are excellent, but he hasn’t had the kind of reputation he should have for his books because of where he published them [Nigeria]. I don’t see anybody writing before him who had the kind of rigour and intellectual strength he brings to his works. So, I don’t think that is a good impression of what we ‘re doing. Look at others – Ngozi Chimamanda, Seffi Atta, Helon Habila, Chris Abani, Pius Adesanmi, Ogaga Ifowodo, Ike Oguine, etc – they are producing good works. The problem is that we haven’t got the kind of time to commit to writing full time.”

Many people have wondered why Nigerian writers living abroad are getting more international acclaim. The reason, partly, according to Kan, is that those writers are pandering to the taste of Western publishers, who have a particular perception what an African story should be, which the local writers are not tailoring their works to. “If you write a book about Africa that is wholesome and positive, it won’t sell in the West. But throw in the exotic, the fetish, the violent and the dictatorship, and you’ll have a big hit in the West,” he says with a disguised rueful tone.

Kan also believes that Nigerians don’t celebrate their writers unless they get a validation from outside the country. For instance: “When Helon Habila was in Nigeria, nobody knew who he was. He entered a competition [in Nigeria], came first, and the judges didn’t give him the prize, because they said they didn’t know him. But immediately he won the Caine Prize, he became the toast of Nigeria. It’s not as if we don’t have good writers here, but unless you get that validation from the West, nobody is going to see you as important.”

Can he take up the challenge by Professor Nnolim for Nigerian writers to write utopian literature? His response is a clinching straight talking with a count-me-out finality: “I’m not going to write utopian literature, because I don’t write science fiction. I write fiction that reflects the reality of my own existence. I can’t write escapist literature. I think it’s left for the writer to listen to the inner voice to give him a story, and then he writes it out. It’s not for Professor Nnolim to prescribe to us.”

The American novelist, Nathaniel Hawthorne, has said that “A hero cannot be a hero unless in a heroic world”. If we consider this, then Kan may have a point when he critiques Nigerian critics: “There’s nobody that is looking at what we’re doing in a holistic term. They’re just picking at things. When the critics actually understand what is going on, it might be too late. I think there is a fantastic renaissance going on, especially in fiction. With the prizes coming in and names going out, very soon, once you say you’re a Nigerian writer, it’d be a passport for greater things.” The future is not far away.