Odili Ujubuonu, winner of this year’s ANA/JACARANDA Prize for Prose spoke with SYLVESTER ASOYA on the making of Pregnancy of the Gods, his winning entry.

Q: Pregnancy of the gods, your first novel, just won this year’s ANA prize for prose, what exactly inspired this work?
A: I will say in a nutshell that the book is a product of a man who refused to do nothing when he had nothing to do. I started the book in 1993, about a week after Chief M.K.O. Abiola’s election was annulled by the military. During that time, when I get to the office, there will be nothing to do and I sat down doing nothing. I knew I would breakdown one day because I was getting frustrated, so out of frustration I decided to do something. How can a young man go to the office and practically loaf around, doing nothing? So I picked up my pen and a pad and started scribbling and before I knew it, the story became bigger than myself. And I followed it to the end. One interesting thing about Pregnancy of the gods was that I cried with the characters and I laughed with them. But at a time, I realised that they were real human beings and I was living with them. It was a very good experience writing the book and that is why I hope to write more. 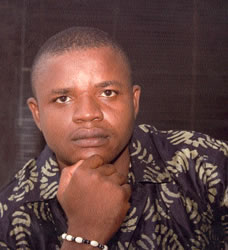 Q: When your name was mentioned as winner of this year’s ANA/JACARANDA Prize for prose in Yenagoa, how did you feel?
A: I must confess that it was a feeling of exhalation and bewilderment, because I wasn’t too sure it was for real. In fact, I wasn’t too sure I was actually in that hall, but I became conscious when I saw my friends and their reaction to the announcement. The excitement built over a long period of time as I waited for the announcement and I think that was why I did not faint. I almost fainted, but it was a good experience.

Q: Now that your first novel has won a major prize, what is your next move?
A: I have already started the next book. The next book is a continuation of the first story but not in the manner that everybody will be expecting. I don’t want to use the word sequel because ‘sequel’ means moving from line A to line B. It is a story that draws from the earlier one, but somebody could still read it independently without missing any bit of it. However, by the time you read both, you will easily make the connections. I started all the stories in 1993 and actually finished them in 2000. It is a trilogy. What I have done is that I spent the last three years working on Pregnancy of The gods to get it to the stand it is. Now, I am working on the next book which should be out by next year. I will start work on the third one so that my readers will not be kept waiting. So, I am in for it and I am going to go on.

Q: What are your impressions on African Literature? Is the story still being told?
A: Africans have to tell their story; nobody is going to tell your story for you. And there are so much to be told. As I said earlier, Chinua Achebe started this story telling well and the next thing is for our generation to continue. Wole Soyinka on the other hand got the Nobel Prize, so it is left for us to try and get this prize again. We know that Chimamanda Adichie is doing well as a writer. All I am saying is that Nigerian writers are doing well both at home and abroad. There are more prizes to be won and we are all getting ready to win them. What is important is that we must tell our stories. I love African stories because it has rhythm, and this is a major feature. The more African a story is, the more rhythmic it turns out. And it is usually a very good experience.

Q: What should be the duty of a writer in a developing country like ours?
A: A writer is like a camera or a screen. You must regularly go back to your past and replay the tapes so that people of the present will see what happened in the past. And you also take the current pictures the way they are so that people will see it with a hope that those in the future will have access to it. Then you can also predict the future in such a way that future generations can see the mind of today. That is the work of a writer, because he or she directs the people to success whether in terms of understanding who they are, knowing where they are coming from and where they are going. That is what writers should do; they must continually make people to ask questions. When you get to the end of a book, you must ask yourself certain questions. For instance, you know that Nelson Mandela once said that Things Fall Apart broke the walls of prison, and you know what that means. Mandela may have critically looked at the character of Okonkwo in Things Fall Apart. For all his power and achievement, everything he thought he was preserving were destroyed by his mere contact with the Whiteman. Mandela is living today because he probably learnt from the mistakes of Okonkwo. If he had resisted the Whiteman too violently, he may have died. This is the kind of thing literature can do.

Q: At what stage did you start writing seriously?
A: I remember I wrote my first lines when I was 15, then at Christ the King’s College, Onitsha. After that, I went to the University of Nigeria, Nsukka where I made friends in the Department of English Studies, though I read political science. At Nsukka, we were taught to read wide and I took advantage of that. We were taught to think outside the box and we came under the influence of great writers.

Q: Aside Achebe and Soyinka, are there other writers that influenced you?
A: I love the simplicity of T.M. Aluko, Flora Nwapa and to a large extent, I am a lover of poetry, even though I don’t write good poems. I love Gabriel Okara and Christopher Okigbo. I must confess that the size of Nigeria is a blessing to our literature. Chinua Achebe has influenced me to a great extent. I have heard people saying that I write like Achebe, but the point is that the setting of my story preceded the coming of the colonial masters. Achebe wrote his book during the colonial era, but I am a post-colonial writer and my book is a neo-colonial product. Pregnancy of the gods is written with the mindset of a man who has experienced what it means to rule ourselves. Now, we are suffering a different kind of colonialism, where African literature is celebrated from the outside rather than from inside. And our development is also engineered from outside either through IMF or World Bank. My book is a response to this ugly situation.

In the Belly of a ‘New’ Culture: Paradigmatic Foregrounding in Sola Osofisan’s ‘Sin-Eater’