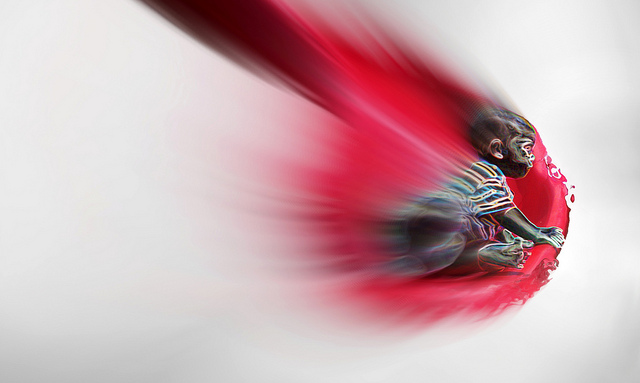 Inalegwu felt for the reassuring lump on his trousers made by condoms in his pocket. He prayed to be allowed not to use them tonight. If only Agnes would give him a child, he could divorce his wife Ada.

A car’s headlamp momentarily lit the muddy street. As far as Inalegwu’s eyes took him, the puddle was in control. But his scrutiny was pleasantly interrupted by a signpost: “Kusul Brothel.” Inalegwu leapt sideways when the car came splashing mud past him, its tyres making fizzing sound in the rain water that soaked the street. He noticed a podgy man in the driver’s seat digging for gold in his nostrils. Inalegwu didn’t linger on him for long; at least it was comforting that at last, Kusul was within his view. A few metres more and he would be in Agnes’ arms, his heart beating the way it hadn’t done for days now since he last came to Kusul.

A rush surged between his thighs. He extended his grip on the condoms to calm the rush caused by Agnes’ softness which he could feel already. Such succulence that Ada his wife no longer has. She would regret ever depriving him sex. If only Agnes would accede to his request tonight.

Inalegwu could not imagine Ada, his own wife, who was not only his wife but confidant, rejecting him because a stupid test scored him positive for HIV. That was a test! Nothing but a test! It could have been negative; it could have been positive, or inconclusive, depending on who conducted it. A test is what you make of it. Testing positive for HIV doesn’t mean one has AIDS. As far as Inalegwu was concerned HIV was an infection of the mind.

If not for the voluntary counselling and testing made compulsory for all staff by his firm’s management, would anyone have been able to look Inalegwu in the face and call him HIV-positive? What was Ada talking about? Yet, all saliva in my mouth dried up and my own Ada could not believe me, let alone allow me make love to her even when I begged to use a condom! What if I didn’t tell her?

He was surprised that an educated woman like Ada did not know the difference between HIV and AIDS. Anyway, now he had found Agnes. Let society call her anything—prostitute, ashawo, anything! He could give her all his salary in exchange for the name because she was sent from heaven. If only Agnes could grant him the request and make love to him tonight without the rubber in his pocket that would be the end for Ada and him. I swear!

Kusul was near yet far. Its signpost now stood like a hungry dwarf pointing at Agnes’ home on the other side of the street. The brown building was enveloped in a thick darkness like boiled yam dipped in the dregs of palm oil. Inalegwu salivated, unsure if it was in response to the thought of boiled yam with palm oil or to the victory on the other side of the road. Jealousy gripped him for a few seconds as a thought crisscrossed his mind: What if someone is inside with her?

No, that can’t happen! My Agnes! She won’t do that, he rebuked himself and instantly leant on the signpost to say a short prayer. He prayed that the Almighty should touch Agnes’ heart as He had been touching it for the past one month since this devilish spirit possessed Ada. The Almighty should go before him like a pillar of cloud and come behind him like a pillar of fire, as He did while leading the Israelites from Egypt, and make sure that no one was inside with Agnes. He prayed through the Lord Jesus Christ and he knew his prayer was answered for, before long, he was transported into the presence of a free Agnes. Free, in the sense that he didn’t wait for the chubby man that came out from Agnes’ door as soon as Inalegwu was approaching it.

“Agi, I want to beg of you,” Inalegwu began, promptly going on his knees as Agnes opened the door. “I want you to do something for me. You are the only one who can save my future generations from dying.”

The young lady was apparently puzzled; though Inalegwu on his knees didn’t see her long facial marks draw out. Mr. Inalegwu was one of her new customers whom she only chatted with for a few minutes after rendering her service if there were no clients waiting. She wondered what favours he could need from her now. Maybe to ask for better service. Or make some odd request such as that of a man that needed her to collect his spermatozoa for artificial insemination because he didn’t achieve erection with his spouse. But, as far as she knew, at least, going by the howls and screams when she serviced Mr. Inalegwu, Agnes wasn’t expecting that he could ask for anything more full of beans.

But she had to let him utter his request, so she asked, “Wetin come make your fushure generashons dey for danger?”

Grabbing her legs frantically the way he had seen them do in movies, he responded, “I need you. I have no generation left except the one you give me. My people say he who goes to his neighbour to ask for clothes must first cast a glance at his neighbour’s attire. You are every inch a fertile woman, made to fulfil the biblical injunction ‘Be fruitful and multiply.’ Ada came into my house two years ago and for these two years she is like a stone; she can’t give me a baby. She is barren. She is even frigid! I am ok, can’t you see me? All our doctors say so.”

Agnes looked the man from his oblong head to his civil servant’s footwear. His eyes looked dreamy like he was recovering from an orgasm.

“She is the fault,” Agnes heard him still pleading his case before her court. “Now, I have no children and I am the only son of my father. Our lineage is at risk. Agnes, I want us to make love today without condoms.”

Inalegwu was hushed by the suddenly apparent stupidity of his request and Agnes stunned by the incredulity of it. In the quiet, she pondered his mental state. Like most of the numerous men who thrust phalluses into the gully between her legs daily, Agnes never bothered about Inalegwu’s history. Of course, they came to her to solve their problems, but it wasn’t in her terms of reference to research into their problems, which were actually theirs, not hers. Her clinic solves her own problems by attempting to solve theirs. The world is suffering from lots of bad sex, Agnes always enthused when discussing with her fellow commercial sex workers. For that reason, there must be sustainability; no one should afford risking the chicken that lays the golden egg.

“You sabi wetin you de talk so?” Agnes demanded.

“Me, I no know love o,” Agnes responded, shoving him off lightly. “Love na lizard game; na you go fall, na you go nod your head say you do correct tin; na you go cry when e come dabaru.”

“I say you no sabi wetin you de talk. To give you service without rubber, we no de do am. E no dey our book.”

“Book! Forget the books. Who wrote the books? Are they not humans? After all, there is no one here with us. They can’t tell if we used condoms or not. At least, not this one time.”

“But dem go see when my belle start to swell up with pikin, abi? Or when I start to lean like thread because of dat disease. No be so?”

“Why I no go tink, you better pass people wey get am? Who know weda you get am?”

“God forbid! I reject it in Jesus’ name! Agnes, I love you o.” Inalegwu dipped his hand in his left pocket and brought out a wad of Naira notes. “I will give you all this. This is fifty thousand. If only you could give me a baby!”

Agnes paused. Her house rent flashed through her mind. Mr Soni, The Caretaker, got free sex two days ago because she didn’t have the seventy thousand Naira rent she paid per annum. Coming for weeks of free sex was his annual pattern under the pretext of diligently pursuing rent collection on behalf of the landlord, and he would take a whole day eating her food, snoring and having sex. This fifty thousand could save her all that embarrassing loss.

“You dey give me dat money?” Agnes asked, reaching out to touch the wad of money.

“Yes,” he responded. “That is my housing allowance which they pay us every year.”

She took the money and kissed him full in the mouth. “I dey come,” she said in the most sensual tone she could muster while drawing a finger down his chest.

Inalegwu watched her slide out of the room, his chest stuffed with rumpled excitement and anxiety.

An hour later, he was sprawled on her breasts snoring like The Caretaker, but unlike The Caretaker who always used the condom, Inalegwu didn’t. Agnes did, but she wouldn’t know how much protection she’d get in her first attempt at using a female condom. Hopefully, the fool snoring atop her now didn’t notice.

Odoh Diego Okenyodo is a Nigerian writer. He is one of the Directors of Splendors of Dawn Poetry Foundation. He co-edited Camouflage: Best of Contemporary Writing from Nigeria, an anthology. His collection, From A Poem to its Creator, was shortlisted for The Nigeria Prize for Literature in 2009.

Michael Inioluwa Oladele
We use cookies to ensure that we give you the best experience on our website. If you continue to use this site we will assume that you are okay with it.Ok