Unoma Azuah’s first novel, like most novels written by women in Africa, tells a story of a young woman suffocated by the inconsiderate wishes of the people (especially men) – and in this case it drifts to cultural exigency – around her and her determination to develop herself. Azuah’s novel awakens our memory of the kind of the feministic themes that substantiate the body of the female novel of the second generation of Nigerian writers. Her story moves in the sphere of culture conflict, which shows that African writers are not yet done with the phenomenon. 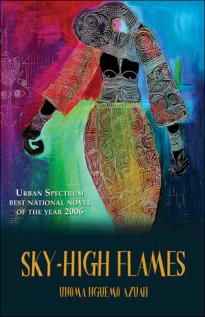 Ofunne, the major character, comes with energy and life. She is growing up in a culture that she likes. Like every adolescent, however, she is worried about her stay at home, being condemned to home chores. Her father, for example, though not as strict as Li’s father in Zaynab Alkali’s The Stillborn, has his attitudinal peculiarities that have pestered her life. The mother insists on what she feels is the correct thing for Ofunne. Her younger brother adds to her work in his own ways. Ofunne’s desire is to live out of this circle: “I wonder when our primary school standard result will be released. I want to leave this drudgery and get into school” (9).

She arrives the secondary school with high hopes. The determination is there; the focus is also there, but only at the beginning because towards the end of her schooling, when she meets Oko and becomes aware that she has been married out, she turns a disappointment even to her own ambition. The reader is surprised that Ofunne who appears strong-willed and assertive at the beginning of the story can so easily accept her fate as being married by proxy to a man she did not develop love for.  Her strong spirit may have been overcome by what she sees of the man: “He’s handsome tall, and dark. He has open teeth and with a sprinkle of grays in his hair, but I like his smile. He kept staring at me, too” (68). Her innocence and uncivilized behavior, her mark of bucolic upbringing, quickly transform as she gets refined in the school because of her amiable nature and intelligence. Sister Dolan, the principal, comes to like her. She is full of zest to acquire knowledge. And her focus has begunto deepen to a dream.

But an unfriendly circumstance awaits her:

The next week when Awele’s father visited, my fear was confirmed. My mother was sick, and my father intended to withdraw me from school to get married. It was my fourth year in school. There was just one year left to complete school. I couldn’t cry in the presence of Awele’s father. I just excused myself and tore into blind race to the convent and searched around for Sister Dolan, but she was nowhere to be found (69).

Ofunne’s initial reaction does not measure up to the expectation of the reader who expects a frontal opposition against whatever her parents have schemed to give her out for marriage. After crying, Ofunne resigns to her fate without a befitting protest to such a wedge on ambition. Not even her mother’s sickness could have held Ofunne from initial protest. She will not be heartless for refusing to sell herself in order that her mother is given proper medication. A way out is for Ofunne to step out of school temporarily to make money and help her mother. She should have risen strongly against this patriarchal oppression: “Don’t question my actions, Ofunne. What is wrong with finding a man for you? And what is wrong with getting married? Are you not of age? Or has school blinded your priorities?” (76) It is the patriarchal finality. Ofunne returns to school, after a brief visit, helpless. Sister comes to her aid by offering her a job that will keep her going in the school.

Oko, the husband, has taken responsibility as a husband. This hems Ofunne in. “I wrote him back, telling him to visit and that I was happy he was working hard for us.” (83). Ofunne begins to naturally desire him as a husband. She is now concerned about his moral rectitude as a husband.

Ultimately, Ofunne is denied the respect she deserves in her home:

It was the same day that I discovered that I was leaving for Kaduna with Oko. My parents had performed our traditional marriage by proxy and there was no need for me to return home. I refused to go with Oko without seeing my parents, but awele’s father begged me to go with my husband (88).

Ofunne is so orthodox that she does not find an excuse here to burst out in terrific protest. She follows her new husband to Kaduna, an action that is somewhat unbecoming of a girl that has had secondary school enlightenment.

Life in Kaduna almost sinks Ofunne into tragedy. Oko turns out not to be the man he had earlier presented himself to be. The other side of him being a good Christian and a gentleman, is a neat sham. Like Habu in The Stillborn, the city has eaten up his psyche and rectitude. Yet he tries to be a husband. He is clever about his obvious shortcomings, all in a bid to be a responsible husband to Ofunne whose eyes have widened, taking in the realities surrounding her matrimony.

The biggest problem of the young couple is that syphilis has nearly ravaged the reproductive organ of Oko. Ofunne cannot be pregnant. She  keeps wondering why she has not taken in and why Oko has given the serious problem a backhanded dismissal each time she wants to get him to worry about it. Matrimonial crises build up with considerable
control of intrigues and suspense from the author at this point. The discovery, from Oko’s diary, that Oko has an infection that has become chronic with him energizes her to seek light beyond his reluctance to see a doctor. Truth is that Oko is aware of his medical problem and will not reveal it to his wife. Ofunne is driven to frustration and confusion: “I
was confused. I wanted to tell somebody my plight, to let somebody hear my story and give me another option, but I erupted in tears” (117).

No, tears cannot solve her problem. She lands on the bewildering wisdom of a herbalist materialized in a smallish man called Kpako. He will “apply some ointment on the sore on [Ofunne] private part” (121). This is one out of the points of humor in Azuah’s fiction. Kpako gulps “two hundred naira, which was Oko’s salary for two months” (122).

Ofunne becomes pregnant, after all. The bliss terminates with a stillbirth, at Oko’s hometown, all as a result of the syphilis. Azuah succeeds in creating a phenomenal moron in Oko because despite the psychic wound he has inflicted on his wife, he still games about cleverly with his fatal infection, refusing to confess, refusing to wear his garb
of blame and shame. While family members are scandalized, Oko’s mother, some sort of a local Jezebel, blames Ofunne for causing the stillbirth, saying “She [Ofunne] must have been the one that got the disease. My son is not wayward” (160).

Naturally a traditionalist – an attitudinal build Azuah uses to stamp her cultural gospel – Ofunne returns to the roots: “I sat in front of the shrine and cried. I begged whatever powers that be to cure of me of the illness Oko gave me, to let me complete my education and become a teacher” (161). She is set to turn to self-development, which
she should have been engaged in like her friend, Awele. The questions with which we can arrest the author are where will the money for further studies come from? She is certainly back to the house that sells her out to acquire money to keep the family. Should another crucial family problem arise, will she agree again to be sold to solve the problem?

Azuah has an answer in this strong, pregnant statement from Ofunne to her mother: “No, no!…You and father have had a good  part of my life, whatever is now left of me is mine” (163). Ofunne should not have allowed her parents to have a part of her in the first place, if Azuah had created a stronger, more controversial, even iconoclastic
character in her. Such a character would fit more into Azuah’s feministic design.

Azuah’s treatment of the African culture is interesting because, like Chimamanda Adichie, she regards her culture as too good and instrumental to be totally jettisoned. It is to the same culture that flings Ofunne to Kaduna that she returns in order to pick another beginning. So, it is not the culture, but the greed of the people in the culture that brings infamy to the culture. Like most keen and sensitive female writers, Azuah uses the first person narrator to bring us close to the psychology of a young woman, in her prime, faced with the senseless adventure of the male monster, who is, in Ofunne’s case, the man she thinks is capable of making her a full mother, at least from his appearance.

Azuah’s first novel is a good and commendable attempt. Her language flows in a flexible, tinkling syntax, with some dose of Nigerianisms. We welcome Azuah to the fold of the third generation Nigerian novelists. For the maturity of her work, she deserves a place.

Behind the Masks of Goodwill: The Zomba Prison Project & the Grammys

The Whispering Trees: A Short Story by Abubakar Adam Ibrahim

The Reunion: A Creative Essay by Seotsa ‘Soh’ Manyeli