I Write Because I Care For People – Uzodinma Iweala

UZODINMA Iweala is the son of Ngozi Okonjo-Iweala, managing director of the World Bank for Africa, Middle East and Europe. She was also the country’s Finance and Foreign minister in the administration of Chief Olusegun Obasanjo.

It is difficult to hide under that imposing introduction, but Uzodinma is not one to be hooked on his mother’s achievements. He readily acknowledges her support and that of his father, saying, “like all parents, they want me to have some sort of security and I can appreciate that. But my parents are very interested in seeing us do well in whatever we choose… therefore they have given all the encouragement and support necessary.” 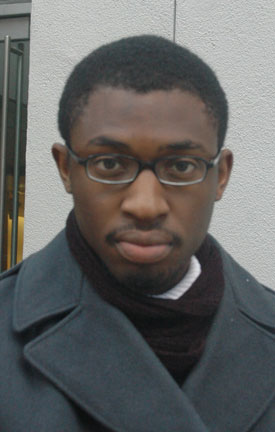 The writer, who grew up in Washington DC USA, says that his place of birth has not kept him from connecting with his roots. “Nigeria is home. I’ve grown up believing that… I have been lucky enough to spend so much time in Nigeria and well – it’s my country!”

IN 2005, Uzodinma published a novel, Beast of No Nation, the story of a child soldier. Written in ‘sub-standard’ English, it has generated countless debates on whether it is pidgin or some fanciful creation of the writer.

Uzodinma explains that his decision to write in that language is simply a way of expressing his character’s thought. For him, the character created the language. “It was the only way that Agu could speak. The only way that I could get him to tell his story.”

And while his characters have dictated his writing style, so has writers such as Ken Saro-Wiwa and Amos Tutuola, who have both written books in colloquial English. “And then, there’s Samuel Beckett, the Irish playwright and novelist who also plays around with structure and style of voice and language. But again, there were many writers and books that I read that contributed to me developing that style for my particular book.”

There are several writers whose works have in some way shaped his writing. “I’m obviously influenced in a major way by the African greats – Achebe, Soyinka, Okri, Ngugi, Gordimer, Coetzee but it definitely is not limited to these individuals at all.”

NOW that the excitement of publishing his first book Beast of No Nation which took him a year to write, has simmered, Uzodinma is working on a new project, which he’ll not discuss, other than it being on HIV.

Uzodinma is a graduate of Havard University, and he is back in school to study medicine.

Mindful of the wide gulf between medicine and writing, he intends to handle the two professions, ‘carefully’. Currently, he has found a way to adjust his time. He tries to wake up early, before classes, and do some writing for two or three hours. This seems possible, because of the connection with him and his writing, which he began writing since he was in primary three.

“I think it’s incredible that there is a resurgence on the international scene of “Nigerian” fiction and writing.” It is not as if people have not been writing, rather it is simply a developed interest, and this excites him.

For Uzodinma, “writing is life. It helps me organise my thoughts – how I interact with the world. It’s a little strong to say that writing is life; I mean I obviously have other things I do, but it’s so integrated into the way I think of the world and my life.”

Beast of No Nation is a story that raised dust among critics. Some even believe it is simply an attempt at propaganda. This is mindless of the pungent issue which the writer deals with. Iweala considers his book ‘a novel’, not a tool of social protest, except that it does have ‘social or political implications’ and he says, “yes of course, but I wasn’t trying to write propaganda. That doesn’t appeal to people and doesn’t change things. Stories do. Stories are more effective and stories are fun and entertaining. That is what I want to write because that has a subtle way of addressing people’s concerns and issues with a particular social or political happening. I mean imagine if Achebe had just gotten up and shouted from the roof tops colonialism is bad. Would the world have listened? It’s his stories that did it.”

Accepting that the African experience of oppression enters different phases. The writer has the job of informing and painting a picture he sees to his readers. In the present time, there is a stereotype of Africans as the suffering masses.

As a writer, Uzodinma feels the frustration of being seen in one light alone. However, he thinks, “Africans need to be honest about the problems the continent is facing. I think that many of our writers are brutally honest and that’s a wonderful thing.”

That for him, does not mean that writers outside Africa are less Afrocentric or patriotic. It simply means that they want the best for Africa, because they love the continent. “It’s precisely because you love something and want the best for it that you criticise. I do think as an African writer that how we highlight the negative aspects is very different from how outsiders do. I think that an African’s understanding of situations both positive and negative in Africa is much more nuanced than the outsiders and that’s a beautiful thing. We don’t fall into these simplistic distinctions of everyone is starving or everyone is a clap, happy – dancing villager. The greatest crime of the West is to treat Africans like simplistic and simple minded people – that is why they colonised the continent in the way they did. If we can introduce a more complex understanding, a picture that shows both the good and the bad, that we are in a sense fundamentally human, then I think as writers we are doing our job.”

WHILE Africa is dealing with its cultural and economic pigeonholing, Nigeria has gained reputation as one of the most corrupt countries in the world. Typically, being as passionate with everything he feels strongly about, Uzodinma acknowledges the ignominious treatment, which for him, is most blatant at Heathrow Airport, London.

“I don’t pay much attention to it unless it’s really blatant and I feel it’s worth my time to correct. I don’t think the world is fair to Nigerian people – if you look at what we’ve accomplished as individuals (maybe not collectively as a state) we’ve done a lot and need to start pushing that positive image more and more. We’ve got top scientists, legal experts, physicians, athletes. Other countries manage to bolster the positive image of their citizens; other countries have foreign ministries that take action when something happens to its citizens. I’m not saying our government doesn’t, but it could and we all could as Nigerians do more to make sure that people understand we have rights and are valued and thus should not be treated unfairly.”

TEN years is a long time, but then it is also a time to build dream on. “Maybe I’m a little ambitious but in 10 years I’d like to have finished my medical degree, written at least two more books, and have made an impact on human rights issues in the world. I also hope that I’ll be married with a couple of kids by then – my mother would like that.”

Like many writers, who are inspired to write, Uzodinma is influenced by the world around him. “It’s all about noticing and observing. There is something interesting in every moment. Music also really helps me. For some reason the right song can just open up a path of thought that becomes a story.”

Like every young man there is energy to do it all, “I’m not an exception,” he says.

“I guess I sometimes feel invulnerable and what not, but of course there are many things that make you realise that you are not in control of your own destiny. Of course we all have to recognize and realise that ultimately it’s all up to God.”

Why does he write?

Olajumoke Verissimo is a writer based in Lagos, Nigeria. She has published some of her works in various journals and books in Nigeria. She keeps writing.

I Write To Process The World Gently: Sefi Atta In Conversation with Ike Anya

Toni Kan Onwordi: Writing is profitable if you know how