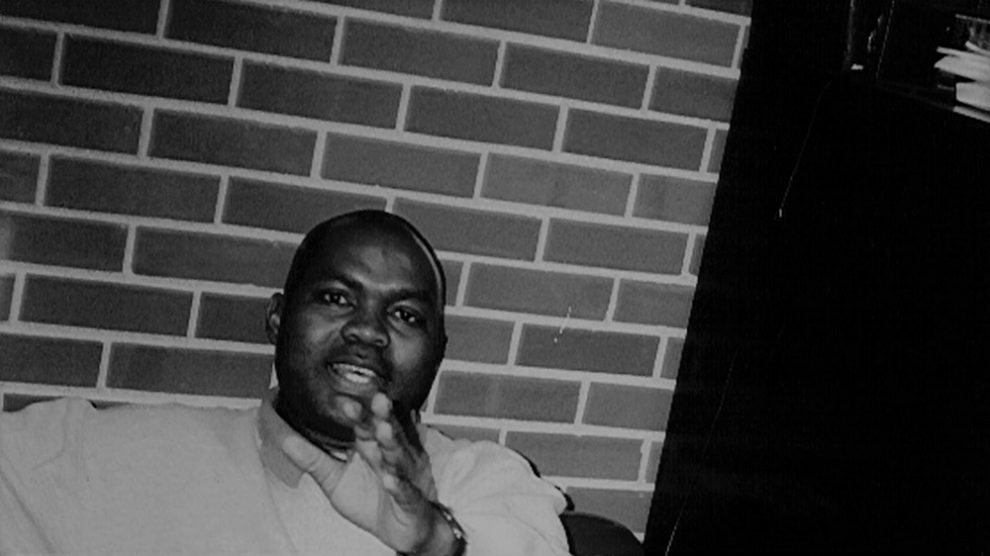 Not everybody likes living in exile, yet it could bring out the best in the exiled. Professor Obiwu Iwuanyanwu, director of the writing centre at the Central State University, Wilberforce, Ohio, is making the most of a sad reality in the US. Before his present appointment, Obiwu taught at the University of Jos and Syracuse University, USA.

He has published two books, Rituals of the Sun (1992), a collection of poems, and Igbos of Northern Nigeria (1996), the pioneer book on Igbo diasporaic studies. He has also published many stories and critical articles, including “Achebe’s Poetic Drive” and “The History of Nigerian Literature, 1772-2006,” both in 2006.

Economic impoverishment made it difficult for him to continue his doctoral studies with any seriousness in Nigeria. So, he had no other choice than to abandon Nigeria to become an economic exile in a foreign land at the age of thirty-five. “I solemnly regret that Nigeria has given me absolutely nothing but an insistent pain from my childhood experience of kwashiorkor in mid-twentieth century,” he tells Sunday Sun online from Ohio, USA.

Unlike what many of us think here in Nigeria, the experience of exile has its perennial irritations. But, in the United States, such socio-cultural inconveniences pale into insignificance when compared with professional opportunities that reward hard work and excellence, says Obiwu. For instance, in 2006, he was appointed a member representing all coaches in the national program advisory committee of the Honda Campus All-Star Challenge. On April 18, 2007, the Greene County Board of Commissioners honoured him with a “Resolution” recognition, which is passed into law in the State of Ohio.

The Xenia Daily Gazette newspaper also honoured him with its front page “Applause” award of May 1, 2007. He has just been appointed a member of the labour force and education committee of the Greene County Department of Development. “In comparative terms, such honours are definitely rare in the life of a normal Nigerian university academic,” Obiwu declares.

How could the teaching of creative writing enhance literature? The enormous resources that the American university system invests in writing and creative writing programmes, he says, indicate the society’s value for the skill and art of writing generally.

One of his former students at the University of Jos, Helon Habila, distinguished himself as a journalist in Nigeria before he became an accomplished international writer. Chris Abani, one of the most prolific and accomplished young writers in the world today, came out of the same English and literary programme as him under the tutelage of Professors Ben Obumselu and Michael J. C. Echeruo at Imo State University, Uturu.

Says Obiwu, “The possibility that creative writing will become a full-fledged programme in Nigerian universities is even more urgent with all the recent outcries against the entrenchment of poor writing skills among a vast majority of young, homegrown Nigerian writers. The standard of Nigerian writing at home has been on a rapid slide for many years now.”

Recently, he defended the poet, Tanure Ojaide, when some of his colleagues pilloried his position on new Nigerian poetry. What informed his position?
Obiwu replies, “I was opposed to the unscholarly verbiage or unguarded caustic language of Ojaide’s much younger opponents. Literary discourse neither precludes nor occludes aesthetic distance or linguistic decency.

Much of what passes for literary critique among many a Nigerian commentator is unnecessary self-assured ego-tripping and excessive verbal abuse. Such rhetorical debasement of discourse was pioneered in Nigerian and, indeed, African critical aesthetics by the Nobel laureate, Wole Soyinka, and entrenched as a tradition by Chinweizu and Femi Osofisan. The Senegalese, Leopold Sedar Senghor, and the South African, Lewis Nkosi, have variously expressed their displeasure in relation to the discourse of Soyinka.”

The poet, Omohon Ebodaghe, in a recent interview with Sunday Sun, lamented the “sterile cultural motifs” in African poetry. As a poet, does he think African poetry lacks a form, like European and American poetry, as he said? Or, what does he think are the distinctive features of African poetry, form-wise? He responds, “As the Igbo say, the firewood in a country cooks food for the people.

I don’t know, nor would I claim to understand, what is meant by ‘sterile cultural motif’ in African literature. Every national literature has its history; every generation of writers has its geopolitical locale and audience. Christopher Okigbo still remains the most seductive of all Nigerian and African poets till this day, as fresh and as relevant as William Shakespeare has ever been.

“On the one hand, politics and economics will remain prominent features of literary creation in Africa as long as the continent continues to be mired in the economic and political mercenary of the like of Olusegun Obasanjo.

On the other, if snowflakes and the rose flower are not ‘sterile cultural motifs’ in the Anglo-American poetry, why would palm-tree and the harmatan be any different for Nigerian poetry? Has the metaphor of witchcraft which Shakespeare celebrated in seventeenth century English drama not made a triumphant return in twenty-first century English fiction of J. K. Rowling and Helen Oyeyemi? Good writing will always shine through every cultural motif; and cultural motifs will always be ‘sterile’ in all bad writing,” he contends.

Obiwu is currently editing an anthology of Biafran war literature entitled Biafran Babes. Sunday Sun enquires on what accounts for the recent enthusiasm in the Biafran story in Nigerian literary thirty-seven years after the civil war ended. Obiwu replies, “The archetypal unconscious and telepathy work in mysterious ways in human experience.

All the efforts of Nigeria’s political demagogues to stifle the Igbo heart have fallen flat on their faces. The resurgent dominance of Biafran motif in contemporary Nigerian literature is a historical lesson on the irrepressibility of the human spirit. Biafra has survived the tragic machinations of such blood brethren and champions of genocide as Benjamin Adekunle, Obafemi Awolowo, Bola Ige, Aminu Kano, and Hassan Usman Katsina.

“To write is an act of fate. Writing institutionalizes the self, and the pen is a symbolic arrow thrust through the ugly heart of the father of the horde. Would an Awolowo, or a Hassan Katsina, have suffered a second heart attack were he to have witnessed the global celebrations of such a majestic Biafran testament as Adichie’s Half of a Yellow Sun and such a sweeping Nigerian burlesque as Iweala’s Beasts of No Nation? The Biafran Babes anthology is a creative testimony to the insistence of memory over forgetfulness, persistence of love over hate, and the perpetuation of life over death.

“That the intimidating narratives are a product of the best of Biafra’s children – who are also among the very best of younger Nigerian writers – demonstrates that what is repressed in the unconscious of the parent reemerges in the spirit of the child. This is the signifying telepathy that runs through the work of Chris Abani, Chimamanda Adichie, Faith Adiele, Afam Akeh, John Dureke, Chielozona Eze, Uzodinma Iweala, Dulue Mbachu, Okey Ndibe, Olu Oguibe, Ike Okonta, Nnedi Okorafor-Mbachu, E. C. Osondu, and Chika Unigwe.”

Does he think we have a crisis of confidence in African literary criticism, especially concerning the quality of output of new critics, as suggested by some veteran critics? Are the new critics faceless? Is their impact felt in Nigerian literary scholarship? Obiwu doesn’t subscribe to the view on the decline in literary criticism among his generation. “I honestly don’t know about any crisis of confidence among emerging critics of African literature,” he says, adding that he has only “read snippets of undigested views by a few journalistic commentators who don’t seem to know any better.”

Continuing, he says, “It would appear that many of us are still committed to literary kings and king-makers, without discernible key-makers to chart the path of critical resurgimento. I believe that the more my studies are available to Nigerian and African audiences, the more my critical thrust in literary history and comparative theory will become manifest. The late Ezenwa-Ohaeto was unrivalled in the originality and breath of his critical productions. Amanze Akpuda and E. E. Sule are two of the most hardworking literary scholars in contemporary Nigeria, and there are quite a few theoretical path-breakers now working abroad.

“Much of the criticism against the critical practice of younger Nigerian scholars, particularly in the Nigerian media, comes from the same person, Professor Charles Nnolim. The more I read his unrelenting attacks the more it appears to me as if he is pandering to the adulation of his Nigerian lecture circuit. I will not pick any quarrel with him because, as the external examiner of my Masters thesis, he has earned his place as a master. Beyond that, however, I have not read any concrete postulation in any one of his lectures to justify his attacks. It doesn’t say much for his current intellectual awareness for him to claim that younger Nigerian scholars could not penetrate or get published in international journals.

“It calls to question his presence of mind for him to claim that Professors Echeruo, Emenyonu, and Obiechina have given up literary scholarship. Echeruo and Obiechina have established internationally recognized critical schools and traditions in African literature. Echeruo’s theory of exile and white Diaspora in Africa has been adopted as standard praxis by the highest echelon of the South African government. Nnolim may as well devote more energy to crystallizing the critical tradition that he constructs or purveys.”

Obiwu isn’t one of those who lament the dearth of substance in new Nigerian writing. This informs his position that “Nigerian writing has rediscovered its wavering glory” and why he cannot be too critical of much of new Nigerian writing. “I am totally sold to the work of Chris Abani, Chimamanda Adichie, Helon Habila, Uzodinma Iweala, Chielozona Eze, and Nnedi Okorafor-Mbachu. I am intrigued by the poetry of Idzia Ahmad, Chiedu Ezeanah, Uche Nduka, Obi Nwakanma, Olu Oguibe, Sola Osofisan, and more recently Ahmed Maiwada, Obemata, and Tolu Ogunlesi,” he announces proudly.

Dance With Me Brother: Poems By Abdulrasheed Yusuf

Father of Children: A Short Story by Ahmed Maiwada