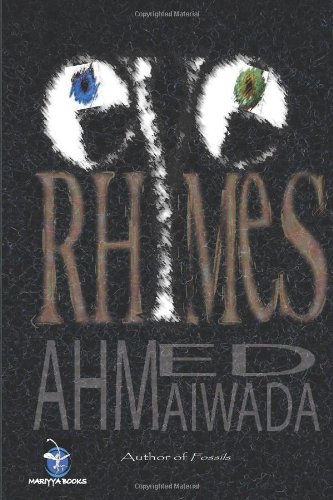 I had looked forward to the meeting and, apparently, so had he. When we eventually met‎, in Port Harcourt, the river of camaraderie flowed profusely – like the current of the River Nun, the old River Nun. It was much like the reunion after a war, of two buddies who withstood the nightmare of bullets, bombs, blood, and tears – together. We discussed literature in English and he asked what my projects were. He split the pod of surprise when he thrust a gift into my hands… His name is Okoroafor Chibuzor; his gift is Eye Rhymes, the third collection of poetry by Ahmed Maiwada.

You realize, from the very first page, that Eye Rhymes is going to be different from the steaming stew of poetry out there. The titles are among the revelators – most meaningfully long. In them the poet melds vistas of his literary wanderings – from Milton, Steinbeck, Dickens, (Samuel Taylor) Coleridge, (Andrew) Marvell, Thomas Hardy, the holy Bible, etc – into an agreeable coracle of poetic art and of his learning. He refuses the circumscription of convention, and invests his titles with commas, semi colons and dashes.

Maiwada’s idea of poetry, good poetry, shares a sororial affinity with Emily Dickinson’s. Over a century ago, in a letter to the American Unitarian minister, soldier and litterateur Thomas Wentworth Higginson, Emily Dickinson had described her idea of poetry thus: “If I read a book and it makes my whole body so cold no fire can ever warm me, I know that is poetry. If I feel physically as if the top of my head were taken off, I know that is poetry.” To Maiwada, a good poem should intrigue, fascinate, provoke; it should upset the indolence of the status quo; it should be able to annex a palace somewhere in the orchard of the reader’s memory.

Eye Rhymes, a 56-page volume of fifteen divisions, interrogates a salmagundi of themes: the poet’s idea of the ideal poem and those who have strayed from the path of poetic perfection; his rapture with a particularly good poem; his war against doggerel and its promoters; his despondency over a trust betrayed to the seething miasma in the society, and his readiness to fight for what he believes in – the list is by no means comprehensive. The poems are mostly distinguished for their allusive vigour and flamboyant imagery. There is a trick to the titling of poems in this collection. The poet ensures that the titles in each division either rhyme or eye-rhyme. The first titles of the fifteen divisions of this collection have the following last words: “board,” “Marvell,” “dock,” “Oak,” “gold,” “Ass,” “plain,” “dice,” “drip,” “toss,” “frown,” “shown,” “foam,” “Cain,” and “hand” and their creel of (eye)rhymes.

With “Enter, Rhymes,” the de facto introit, Eye Rhymes draws you, willy-nilly, into its mass of meaning and mellifluence. In “The priest of Rhyme’s church rats and flock,” at pages 12 & 13, the poet relives poetry’s days of grandeur and regrets that poetry now languishes in the hands of hungry hacks:

It used to be a diamond-decked yacht,

Until the high sea pirates rose,

Wrecked and then sank it.

Butchers over the fallen masterpiece; (Lines 1-5)

It is common knowledge that not everyone performs surgeries; qualified surgeons do. The poet applies the same paradigm to poetry: It is singularly absurd to write when you are incompetent to do so. Not only does your mediocre scribble embarrass the pantheon of bards, it convicts you, ultimately, for murder – the murder of poetic art. In the next six lines, the poet, displeased, cautions:

I rise to caution all on

The poem that does not a sound

Is Adam without the heartbeats.

The blood of a martyr cries

And killers must face the charge!

If one must write, the poet insists, one must have a polished nib, the nib of distinction. He reserves no patience for indolent scribblers who produce water and think it wine. He is scandalized by, and implacably opposed to, the trend these days where trash is celebrated and treat ignored. In “Their holes in walls caused culture shock,” at page 13, he let loose his chagrin:

I hear of slam and sister scam –

The hall of poetasters brook no trope!

The classics waste; the trash is raised,

The plates on my table make maggots.

Till a pinch of souls is added,

Sham is that banquet!

The use of “poetasters” especially shows the poet’s contempt, which he brilliantly amplifies, in lines 8-9, with a metaphor:

The roll call of bards

Is roll call of word-wasting Taliban

The poet’s dismissal of this class of scribblers as “word-wasting Taliban” reminds the reader, predictably, of 18th century England, when quarrels were often started and settled in (satiric) poems. Alexander Pope’s Dunciad readily comes to mind.

In “She is the ground where dead men walk,” at page 14, the poet croons about the life of the well-written poem and the poet himself. What is good is remembered; it is eternal: Good rhymes live forever,

And the minds, gilded,

From days of bookshop reign.

The Wall Street and the Ivory spires –

The poet is not one to save his voice after an exciting encounter with a particularly well-written poem. In “Public, private, divine, mundane,” which draws thews from biblical allusions, the poet, enrapt, sings:

Your message that has dropped in;

The words – chosen, have seeped,

The cracks they have filled,

Walked on their water,

This water you have turned wine!

Your message that has dropped in.

The poet discards poetry for poetry’s sake poetics. He sees his poems as Kalashnikovs of change. In “Send the Kings casualties on a trip,” at page 36, he audaciously admits his weariness and anger with the crooks – the looters – in the system, and warns that he is no moron but a man of mental acuity and will kick them down in his poems:

Yet, those mints you’re stashing are to blame.

But, I hope you notice I wear the frame of brain

To capture you and bury you in a basin of pun.

I can see you wearing bullet-proof lies,

While I shine my stanzas with rhythms and rhymes.

Well, soon some rodents shall be kissing grime –

He sees poetry as having empowered him. And right to the last section of this collection, he fights; he condemns; he mocks the hacks, the incompetents of the poetic trade, who think themselves empowered, who have no definite roots and in their fickleness swerve with every wind. He is especially caustic in “Rhymes, enter, the King deal sword hand” (page 50). The poetic dart is for the wishy-washy quill:

Germany wants to be Greece.

But, Jacob’s cunning in the way –

The Swastika and David’s Star

The poet is well known for his candour: He is not one to swallow his convictions to please the crowd. He gives his opinion on issues, and they are usually sound and logical and flawlessly enunciated. Eye Rhymes spills this candour yet, with lancinating verve and finesse. Given the poet’s strident clamour for art, for the return of paradise in the surging sea of naff scribbles, it wouldn’t be long, I believe, before we regained that which was lost – in our poetry. Although he calls John Milton “Son of Muse,” in reality, Milton, in this collection, is his muse, and he invokes him repeatedly, in the tradition, no doubt, of early British poets. In fact, one has to be conversant with Milton to figure out the poet’s testament.

Maiwada luxuriates in a well-earned reputation as a meticulous writer. He is not one to mount the horse of haste and bolt to press to earn the toga of novelist/ poet. In much of Eye Rhymes, he reworks clichés into splendid phrases never before used in the English language. But clichés, those linguistic devils with perennial cloaks of innocence, still creep in. For example, in “Rhyme liner – rhyme-decked, floats to dock,” at page 11, you find the mordant grin of a cliché when the poet writes:

Her name, Noah the carpenter’s handcraft,

Indeed, “Rings a bell” actually takes the bell out of the poem: When not in use for stylistic effect as is the case here, clichés suck the meat out of any piece of writing. Also, line 2 of “Their holes in walls caused culture shock” should actually have read: The hall of poetasters brooks no trope! to make for agreement in number: Singular subjects go with singular verbs. Another area of note is in the title of the publisher. The cover of the page has it as Mariyya Books, while the title page has it as Mazariyya Books…

One must concede, nevertheless, that Eye Rhymes is one powerfully fresh offering, mentally engaging. Eye Rhymes draws you again and again into the lush verdancy of its depths. This collection recommends itself as an antidote to boredom.

John Anusie’s interests are markedly eclectic. Although he has work in
poetry, he stoutly dodges the tag of poet. A restless wanderer in the
land of words, he pursues the gods of poetry and fiction in his spare
time. He currently lives in Lagos.

Suns of the Dead: Poems by Anthony Okpunor