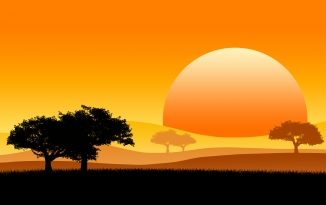 Moons and moons ago
we would go to the mountains at night
and dance softly in the moonlight,
like the flames beneath a brewing pot

we would speak in song
with whistling willows in the glorious
tongue of my forefathers,
which kissed the heart
like whispers floating in the wind

but that was moons and moons ago

Tonight, my pen croons in alien speech;
and though I wear the same ugly scars
that were on my late brother,
I have no speech of ebony with which
to pull down the walls in my mind:
I am no reincarnation –

all that was moons and moons ago
now all I can do is sit by my window
on a four-legged bed, with pen in hand
and in the morning, hope to catch a cup of dew
and at noon watch the rain wash
my distorted world back to me again

but in my prayers and in my dreams
of moons and moons to come,
we shall go back deep into the forests
chattering with the birds in ebony speech,
our hearts crowned with their plumes,
and adorned in lion’s manes –

-20 of 4, 2009
(Ebony Speech is a nostalgic poem, glorifying the Chagga’s (a Tanzanian tribe) and Africa’s rich cultural and – particularly – linguistic history while comparing it to a dull and lifeless present where Africa’s glory is being replaced with some sparkling global nothingness. It is a call to Africa to arise, look at its past and with one hand emulate it, while keeping the other hand busy carving a road to a brighter, truly African future.)

Trill in the night like crickets,
to sleeping ears
cry in the sea like a turtle,
sweet summer tears

but everything Nubian goes
!

sit in Jacaranda meadows
and write Kumalo a poem

for Selassie has died
and Cush speaks no more;
Nyerere is gone:
Nubia dreams no more
!

the lions have left the hills,
the savanna lies empty

the black safari ant
barters his rectum to the termite
but Mama Afrika has no more
strength to cry her dry tears
!

there is no crop to gleam at
for the fruit of the land is eaten, hidden
like Nubian nipples behind a kanga
!

and this inhuman carnage gives birth
like olden Nubians, as though
the future has its bed in history,

yesterday
today
tomorrow (?)
the day after (?)

(“Everything Nubian Goes” is an African cry for the continent’s diverse and rich people, culture, land and – generally – essence that is being lost and replaced by some dilute version of “Africanness.” However, it is implicitly laden with hope and a message that tomorrow and the day after may not repeat today’s sick story.)

Princely Hope Glorious is a Tanzanian-born poet and writer currently residing in Kenya. His debut short story, "Thrill Hill," was shortlisted in Kwani? Trust's 'The Kenya I Live In' short story contest.

Towards the Demolition of Jericho Walls: The Task Before the Writer in a Developing Polity

The Inconvenient Lover: A Short Story by Ike Oguine