Don’t Ask Me about Gods, or Demons: Poems by Nome Patrick 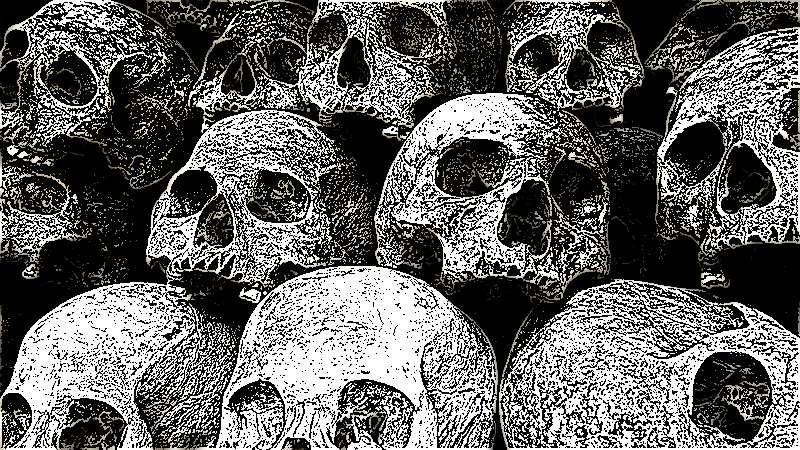 DON’T ASK ME ABOUT GODS, OR DEMONS

Don’t ask me how Ogun* tore the skulls of men
and sank his tongue to quench his thirst,
Ask me about the demon that caterwauls
in the palms of men…
A man picks a dagger and plucks a life,
they say he’s a fly that has followed
the stinking corpse of a demon to its baptism…
Don’t ask me how Sango** broke the skin of a city
with the inferno from his mouth,
Or how his axe massacred the streets of men
Or how his eyes sent snaps of lightning into spooky nights
Of sleeping ghosts and ghouls crawling into a city.
Ask me about the man that hits ecstasy
in pushing the breath of souls into a corner of pause.
When a man picks an axe and shatters the dream of a city
they say he’s a victim of negative mental revolution
that his head is a garden of gargantuan tumors spreading
like the sour breath of injustice in the nostrils of a city’s bourgeoisie.
The eyes of a boy down the street are a convent of demons;
His father is a song on the lips of a war lost
And his mother– a refrain in the lyrics of a pitched dirge
Don’t ask me how many demons scurry in this city.
Don’t ask me about the eerie demons
In Syria
In Nigeria
In Allepo
In those cities swallowed by crisis.
Ask me how to survive when the night comes
In the evil twilight of a wicked moon
Ask me which dance fits the rhythms of fear
Ask me which lullaby lures eerie hallucinations
Broken shade: a song for the dying sun –
the sun has gone with our strength, hope, pride
And the night is a sanctuary of demons:
Men of blood and fire and storm and…

OF DREAMS, SWEAT AND TEARS: A TRILOGY OF HOPE

Dreams:
there’s a room of cold songs homed in
the tongues of young boys, holding lit candles
each chanting a canticle for the new rainbow
that will crawl into the sanctuary of their souls;
there’s a revolution of revival
there’s a revival of survival:
there is hope wrapped in the drools of young boys.

Sweat:
there’s a river of gold breaking loose on our skin
falling into the heavy mouth of mother earth,
our veins are lined like wrinkles on the face of age…
We walk into rooms dragging the images of our mothers
like chimes of bells tearing into the heart of a town,
as a liturgy of determination – a relic of chivalry..
In our sweat: a collection of episodes of a black boy,
lie tales of stained virtue of our leaders and societies.

Tears:
a fountain of well pulped out like the proud heavens
flowing like a black sky beckoning a heavy storm
on the cloudy cheeks of young black boys
who know six hundred and six madrigals for their roots
shaken by the hands of religious, traditional, cultural
and societal turbulence…

Here,
“the little birds perch on the shoulders of plantain trees
tearing at its sinew, with a beak of courteousness
and collectively building an ark of nest
for there’s always hope after the storm is gone –
greenery flaps with gaiety and newness
and even nature springs up with a brightness as that of the sun”

Dear boys,
there’s a light of hope bouncing upon the end of the tunnel
you’re strong
you’re black
you’re beautiful.

Nome Patrick is a poet, writer and deep thinker. He's crazy about books, children and romance. He's a sophomore in the University of Benin.

Shadows of a Coming Darkness: Poems by Bello Akeem

Written by Nome Patrick
2 comments
My Lover’s Absence: Poems by Jonathan Otamere Endurance
I Tried To Paint a Girl: Poems by Henry Ajah