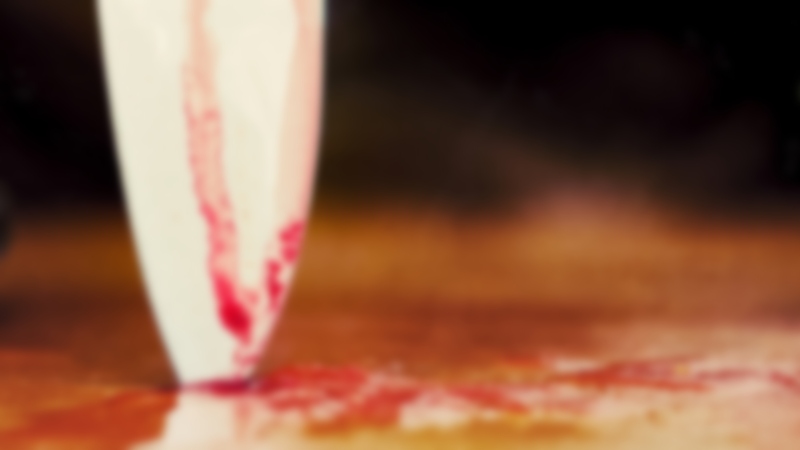 The blood-stained object falls, clattering as it kissed the floor and descended into wriggles like salted earthworm before lying still, dead. Ese, engulfed by shock, stares at the corpse and then back at me.

He comes in, wearing his knowing smile – I have not reported the previous incident to Aunty Ese. He breezes past me, brushing his hands, his warm skin against mine and I freeze in in my tracks, frightened. Aunty Ese does not notice. She never ever does. Sometimes, it beats why she never suspects anything.

Aunty Ese is not really my aunt; I’m not blessed with such fate. I’m only doing what people on the fringes of life do: being her house-help.

She works at wherever she works (do I need to mention that it doesn’t bother me?), and whatever her job is, it never affords her the luxury of staying at home often. I was handed the sole responsibility of taking care of the house – all that pertains to it, and of course, that doesn’t include fucking her husband.

Her husband, a wily cat of a man, armed with stealthy eyes, must have felt cheated; starved of his marital rights. It was only a matter of time before he began making advances at me. And boy, that man doesn’t give up!

Long before he began to express his hostility towards my refusal to meet his sexual demands, I had already noticed his traveling eyes around my body, probing every contour, much to my disdain and horror; to his pleasure and satisfaction.

It wasn’t long before I slumped under the pressure, before I became a sex toy. “Why did you open your legs wide?” – isn’t that the only question these people ever ask? Of course, it was against my wish. He violated my body, defiled it, using it to remind himself that he was a man; a man who had been starved of sex for long but had finally been rewarded for his patience, with a 16-year-old orphan who was only trying to stay afloat in the waters of life.

Once or twice, I had fought back, struggled to rescue some pieces of my shattered dignity from his wrecking hands, to rescue my womanhood from his clutch, but failed effortlessly. The last time – yesterday – I had tried to stand my ground; I was beaten and raped, again. A shard of the broken bottle, which acted as evidence of my little resistance, had pierced his right foot and provoked him to anger, and he beat me till his hands hurt. He raped me while trying to strangle out the remaining breath in me.

I had lied to Aunty Ese that I was bruised in the market while trying to stop a fight. She shouted at me, warning me to mind my business next time, as though I had not been doing so before her husband bashed his way into my life.

They are both crouched on the sofa, watching a family series on Africa Magic. I try to act normal and serve the fruit drink I had just made from the bananas and oranges he brought home from his farm at Ikorodu. I look up; my eyes meet his as he smirks at me. His gaze returns to the TV when Aunty Ese looks at him, holding out a glass of juice to him. I am angry at her; she never sees anything even when it is staring her right in the face. She has never looked like one to suspect her husband. The drama on TV has piqued her interest, and so, she does not see him throw a kiss to me and chuckle; chuckling at my fear, my defenselessness, and at my cowardice to let it all out to his wife.

I proceed to my room, crying my soul’s hurt out until it can bleed no more. I hear her say goodnight to him and saunter to the room they both share. Her job takes a toll on her and often, she goes to bed before everyone.

The TV still speaks, and I know he is waiting, waiting for her to finally drift off to sleep before he comes for me, the meek lamb waiting to be slaughtered. Minutes slip past and I hear the TV go mute. I quiver in fright. His footsteps draw closer and I cry again, my soul giving way for the bleeding to resume.

He comes in, smacking his lips again, like he did the previous night, and the night before the previous night, and maybe, like he will tomorrow night. He shuts the door behind him. Slowly, he undresses himself, his brown eyes shining with mischief, lust, and fury. I draw close to the wall near my window. I can’t shout: no one would come to my aid. I smell his cologne, his hot breath greets my face, my neck is violated by his lips and his strong hands grip me. My soul accepts its fate. I close my eyes and lose myself in his lust.

I wake up with a start. My heart is bothered, scared that he may come inside again to hurt me; defile me. I sit still, waiting for my racing heart to successfully finish its course – running.

My eyes slowly explore its environment, darting from one end of the room to another. The memory of the previous night floods my mind, mocking me once again.

Aunty Ese is set for work, he is not. I hear her call the family doctor to ask for a prescription of drugs to buy and administer to him – he is sick. I know he is feigning it; he couldn’t be really sick, after such a rough night with me.

She asks me to take care of the house; to take care of him. From the corners of my eyes, I see him smile his knowing smile. I realize that this ailment is a sham, a wicked scheme employed by him to molest me again. I smile helplessly; I was in for a bigger problem.

She leaves me with the doctor’s number to call in case of an emergency, and hurriedly leaves for work, leaving my overused body at the mercy of its tormentor-in-chief.

I can’t tell anyone, not even when she calls again to check on his health, which is at its best state after nourishing himself with my battered body.

He is gone now, fast asleep, I think. I hate myself. I want to die. The emotions in me begin to conflict; anger and hatred and vengeance gaining ground. I am led by the trio into the kitchen, towards the utensil section. I pick up the red-handle knife and walk like a zombie, in tears, to the room upstairs.

I draw closer to him, the blade shining with my hate, anger, pain, frustration and the humiliation I have stored up in me. I clutch the knife harder, every nerve in me exploding in fury in a moment of adrenaline rush; I am getting my revenge. I raise the knife, praying silently that my heart doesn’t fail me, and it doesn’t.

Everywhere is silent; even my breathing has slowed down. My heart is racing with the tempo of my emotions.

He senses that someone is near him and opens his brown eyes…for the last time. He screams in fright as I let the blade brush through his neck, slicing his throat open. His body wriggles from the bed and falls to the floor. I feel at peace. I drop the knife, satisfied. I turn to leave and I am met by Aunty Ese’s terror-stricken eyes.

Okafor Ugochi Winnie is an undergraduate of English at the University of Uyo, Akwa Ibom State. She is a lover of literature and sports. Her short non-fiction is featured in an anthology published by BrittlePaper.

Chronicles of a Curfew Foretold: Fiction by Kabu Okai-Davies

John Chizoba Vincent
We use cookies to ensure that we give you the best experience on our website. If you continue to use this site we will assume that you are okay with it.Ok