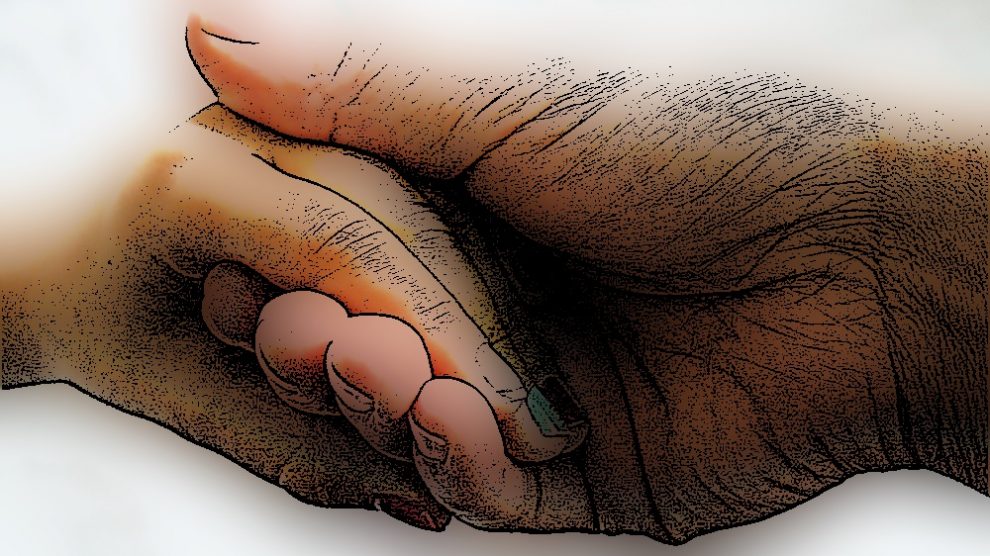 Maryam and Ovie met on the first day of her internship. He was her instructor, and they bonded immediately and their relationship soon moved beyond the long office conversations to date nights.

A few months later they were in his apartment having a discussion on gender equality. Maryam was of the opinion that the world needs more female leaders for men to truly understand the level of discrimination they have to contend with, but Ovie disagreed, giving instances of women who have had the opportunity to occupy positions of power and had disappointed its use. His summation, bordered on patriarchy, angered her so much that she stormed out of his apartment.

“We’re through!” she yelled shortly before the door banged shut, almost regretting why she fell for someone so backward in the first place.

Realizing he was about to lose the most beautiful thing that had ever happened to him, Ovie immediately threw open the window and called out to her as she marched resolute towards the gate.

That got her attention and she paused, giving him the time to run down the stairs and catch up with her.

Appeased, she wrapped her hands around both of his and hugged him, after which they both walked back inside with passers-by watching them.

In an alternate dimension, Ovie quit his job as her instructor because of the company’s policy against members of staff getting romantically involved and instead got trained and employed as a coach in a junior league managing Bendel Insurance Football Club in Benin City.  One time, he asked her if she was happy he resigned his well-paying job as an instructor, but she said “No, as long as you are happy, contented and we are together, I’m okay”, while she kissed him on his fore head.

In another, Ovie grew to become the CEO of the company, with the company going through rapid changes, growing in revenue by 10 percent year-on-year and being inducted into the Renewable Energy’s Who’s Who. But she never told him promoting her even though she was due almost cost him his job, till she offered her resignation to cater for the kids as a house wife.

In the third dimension, both of them were laid off by the company. While Maryam got another job as a 3D designer in an architectural company and was promoted to the role of vice president after seven glorious years of service, Ovie never got his career back on track and had to stay at home to care for the kids while she caters for the family financially.

Even with pressure from her family to divorce him, Maryam stood firm, showing him nothing but love and respect.

Though both of them never had the dreams they wanted at one point in time, they were both happy, in more ways than none. They travelled the world on holidays in one, built a well-rounded future for their kids in the next, and they were childless in another but they could afford happiness and comics.

In all of these dimensions, Ovie and Maryam held their hands as they walked back into his apartment building.

However, they didn’t see an oncoming 2009-model Toyota Camry, with the driver drunk behind the wheel, speeding at 200km/h in a 50km/h residential area, knocking down both of them. First, Ovie’s head smashing the windscreen, his body rolling over the bonnet of the car before hitting the tiled pavement, while Maryam was completely run through by the car, both legs completely incapacitated and her right hand dismembered from her body.

As bystanders raced to the scene to offer assistance, the bloodied and mortally wounded couple stared into each other’s pain-filled eyes one final time as their lives drained out of them.

Austine Osas is a Nigerian writer who was an executive producer of the Kickstarter backed Chronicles of the New Born and co-organizer of the Lagos Comic Con; whose writings have appeared on Africa.com, Africanwriter.com, Kalahari Review, AFREADA, 600 Second Saga, Bewildering Stories and Antipodean SF; whose fantasy story "Under the Sun" has been turned to a comic series by Peda Comics based in Nigeria, with partnerships Thompson Reuters and The African Centre (UK). You can catch him trekking the landscape of Lagos and Abuja documenting the lives of everyday people through his lenses. IG - @austine.osas