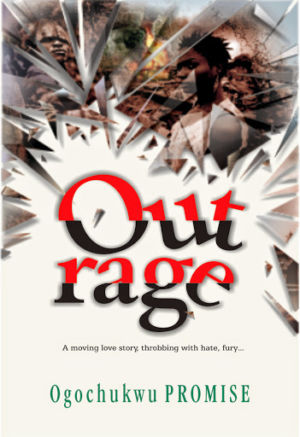 Today, what is happening in the Delta is black on black crime. Nigerian leaders are colluding with oil companies to do to the Delta what would not be allowed in the hog farms of America. It is an outrage. That is the point that the book Outrage by Ogochukwu Promise manages to mangle in about 340 very long pages. The writer Promise takes on the ambitious job of capturing the devastation of the Delta in prose and sometimes in poetry. It is truly an ambitious project that falls flat on its face and then crumbles from its own weight because it is built on a rickety anemic foundation. The book is a nightmare in terms of design and structure and there is ample evidence that no editor ever read this book. It could have been saved by a professional editor. Perhaps. Reading Outrage was an exercise in frustration. Here is a writer resident in Nigeria the scene of the crime, she has several rich stories to tell she has a booming poetic voice and she has the energy and the passion to go with her gifts. But then you read the book and wonder did an editor even as much as glance at this book? This book was obviously never edited.

Don’t get me wrong, Outrage was an ambitious project; a lot of sweat equity went into producing the book. And it has some promise in several parts. The book’s prologue that sets the stage for a story involving generations of fighters willing to fight for freedom for the people of the Niger Delta is almost worth the price of the book. It is a good short story in its own right. The poetry when Promise invokes it takes the reader right to the mysterious Delta of the poetry of Okogbule Wonodi, Ogaga Ifowodo, Gabriel Okara and Tanure Ojaide. It invokes incantations of our sisters and mothers of Africa gently pounding the earth in dance until the pain goes away for a bit.

There is promise everywhere: The book’s cover is inviting – an angry young man, with bloodshot eyes glowers at the world, fire everywhere, red everywhere. Judge this book by its cover at your own peril. If you are trying to understand the problems of the Niger delta this book will not help you.  I really couldn’t tell you what the book was about and I read it a number of times. It is a busy book, cluttered with way too many characters; I needed a genealogical chart to trace the characters’ journeys. Ironically, plotting the chart of characters made the story even more improbable. Chronological ages were not lining up with the story’s trajectory. There was some good poetry wasted by bad editing and clichés. In the end, the story morphs into a deeply improbable tale made murky by the writer’s insistence on sticking to a certain plot, credibility and probability be damned.

The story speeds past huge swathes of time just to get to the writer’s anxieties. It is hard to tell what era one is in. Even though the story presumably starts in pristine times, there is a life-size Sony flat screen TV set early on in the book. Confusing.  These gaps are unforgiving in their constant reminder that the story is missing many ingredients despite its richness. Where for instance is the shame of Biafra in this story that started well before oil gushed out of Oloibiri?  The omission of the Nigerian civil war in this book is strange.. I would say that the book is too rich in seasonings, too poor in coherence. My advice? Read the prologue Sunrise, skip everything else and then read the epilogue. The story begins and ends there. Everything in between is sheer tedium. I would know; I read the book three times. This is unfortunate because Promise is a writer with obvious talents, poetic sensitivities and a prodigious industry. She has published by my count almost two dozen books, she is no slouch. I hope that her other books are not as sloppy as this.

The book Outrage is an abject lesson about the power of expression – of that which we know. The Niger Delta throbs like a viral phallus in every cell of Ogochukwu Promise’s consciousness. Hear her poetry, close your eyes and you can feel the salt sweetness of the Delta. Outrage also offers many lessons beyond the injustice and horrors that have invaded Nigeria since that wretched day in 1956 when someone attached a mean breast pump to Oloibiri’s breasts and started screwing the beautiful people of Nigeria’s Delta. The book tells the unintended story that what is happening to home grown literature in Nigeria should alarm lovers of Nigeria. There are bright spots but the publishing industry is barely struggling, producing sub-par works. Outrage is an exercise in carelessness; there are all these misused metaphors and grammatical errors galore litter several pages of the book. Words are frequently used inappropriately – hens “quacking”, goats “blithering.” It is my fervent hope that this book is not being used somewhere in Nigeria to guide instruction. No editor read this book, indeed, I wonder if a spell checker was turned on as the manuscript was being written and that is a big shame. There ought to be some standards-based process for allowing a book to be published.

In fairness to an editor, the book would have been a challenge to edit. It is not enough that words are often used inappropriately; “weather” instead of “whether” etc, the book was an overly ambitious attempt at writing an epic. It ends up, by poor design, being merely an epic tome. The story drags on and on over many (I mean, many) decades and gamely hangs on to the story and the main characters until it is mathematically possible for a human character to mercifully die off at a biologically impossible age (I calculated!). Part of the problem lies in the strong will of an author who is grimly determined to tell a story, plausibility be damned. An editor would have helped to chop up the story to a manageable, delightful edible size. Sometimes, the book races blatantly to a desired point by merely short-circuiting all credibility. For example, Arogo, one of the main characters does not see the inside of, presumably a primary school until he is 14, he attends this school for just four years, after which he is admitted to presumably a university in England. He leaves behind his wife (that he conveniently married in the village before he leaves) returns 15 years later to the waiting arms of his wife and son and proceeds to basically picks life up from where he left it and his family. Possible but improbable.

It is sad that fully five decades after Things Fall Apart was published, the Nigerian publishing industry is still virtually inchoate as the environment that drove Things Fall Apart to be published abroad. In many ways when you adjust for all the enormous resources available to today’s writers, one could argue that the publishing industry has gotten worse since then. Sure there are incredibly bright spots, like Cassava Republic, blogs and websites, etc, etc, but these are sadly outliers. There are many reasons why things are in near disarray; it  is not all the fault of our writers. To say for instance that successive Nigerian governments have been irresponsible is to engage in polite understatement. There is not a shortage of passionate, talented writers like Ogochukwu Promise in Nigeria. But the sad quality of the production mirrors the sad quality of virtually every production from virtually every Nigerian institution. Art imitates life’s reality. The frustration with all of this is that there is a beautiful story in the book Outrage. In the undisciplined hands of vanity printing, the result is a tedious disaster. It is a rich but inchoate tale told by a talented story-teller whose voice has been garroted by a communal mediocrity largely beyond her control.

What To Do When You Meet A Girl In Traffic, Crying: A Short Story by Amran Gaye

Tembong Denis Fonge
We use cookies to ensure that we give you the best experience on our website. If you continue to use this site we will assume that you are okay with it.Ok