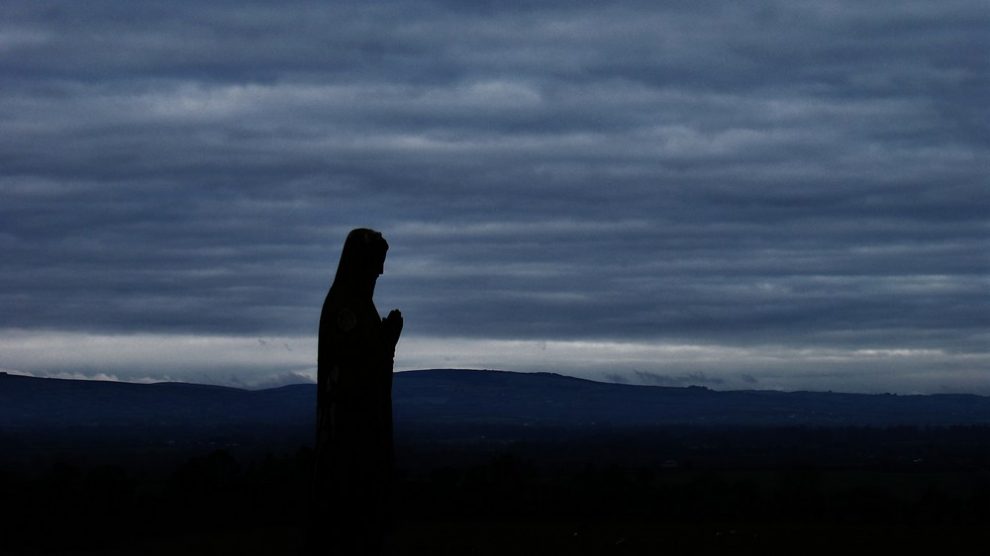 The tremolo screams from her throat
like a Painted Bunting.
A black violin like a baby
rests on her arms.
Diva among the ladies of the Sahara,

blessed are the notes you offer
the orchestra of birth,
Amen.

Holy Mary,
Mother of Grace
sing for us seers,

the girl the country could not read under the bomb-brightened
letters of its own name,
who moved the class out of the teachers’ length of eyes,
the stars study their solitude as they variegate the Gworza Hills in the night;

cities hidden from the rape cameras,
and the power of the government that says cheese
behind the green shots.

Do not say cheese, say live or aspiration, read the smiles, a book is God,
you carry in your bags the redemption.

Take up your pen and write the country on your mother’s breastmilk,
suck again the incorruptible life, salvation is juice, drink puritas.
Teach the Heavens the art of war is not the making of a nation out of
girls, let them read under the stars the unopened page

the long history of guardianship and the Ibo slaves who chose
to drown in death without their guardian angels, before the land they were thirsting for.

Study the movement of the alphabet, teach and live,
let the others that will come after you grow from the two religions
written on the body of West Africa, read them as one book.

NEWS FROM A BURNING TV

She wrote her life for the now-defunct corporation, The City,
Stephanie, my favorite war reporter,
independent in her own funerals in front of the digital cameras,
her existence comes from the pictures
and the alphabet voicing their inked shapes or grand humanities.

Quite a demanding Hercules of a First World profession
for a Third World woman, single mother.
And Jagz, her child, pushed her singular birth
to the limits in the streets of Jos holding the mob and the government
in a detonated policy, coal dusts fog traffic, the hills unclear, The City.

Son, they say your father lives in your mother’s future.
A young American returns to it in the night, crawls out at sunrise.
His accent full of verses, he promised to build a house for it
with the poetry of his homeland or that of a New Yorker.
But, first, we have to find a man we know who can lay the bricks,
and that can only be your father, at war with South Sudan.

They say he will be murdered by a white man Whitman,
in the ten thousandth year, 2090.
They say the Army cannot bring the year by road to The City. The media.
So I am waiting for a private jet, to bring him home.
I know electricity has little or no power where you are, still, turn on the lights.

Stewed, you touched a button and died in the night as the TV went up in flames.
In your bedroom scenes had run riot in black
and white or like drunk insects in a 1960s photograph.
You were watching, listening to your mother’s autobiography, a lover’s philippic.
So long a documentary, a taste of her thirty years old politesse.
She fought hard to play for you and the country the footage of a genocide shot
as her private movie The August Grave. Massive.

The City sent her notes of condolence long written in her Boss’ handwriting.
She lives in your coffin or Television, broadcasting the evening news.

Tares Oburumu is a graduate of philosophy from the University of Benin, Nigeria. He’s a lover of God and his daughter Sasha.

My Father Refused to Die: Fiction by Wesley Macheso

A World full of Characters: Kabu Okai-Davies at the 2016 Bookworm Literary Festival

The Hawk no more has Claws: Poetry by Olubela Christopher Oluwamurewa

Death of a Patriot: Creative Non-Fiction by A. Igoni Barrett

A. A. Rufai
We use cookies to ensure that we give you the best experience on our website. If you continue to use this site we will assume that you are okay with it.Ok