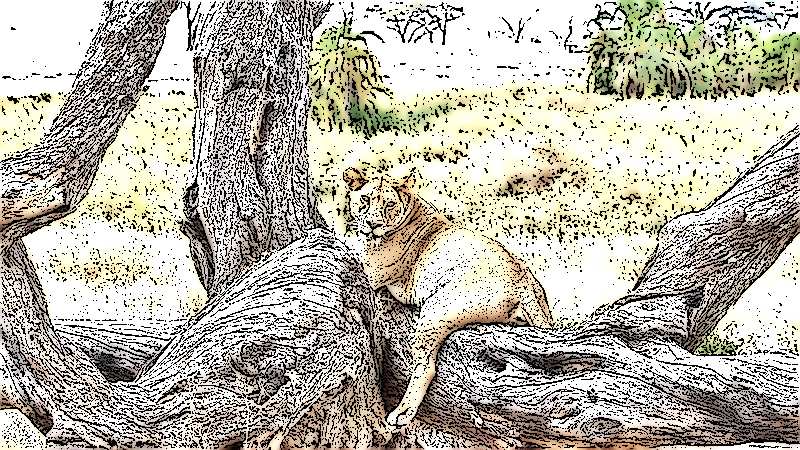 THE SONG OF EXILES IN THE SERENGETI

(Dedicated to resilient rangers and workers of the Serengeti and safari in Kenya, Tanzania and South Africa for protecting the African geography and ecology with their lives.)

Oh! It’s time!
It’s time to listen gingerly
To the flat chant of the plains
Where Africans became Africans – the Maasai,
Where birds learn to unlearn their songs,
Where flamingos learnt to migrate,
And amber through the places their daughters would go,
Where the rhizoids of mosses miss the
Nimble actions on the plains,
Where poachers and rangers hide and seek in plant labyrinths
Laced with thistles and
Savanna swords in the arms of trees as thorns.

It’s time to listen gingerly
To the
Whispers and hums of
Extinct floras and faunas
Faintly crooned by the
Testimony of fossils here,
The elegy of dinosaurs.

It’s a time to listen gingerly
To God sighing intricacy into mangroves
To boy lions knitting soft roars through thickets,
Grasslands and woodlands in half un-governance
Afore exiling lonely lions as homecoming sons.

It’s a time to listen gingerly to a
Lion’s roar and the tenet of these plains on tip kopje
Kiting their kids where the rill oozes.
She owns the tombs of herbivore
Shared in the stomach of fierce felines,
The famous death twirls of Nile crocks studying
The anatomy of wildebeest with claws and canines,

It’s a time to listen gingerly
To paraphernalia of death;
The rhythms of stealth and sinusoidal murder
To Leopards, hyenas, cheetahs,
Mambas and Cape buffalos
And lions exiling sons.

It’s a time to listen gingerly
To the resurrection of an illustrious song
Chanted
In rabbit-warrens
In mongoose labyrinths
In swamps of wading shoebills
And
In clumps of mosses.

It’s a time to listen gingerly
To the cry of baby death
Below the horns of cape buffalos
Below the horns of rhinos
In the orifice of female Nile crocks
In the pancreas of eyries
In the mires of baleeneceps
And
In the dens of sons.

“I do not set my life at a pin’s fee;
And, for my soul, what can it do to that”
-William Shakespeare

The ailing air was bugling into my
Chest because I was sand wearing a black song,
My joy murdered like silence by the waterfall,
It was a song sung whenever inferno burns silence
Into a dirge and a requiem intertwined in sotto-voce,
Behold! Men lowering the sarcophagus,
Now the gasoline fueling the silence
Of this crooning song is beheaded, the song bleeds,
And it ruptures into a new air of squeals,
Screens, yelps, cries and
All walking on a ground made
Of me to his grave.

IN THE LAND OF BOYS

Then, the shimmering evanescent sorrow
Began unlearning how to
Disappear into itself, cringing men into boys of
Half injured moons,
That was the warren into
A new morning,
Where some of these boys ate,
Even their epicures ate unyielding memories
Ate brown weeds burnt by dint of
Yesterday’s blessing of bombs,

I used to feel a cave was a kind of Jesus,
A kind of lump – a glacier in the penchant of the sun,
A kind of oasis in a land of fire botching to burn,
But the caves here were farmers,
Planting the boys unharmed into death,
Half burnt soldiers were fluting boys
Out of woes with the broken bones of burnt boys,
Out of their death
Out of bomb bug-ridden caves

This was the moment long awaited,
Where the voice of the river began to chime,
Calling the boys for a better death, yet noticed.

Until the ailing air became fetid,
From the cries of chest and legs in the morgues
Begging for Hades
Begging to be corpses
Begging for rediscovery,
That was the cladding of the land with a song sung through the beaks of vultures,
These fanatical vultures will live to see their golden
Generation of successful evil.

Soon, the world here will understand no one
And tongues will thrive with the piquancy of
Amnesia, forcing the frustrated firmament
To botch its cladding over this geography.

Ask Nigerian women how they lost their men to peace ,
How eerie created tranquil
How their voices were crinkled into waves of men
Painting their armistice with corrals of guns and slugs
How their men carried crosiers birthing bullets of peace that slay
How demons wore their love as wraiths in the body of a new sky
How crises weaved them into young crones like children
making their debut boats of them, boats of skin
Ask them!
How men with hard green berets waltzed into planes and came as cremates
Or with two windfalls of wool in their nostrils
Or bodies festooned with evil white havened in sarcophaguses
Again
Ask them!
How they began to develop smiles with tufts of tears
How their default air reeled from sordid to fetid,
I mean the hyphenation of twin sorrow and surreal
I wanted to say the matching of men in and out of limbo,
I mean their twitching and wriggling between death and death
I forgot to unlearn the matching of men in and out of souls
I didn’t talk about their enamel of gremlins

…ATE PART OF THE WORLD’S BODY

Now the holocaust is you
Because you were the mother to him
You bestowed to him milk
Made by him and on him
Made God make the flesh inside
Your breast into milk
Sucked by death,
Awarding himself
The holocaust of 6 million Jews
To the world in
Inhumanity of saying
The Jews aren’t humans.
The tongue of the world’s map was punctured
And once again the world waxed weaker.
================

When My Lips Part: Two Poems by Atuhairwe Agrace Mugizi

The Tortoise and the Gem of Priceless Value: A Poem by D.M.D. Goodhead

Waking Up in Kampala: African Science Fiction by Wesley Macheso

E. E. Sule
We use cookies to ensure that we give you the best experience on our website. If you continue to use this site we will assume that you are okay with it.Ok