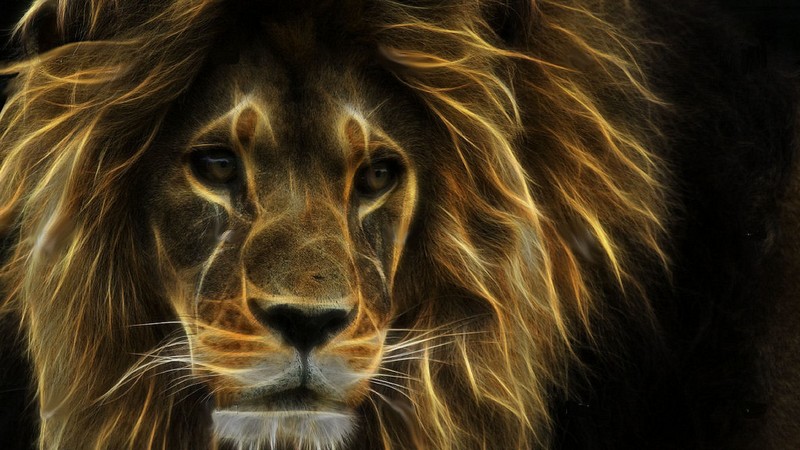 I watched it take aim, silent as a shadow. They were skilled, these humans. I waited. The tense moment, the silence after the lightning flash. Before thunder, when everything was magnified. Time stretched. My padded foot could feel the undergrowth with ultra sensitivity. I watched the hunter take aim. I was hungry, slightly so but not enough to be bothered into hunting. That didn’t mean I would let this human steal my mandate. I had pride as well as a pride. I was king and my subjects were food, my food. None would eat them save I permitted it and I didn’t permit this proud, conceited human creature aiming his long fangs that shot projectiles at one of my subjects. The deer he aimed at was oblivious. Oblivious, and the human creature, annoying. Long Protruding weapon in his hand, shorter protruding one in between his legs. Both they shot with utter carelessness until they had populated the entire planet with their own kind and nearly emptied it of mine.

Out here in the jungle kings died. Kings died aplenty. In their palaces, even worse. But not today. Today this king would live, protect its subject, and then eat it at his own time. I watched the human, its finger curled around the trigger of its weapon. It would shoot now. Then I stole the thunder, took the moment. The roar of a full grown African lion is a frightening thing. I shook the grove with the sound of my voice. Birds took to flight. My subjects roundabout would now hide and flee. But no, not the human. Stupid creature that it was. In the magnified moments of time, I watched a dark wetness suffuse the patch of skin it wore around its crotch. The same instant as it pulled the trigger of its gun. Its aim was off though. No one who pounced or shot in fear did so accurately. The bullet grazed the deer still. I watched it dart off into the forest. The human looked around nervously and then ran off in another direction. No one stayed long after hearing that voice. A king’s voice. I was really proud of it.

I pattered of to inspect the spot where the human had tried to usurp my mandate, growling softly in wonder at the effrontery of humans. On the ground I find its hunting gear. I sniff at them. They reek of human. Washed human. Typical. Creatures that get in water too often. Nothing like the clean, natural smell of lion. Or lioness. Especially lioness. Another smell comes to me, ranker than average human. I tentatively test the damp ground with one claw. Is that urine from when the human wet itself? My roar made my lionesses wet themselves too. Though in a different way from this human creature. I growl. Is that blood I smell? Sharp and sweet. Unmistakable.

I sidled in that direction, moving unhurriedly, drawn by that oh so sweet smell. I found patches of blood, rich red blood on the ground. The deer was wounded. This blood was too much to be from just a graze. The deer had run eastwards towards the rising sun. I could see this from the trail of blood. A trail that tugged firmly at my glands and hunger buds. I hadn’t fed in a while and I could feel the faint pangs of hunger calling from a distance. It was curiosity more than anything that pulled me onwards. I followed the red trail. Rays of light leaked in through the thick canopy of trees above. Slowly my patter became a lope. The scent of the deer’s life whispered to me. It would slow down, I knew, tire. I followed the droplets on the forest floor. On and on we went but it did not tire. My hunger increased. Whispers became incessant urgings. My glands spoke to me. I did not listen. I went where I would. I ruled the forest; my hunger did not rule me. Where I went was at my own behest. But the blood on the ground that lit my path was much more, thicker and oh so richer. It was dying this animal. Why didn’t it lie down and die. Didn’t it know that its monarch needed to feed? Then it dawned on me that I was hungry. Gradually the faint urgings of my stomach had become hot pangs of desire and anger.

I tore into a clearing ahead of me in a short burst of speed and found the deer. It was standing. Barely so. Its legs wobbling but it stood looking me in the eye. Staring death in the face as human creatures would say. This was how one should face his death, on one’s feet. Not on one’s knees with arms raised in supplication as those paltry creatures humans did. What god they prayed to I could not fathom. There was only one god, one king I realised finally. And that wasn’t me. It was part of me but not me. I finally worshipped, answered the call of my pain and passion. This hunger I would sate. Ungodly yet divine.

The deer tried to run at the very last. Natural instinct overrode whatever reason had made it stand before. It tried to leap off but my claws bore it to the ground, rending its tender flesh. My fangs tore into its arteries. Rich red juice spurted into my mouth. Dimly some part of me wondered if when humans fed they felt anything this divine. God!!! I bit into its succulent flesh and tore off a limb. Human creatures when they died dreamt of a place of eternal bliss. When lions died did they go to such a place? If they did it must be filled with deer. And humans. Only if there were deer, and humans, and lions, who would it be bliss for.

I shook my head off the deer’s blood and the accompanying foolish thoughts I had been having. One’s mind always did travel in moments of intense satisfaction and pleasure. In the cusp between the pain of hunger and its satiation. I let the thoughts flow away like water from loosely held fingers. I had fed. I was master of myself, I was king. I ruled again. Until the next time the king in me reared up to rule me. I tramped of, clear headed and in control. Then I caught a scent nearby. Unmistakeable. The smell of creatures nearby. Only my avid hunger and consequent feeding had let me miss it before. Curiosity was back. Now that hunger was gone, I could feel that again. Those two could not exist side by side. Hunger was king, curiosity a vassal that could not stand the presence of royalty. It now led me to a smaller grove. Was this where the deer was coming? Was this why it had run so tenaciously, even as its life ebbed from its torn body? What was here? I saw and my kingly eyes widened. Its progeny.

This was why it had run so hard, expelled its dying breath. And made its last stand. What better place to die than close to one’s own. I felt it then. Remorse, sorrow, oh the duty of a king. How heavy it was. I had killed and fed to fulfill my part in the cycle of life. The food chain. It was heavy on my neck. But I had borne my part. That was duty. But as I looked on the new lambs I knew what I had to do now. Why the deer had strayed so far from its young I did not know. Whether in search of food for them, or for itself or a mate, I knew not. But I knew my kingly dues. One was duty, another was mercy. These baby lambs would not survive long in the jungle thus. They could barely now walk. They would suffer and no doubt meet a cruel and slow end. I could not let them go thus. So I fed too. This time not in hunger, because another king ruled me but because I was king and knew my due. I fed and showed them a mercy. I saved them. It was a mercy I gave them. I wept as I gave it. The mercy of the wild.

Ekpeki Oghenechovwe Donald studied law at the University of Lagos, Nigeria and the Nigerian Law School, Lagos campus. His first two published works, Mercy of the Wild and The Contract were published here on African Writer. His short story, “The Witching Hour”, first appeared in Cosmic Roots and Eldritch Shores and made the Tangent online recommended reading list for 2018 with two stars. It won the Nommo Award for Best Short Story by an African making him the youngest writer to win the award. His novelette The Diary of The Dark Child got an honourable mention in the second quarter of the Writers of the Future contest 2018. He was winner of the Imbube creative writing contest 2017. Some of his other works have appeared in Dwart online, Anotherealm, Selene Quarterly and Strange Horizons. He is a first reader in SFF mags Cosmic Roots and Eldritch Shores, and Strange Horizons. He has a story forthcoming in Dominion: An anthology of speculative fiction from Africa and the African diaspora.

Nigeria is no Country: A Short Story by Ohikhuare Isuku

Namwali Serpell: Planting Seeds in a Garden of Intention