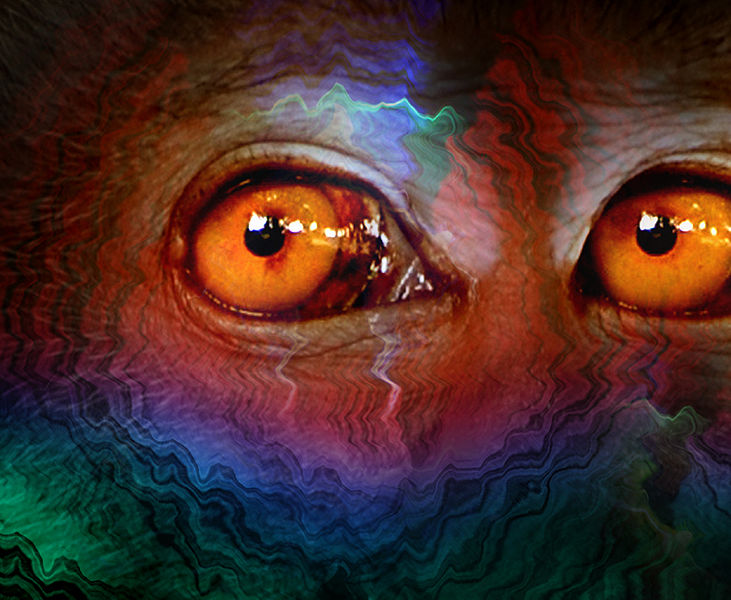 She couldn’t keep her eyes awake though she felt drowsy.  Maybe from the herbal concoction he had made her drink.  This one seemed to be much stronger than the ones she had been drinking before.  Her ears pricked to the sound of mountain wolves.  She had heard that a wolf or two had been spotted around the mountains.  Hugging her cold frame, she prayed they wouldn’t come, that they would not smell her, that the strong smell of the jasmine would mask her human blood scent.  Her eyes bulged with fright and watered from the cold she felt.

The sensation of yearning suddenly exploded in her breast – for a while forgetting about the cries of the mountain wolves.  I have to have one, she cried silently.  She had been trying for years!  Instead of their support, they called her names behind her back.  And instead of his support, he curled to a corner not saying a word, not defending her – which of them was to blame.

Every night they visited, the aggressive ones would shamelessly spit their venom spiked insults at her.  After they left, he would cushion his inadequacy at a pub near their home, while she would curl up trembling in their big bed and cry alone.

He wouldn’t go for medical check up.  They wouldn’t allow him.  “He is a man,” they would spit at her. “You are the problem!  Our family only has real men!”

The blood rose up to her neck as she choked grief and anger and let her freezing body fall back against the tree trunk as if she had been struck with a blow from the pain she felt.  Loudly she cried in anguish and pain, pounding her clutched hands angrily on the red earth.  Breathing in, she sniveled.  As she hugged herself tighter, she wished she had remembered to take a jacket with her.

At first she was afraid to ask him why she should spend every fortnight outside for six weeks.  The bone earring he wore that elongated his earlobe had made her afraid.  It looked like a bone from a finger – a baby’s finger.  She had never seen a man with such an earring and such long red hair.  She stared at the earring as he chanted, her eyes straying from the earring to the small bones and horns scattered on the red earth.  Every now and then he would pick up the biggest horn, shake it and then listen to it as if it was talking to him.

The hair – long curly hair – was a dull colour between yellow and red.  It somehow reminded her of the red ochre and clay Maasai warriors back home used to colour their hair with.  She watched his scruffy ponytail bounce up and down as he talked to the horn excitedly.  After which he would go into a trance as if he was possessed.

“The spirits are waiting for you, my child, just follow your nose,” he would say after waking up from the trance, his eyes blood shot red.  Finally explaining he added, “follow your nose, child, it will lead you to where she will come from.”

The smell of jasmine whose flowers opened in the night like white stars would waft by her nose by the night breeze as she walked blindly through the still of the night following her nose, silently memorizing the strict instructions he had given her.

“Don’t look back,” he had always warned her.

She was always so tempted to look back – to see how far she was from his little thatched shack with old black cloths, horns, amulets of every sizes and colours as well as pots draped casually at the entrance.

He must be of Arab descendent, she mused.  How else would one explain the colour, length and texture of the hair?  Drowsily she smiled as she imagined him bending down to pick up herbs, his ponytail falling over his wrinkled caramel brown skin, sweeping the flowers on the grass.

Every fortnight morning she would wake up disheveled, tired and aching.  Memories of the night before toying with her mind – the prayers, infusing herself in incense, the chanting, beheading of the black cock, massaging her breasts with the warm blood, the trances, the cries of the wolves…was there someone with her, a companion – a night visitor?  Every morning she would shake her head as if shaking the thought away.

Quietly the thought would creep back, teasing her tired mind that desperately needed some sleep.   Maybe it was her.  Maybe she was finally coming.  Jasmine, that’s what she would call her.  No, she would shake her head angrily; she should count the chicks before the eggs hatch.

She shivered and welcomed the thought as she remembered them.  The worst was the older sister, Zalika.  Always wrapped in the most expensive Kente or Adinkra cloth, her well manicured hands dangling car keys of the BMW X5 she was given as a gift after she had bore a boy.  After his circumcision, she was taken to Paris for shopping.

“Useless woman!”  She would spit on the floor disgustedly.  Her lipstick chic, the words would trip out as cold as ice and as sharp as a blade – cutting her insides, “just filling my brother’s toilet.”

She sighed.  Jasmine – breathing in the syllables.  There was already one Jasmine in the family – her brother in law’s two year old daughter with curly reddish brown hair, like the colour of jasmine oil.  Jasmine’s mother, Lulu, was quiet, always wearing a mocking smile.

“Even if her grandfather was from Tanga, I don’t see how Jasmine could inherit the red hair!”  Zalika had spit when Lulu was presented with a RAV4.  “He was as black as coal, I hear!”

Jasmine.  She arrived finally – six weeks ago.  They had a hair cutting ceremony after arobaini; her hair is not as black and kinky as her father’s and hers.  Her Jasmine – whose hair colour is that of jasmine oil.

I am an artist. Practicing Interior Architecture Designing. I used to write a lot back then. But with work and all, my time became tight. I went on a holiday in April 2004 and took with me a few books by Maya Angelou and Iyanla Vanzant. I then started some soul searching which got me into writing - first into poems and now into short stories - I haven't looked back since then. SANDRA'S DEN.

10 Things I Hate About U: Poetry by Mugabi Byenkya

Why my Grandfather’s Sister Cried: Fiction by Pemphero Mphande