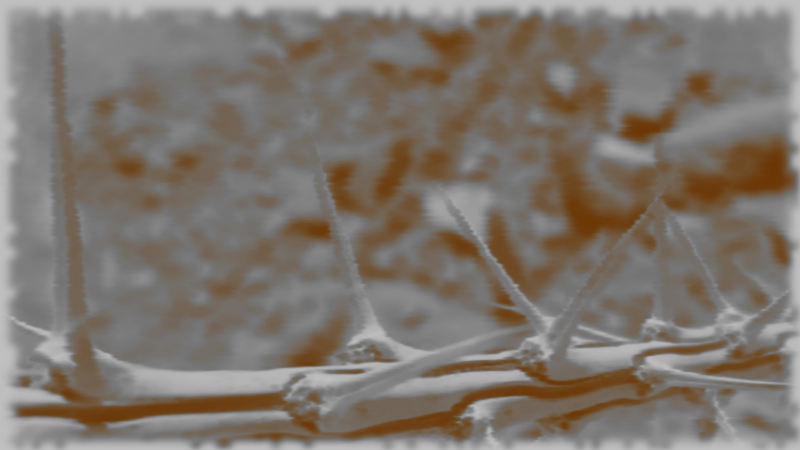 They ran over a tree trunk. Halted, a little. Then one of the men at the back of the truck jumped out. Cigarette between his teeth. Bloodshot eyes. A pot belly and tiny legs in a translucent grey shirt and brown khaki shorts. His best travelling attire. In his left hand, he held a herding stick, the height of his shoulder. The rest found relief in the dry air that seemed fresh at the instant. It was an abrupt halt; terrible news given their present predicament and road map to haven. But they hoped. For the lost country and fields and shambas and wells and springs and the morning mist and their own kind of dry. Mr. Volunteer-in-smoke scouted for the rupture. Alas! There it was. The puncture. And the thorn. A very thin but sharp thorn. In Moroto? No! Mr. Driver resigned to scavenging through his dictionary of curses. He cursed the earth, then the air, then the crusty road with no clear path; then he remembered he was ferrying a whole lot of goods across the trek and he cursed them, too. For such vulgar language, the gods could have slapped him.

There was silence for a while. Not many understood what he said. They thought that he was throwing a few blows at Mother Nature.

But whose mother was she now? Huh?

Ten families, altogether, jumped off. One after the other. First, the men. The men helped the women jump, carefully enough not to tear their scarves. But what clothes had they on? Lots of beads and scars all over their body. A true definition of beauty. The women in turn held on to their children, many had infants. Some infants had infants. But this was a way of life. Their way of life. And none imagined how their new hosts would treat them with their infants and infants’ infants.

The women inclined to what they do best: cook.

Who does the cooking in the middle of nowhere?

At least, they had the dry shrubs to start the fire and the chap chimneys to light it. The children were hungry. And so were the children’s children. The men gathered together, coiled in circles, desperate circles to ease a way out. They felt the burden of protecting their own. Different homes, different passengers, all in one truck, in a parallel state of affairs. No more cattle. No milk. As long as their women stayed on course, they approved.

At noon, the wind blessed them with her strongest blow. What a sight!

Two young boys coughed blood. They drank the second last carton of water. They made it after one large gulp, each. On that day, one man’s sons survived. Two children survived divorce.
They sat. Waited.

At day break, the truck driver opted to count his lot, to see which ones deserved the cross and which to abscond. He was uncertain how many he would manage to toss over to the other side. Somehow, he imagined and prayed, that his choices preceded his bet. He counted six families. Strong and with more family on the other side. At the camp. He grabbed his light black scarf, tied it around his nose and mouth, fastened his hide sandals and toured his truck. One man joined him. He said he was skilled in different kinds of repairs. It did not matter which things he repaired. He could try. The two men invoked every data on the vehicle: 1995 model, diesel, German made, well for the dry terrain. Good enough, they sighed simultaneously. Only Mr. Driver read, the other nodded. When the rest saw their upbeat response, they signed on for duty. Of course, after securing their young brides away from each other. The toddlers were left to enjoy the desert.

Scrap metal. Screw driver. Spare tyre from the front of the truck. One last carton of water. And tens of heads to order each other on how to fix the road runner.

Seven hours later, the old rusty baby was ready for another twenty miles. Cheers! Mr. Driver forgot his egg count. While in their lonely safari, they sang. They hummed. They joked. The men were seated alone at the back. The children and the children’s children in the middle. The women right behind the driver and co-driver. Co-driver was a deserter. Unmoved by what songs pledged reverence and what recitals spoke of allegiance. His fidelity had been lost. He no longer had anyone to tell of his faithful ventures with his government. So he sat back, waited for the rest to shut up. And imagined he was in the arms of a virgin. One he longed for after every failed escape from his captors. But his distance was worrying. More to Mr. Driver.

As superb as he was for the job, Mr. Driver often felt watched. Watched by the very eyes he ran away from; especially while he carried merchandise. He worried more when he reached the finish line because on every ‘often’ trip, one of his goods was an insider. But he still traded. In flesh. And counted himself one lucky risk taker. A gambler of sorts. He calmed himself in assuming he did the goods justice. From one tormentor to another. Although on different guillotines. He knew exactly what awaited them on the other side. Some good, others bad. He understood the risk of breaking bad into another territory but his pride lay in shifting one lot from its soil to another, usually for better.

The second tormentor could not be that bad. He at least gave Mr. Driver’s merchandise shelter, and canned food, and blankets, and jerry cans, and porridge, and shots, and sometimes, a piece of land to graze an animal or two. But he was always suspicious. He was suspicious of his new entrants, of his latest scores of lovers of peace and freedom bearing pain and shutter turning on him, in the long run. All the same, he embraced them. As he wanted to be treated, if, tables turned, and he lived.

One day, he thought, humanity will see what some of its kind has done and appreciate it, even if it is gone. (That is what every host wants to say and believe.)

Like his guests, he also hoped that when that day came, his family and guests allied and connected until they returned home: back to the home their own brethren drove them away from. And for once, in a lifetime of the race and flesh, none saw himself greater than the other. And perhaps his guests, though welcome and at ease, would not abuse his hospitality or turn him into a force too great to fear than the one that alienated its own. He prayed that they understood their stay depended on their assimilation rather than imposition of their former self.

His guests could not agree any less.

I am a lawyer by vocation and instruction and a writer by rebellion. I enjoy a quiet read away from traffic of any kind. I do not mind settling in Nairobi since I have many hideouts to piece out a feature but would keep Kampala nigh for groceries, friends and family.

Angels Amongst Us: Fiction by Ahmed Maiwada