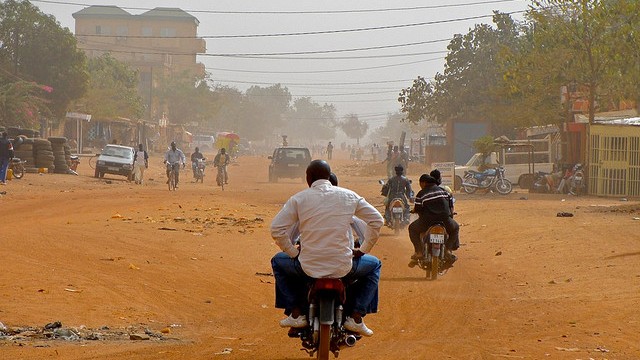 When the fields are damp with dew,
And the dawns billow with cold,
It’s Harmattan.

When the sky is grey or white,
And the air pale like a ghost,
It’s Harmattan.

When the ‘noons become hot and dry,
And the sun heats us up like a toast,
It’s harmattan.

When the streets cry of dust,
And the streams whimper of thirst,
It’s Harmattan.

When the leaves wither and drop,
And the squirrels wiggle and jump,
It’s Harmattan.

When the evenings grow into cold nights,
And the moon tosses all alone,
Its Harmattan.

When cold befriends the noses,
And people sneeze and cough,
It’s Harmattan.

When the wind grips and wrinkles the skin,
And the lips shiver and break,
It’s Harmattan.

When the rain is out of season and the heat sets in, it means only one thing: Harmattan is here.

Harmattan is a dry and dusty wind that comes from the Sahara Desert and blows hot and cold over Western Africa. It begins lightly in late November, grows strong in December or January and cools off in early March.

Harmattan brings lower humidity. As a result leaves wither and fall, leading to brown fields and roads, thus creating an aura of the Sahara. This wind carries with it dust and fine particles that are suspended in the air forming a cloudy screen (especially early in the morning), making it difficult to see ahead. When this becomes heavy it is called Harmattan haze, which causes problem for transportation especially in the aviation industry. Flights are often cancelled and re-scheduled this season.

The dust and fine sand particles settle on grasses, cars, roofs, roads, furniture and virtually every surface, leading to what some call The Brown Season: everywhere looks dusty and brown.

This prevalence of dust and the chilly weather causes respiratory infections like cough and cold to be common in this season. And this same reason makes the season a dangerous one for asthmatic patients.

Harmattan as defined above is a wind, but the period in which this wind lasts is popularly called the Harmattan season. Harmattan as a season shows an interesting characteristic mix of both hot and cold. The early hours of the days are typically cold or often very cold and the afternoons are hot with high temperatures that decrease towards the evenings, and the evenings grow into cold nights. These harsh conditions of Harmattan cause skin to dry and lips to crack, even trees and streams are not spared. Using Vaseline or oil-rich creams and lip gloss can prevent dry skin and cracked lips.

Harmattan is characterised by cold, which severeness gives the feel of the winter season experienced in the temperate regions. Winter in its white colour is characterised by cold and snow, while Harmattan in its brown colour by cold and dust, thus Harmattan may be loosely called The Brown Winter. Wearing thick clothes like cardigans and sweaters on lighter ones will produce warmth and prevent cold and pneumonia that may result from cold. And these thick clothes can be removed when the temperature becomes high and the heat uncomfortable during the day. In addition, brown footwears and trousers (that can withstand dust) are good for this season.

Furthermore, fire outbreak is not uncommon in this season. On Wednesday the 2nd of Jan, 2013, the South-West Zonal Coordinator of the National Emergency management Agency (NEMA), Mr. Iyiola Akande, cautioned Nigerians against harsh weather condition as well as fire outbreak during the Harmattan. Akande in his statement made available to the News Agency of Nigeria in Lagos particularly appealed to related authorities to enlighten the public on avoidable fire incidents during Harmattan. Due to the season’s conditions it is not surprising that fire outbreak may become disastrous.

Fire outbreak is often caused by electricity spark, careless burning and handling or storing of fuel. Thus, it is best to turn all electrical appliances off when leaving homes or places of work and when going to bed at night. Refuse burning should be avoided or done under watchful eyes. In addition call should go to community leaders especially in rural areas to warn their people against bush burning for farm clearing or hunting purposes. Also, use of candles, lantern and fire wood for lighting, to cook or for warmth should be done carefully. And it is important for concerned agencies to be properly equipped, prepared and in a position to respond to emergencies promptly.

Oladipupo Akolade R. is the author of Poems from Service: The Companion, published in March, 2014.

The Woman in the Photograph: Short fiction by Abigail George

To Court A War: Poetry by Iyanu Adebiyi