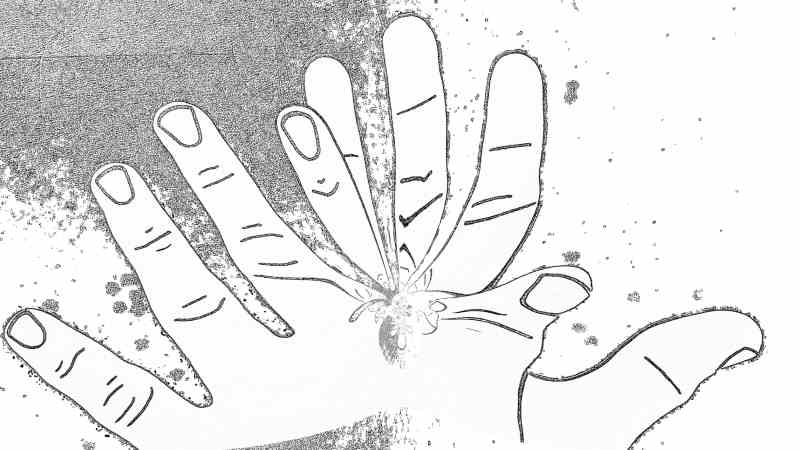 Few one-word titles work, in my view. Like Knots. I think the story should have been called “The Donkey in Him” but I didn’t want to impose by suggesting a change as I had an earlier story. One-word titles don’t often get the chance to be catchy, and they read like the writer hastily strapped it on to the story without thinking hard enough. But most good stories have a title embedded in them somewhere. Someone just needs to dig it out.

At the Foot of my Ten Fingers in so intriguing, yet it speaks of the callouses of life…

I do not know what poor Jaleji did to the pastor’s daughter Riako which made her go and begin living with him at the beginning of that season when every homestead had empty granaries with open mouths waiting for new harvest at the end of that year. Baba and Mama were talking about it one evening those years while I touched the foot of my fingers where water had collected under the skin. It was the first day I had been dragged to the maize fields to weed.

Baba knew my hands were hurting and so he asked me:

What is it with young men’s hands?

Ah, let me see – you exaggerate like this hen… he touched the hen which was walking to a corner of the hut and she squawked.

Baba held my small palms and looked (I know he thought I was a child but I can tell you that as he looked at my palms I too looked at his face and saw no seriousness on it).

I do not like the water but young men’s hands will heal very fast.

Before that hen can swallow one maize seed.

I asked seriously: Baba who put water under the skin of my palm?

Ah, it is just the kweru hoe which you weeded with in the morning but I will cane him for you.

I instantly hated the hoe and begged Baba not to cane him for I did not intend to go to the maize fields the following morning and have my hands bruised like that again. But Baba said going to weed was necessary because ‘Adam gi Efa’ had punished all human beings on earth by eating God’s ripe fruits in the garden, so people must sweat luya before they find food to eat. I was still thinking about sweat running down my forehead and if God wanted people to eat raw things when Mama told me:

I will inject your porridge with our good needle for you tomorrow.

And so I agreed to go to the maize fields. For that was Mama’s way of saying she would put sugar in my porridge next morning.

They forgot about me…

The next moment Mama and Baba were talking about Riako and Jaleji. Baba said that Riako’s father was angry at his daughter giving herself to someone who was odhier nyaka od olunde. I giggled because Baba meant Jaleji was ‘poor up to inside his own anus.’ A man with palms as hard as the stones near our stream – Jaleji who earned his meals by weeding other people’s cane fields. And Baba added how Riako’s rich father had arrived and settled in Odiya, in the only brick house in our village, after retiring from his job in Nairobi (and this I can tell you, that Riako’s body was ‘yom ka pamba’ – which was how we children said ‘soft like cotton.’)

Mama asked, And why must he?

Baba said, Mathayo has gone for his daughter three times – grabbing her back home from that leaking, thatched hut – but the girl keeps going back to Jaleji.

She said, Mh, that girl knows what honey she encountered in Jaleji’s kombe hive.

If Jaleji marries her will the girl manage?

Mama asked with authority in her voice: Heh, why not?

Baba nodded as an afterthought, Of course Riako will; human beings can get used to any condition under the sun.

As Baba had said the next days we saw the Chief and his policemen dragging Jaleji away and that evening on its very heels word came that Pastor Mathayo and his wife were rushing Riako to the hospital in Kisuma because the girl had taken rat poison and the couple’s car was leaving dust behind it as it sped past Odiya shops.

When Riako was brought home after days Jaleji had been set free and we passed him weeding Baba’s cane fields energetically, whistling, his forehead wrapped in a cloth to guard it against sharp, knife-like cane blades…

In her house with Jaleji, Riako’s body lost its moistness like a drying waterhole right before our eyes and they said it was because her father had cursed her for disobeying him. Her two calves were thin like oleng’ grass.

And then Odiya waited and waited for Riako to give up and run to her parents. We did see her feet crack. When she greeted us her palms were stone. Not the cotton palms we had felt in the very early days of her going to Jaleji’s hut. Now she smelled of the toyo bar soap which Jaleji used – not the sweet-smelling Lux soap Pastor Mathayo’s family had brought from Nairobi. There was no doubt that odielo, atipa, mito, osuga, akeyo, ododo, and susa pumpkin leaves were daily occupants of Riako’s pots…

I remember their second child, coming at the end of the second season, because it was the time Riako’s body bravely fought and called back fat, wrapping it onto herself, putting hard things on the foot of every finger which held the hoe when she accompanied her husband to the cane fields where they weeded for us. She became fat.

And Baba was happy telling me about the human body as we carried our hoes:

I know you remember the day your palms swelled when you weeded. Now they cannot swell.

We were going to weed sugarcane, I having graduated from maize, with no pain at all at the foot of my ten fingers.

Our Lantern Is Lifted for our Saviour: Poems by Adeola Ikuomola

Tragedy of the African Street Child: A Review of Makena Onjerika’s “Fanta Blackcurrant”