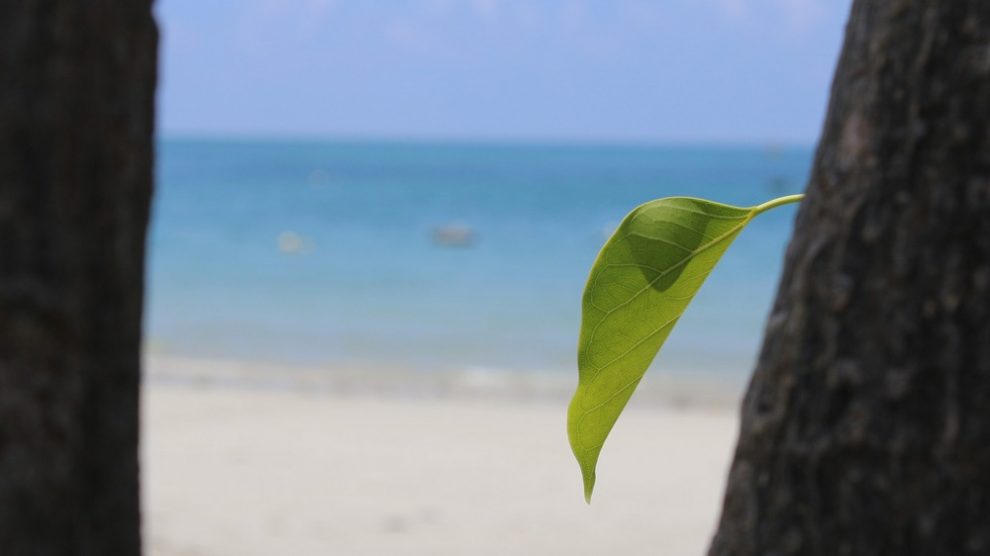 You kick your right foot into the next wave scattering the image of a drowning boy into tiny droplets of water. It’s a story you don’t want to read…

You’re standing at the river bank, hands in pockets of your white shorts, brows furrowed in reflection. Your beach-inspired-design shirt sways as the wind directs. The promiscuous wind, it tries to seduce everything in touch. You take in the entire area of the sea as it stretches to point infinity, meeting the sky at the horizon. It’s too vast and blue, like the sky above you – as above so below. They even bear a stronger resemblance than you’ve noticed before; the sky, blue with fluffy white clouds; the sea, blue with fluffy white waves.

Two birds hoot as they flap over your head and rest on a branch of the coconut tree behind; the leaves rustle – another victim of the wind’s seduction.

White foamy rushes of waves trickle with a cooling sensation between your feet and toes; they unfold in turns, like pages of a book. Scribbled on them are untold stories of those who got lost at sea. You kick your right foot into the next wave scattering the image of a drowning boy into tiny droplets of water. It’s a story you don’t want to read, because you were there when it happened, because you couldn’t reach him, because he was your only brother.

The wind and the ocean must be lovers; they never get tired of playing together. The next wave trundles with might and height, like a herd of running elephants. You take some steps backward, keeping a safe distance so it doesn’t take you with it and return you as tragic news – Manager of Karina Beach Bar drowns at sea.

It’s been twenty years since you were washed up here, right on this spot where you stand. The beautiful sea, it is as wicked as it is kind, just like its windy companion. Why had they acted so that night? Howling and scowling like angry animals, scaring the moon off the night sky, conjuring up thick gloomy clouds, swaying your boat until the first crack, then the second, till it rubbled. Was that how they made love? Was that their own form of orgasm?

The high wave splashes and recedes. You walk back closer. If only we had stayed back, Onjefu would still be alive. But home wasn’t comforting anymore, that’s why we crossed the border, trusting our lives to the sea which, at that time, seemed safer than our land.

That night, amid the sounds of rumbling thunder and stormy water clashes, the wailings of drowning people filled your ear. You clung onto a leftover of the rubbled boat, gurgling and struggling to stay afloat. You could only make out faces when the short-lived touch of lightning struck. Onjefu’s hands dangled above him, like falling chop sticks, when the lightning brought him in view for some seconds. That was the last image your eyes shot before you blacked out. You woke at shore at sunrise, coughing up salt water. Where others were washed to, is a story for the sea to tell. That’s why you come here every time alone, to peruse the pages of water waves, if they will carry a message of your brother’s whereabouts, if he was also washed up to a shore with civilisation, if people had found and helped him too.

A light tap on your back makes you turn around. It’s Esther, one of the waitresses. You feign a smile.

“Please we need you at the store room,” she says.

You nod and she walks away. Sparkles of white salt grains on your legs reflect the yellow sun as you walk behind her, hands in pockets.

Image by Free-Photos on Pixabay

I am a Nigerian writer. I studied Mechanical Engineering at the Federal University of Technology Owerri. I am a co-editor at Inspire Crib, an online writing service platform. My works have been published on IFEMED journal and Naija Stories. I currently live in Owerri, and enjoy prose as much as I do poetry.

The Chef D’oeuvre of Easter: Poems by Collins Okpala

Henry Chukuwuemeka Onyema
We use cookies to ensure that we give you the best experience on our website. If you continue to use this site we will assume that you are okay with it.Ok