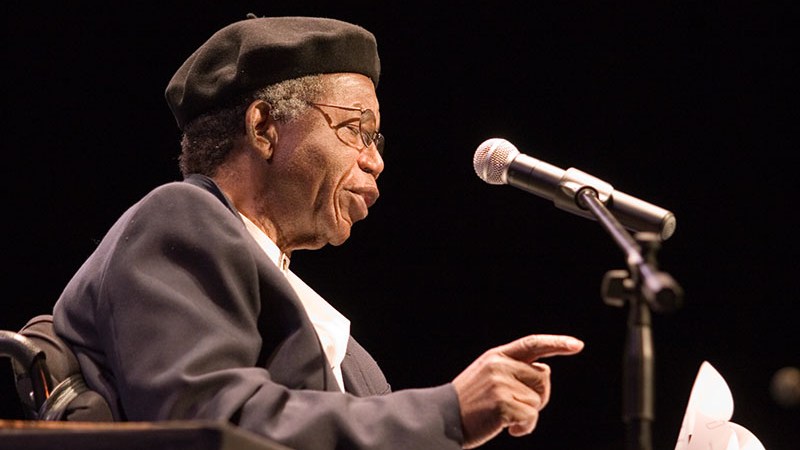 Chinua Achebe died at exactly 11:51pm (US time). That is 4.51am (Nigerian time), on Thursday, March 21 at the Harvard University Teaching Hospital, Massachusetts, USA, aged 82. It was one death that shook the entire world as tributes came pouring in from all the continents of the world, from presidents down to paupers. For some of his admirers, the world stood still, yet for orders events moved at a frenetic pace, culminating to the Thursday, May 23 interment of the icon in his native Ogidi, Anambra State. The one-storey home of Chinua Achebe looks quite modest from the outside but it has a lift inside. The building for me captures the essence of the great progenitor of African literature: the quality of what is within is greater than any showiness outside. The mausoleum constructed to the side of the frontage of the building bears the heavy burden of the memory of Mother Africa in the buried remains of Professor Albert Chinualumogu Achebe, the inimitable author of Things Fall Apart.

Achebe was interred at 4.30pm in a marble tomb in his Ikenga village ancestral home of Ogidi town in Idemili North Local Government Area of Anambra State. He was given an elaborate Christian funeral service at St. Philips Anglican Church, Ogidi, as opposed to the African mores he championed in his novels.

President Goodluck Ebele Jonathan made his presence felt even though Achebe had rejected his award of the Commander of the Federal Republic (CFR). President Jonathan was in the distinguished company of Ghanaian President John Dramani Mahama. Governor Peter Obi of Anambra State was akin to a chief host and even doubled as the Master of Ceremonies along the line. The politicians actually dominated the scenes, with the writers dwarfed out of sight. The many contenders for the forthcoming gubernatorial elections in Anambra State, notably Senator Chris Ngige, Dr Andy Uba, Dr Ifeanyi Ubah, Dr Obinna Uzoh, etc., jostled for space with their supporters.

President Jonathan sang the praises of Achebe as a philosophical writer whose insight tore through the heart of Nigeria’s national problems. He cited Achebe’s The Trouble with Nigeria and There Was a Country as works that fearlessly held to account the political leadership that sent the country on the backward spiral since independence.

According to Jonathan, “It is for us to work very hard so that by the time the little Achebes will write again, they will write that there is a country and not that there was a country.” He highlighted his recognition of Achebe as “one of the greatest writers of his time and indeed all time, an embodiment of high values and a man of principle and deep convictions who took a firm, unequivocal stand on issues, however high the stakes, and regardless of the risk involved.”
Ghanaian President Mahama stressed that with the death of Achebe “writers in the African continent and the Diaspora have lost a mentor and literary godfather.” According to President Mahama, “In the same way that Chinua Achebe’s books helped foster the talent of countless writers in Africa’s post-colonial era, they also inspired a number of Africa’s current political leaders.

Achebe had such influence on the African political landscape that three years ago he started convening an annual colloquium at Brown University, where he was a professor, that brought together leaders, scholars and artists to discuss ‘strengthening democracy and peace on the African continent’. When I was introduced to Achebe’s writing in the 1970s, during secondary school, there seemed to be no discernible separation in Africa between politics and the arts. We attended demonstrations almost as frequently as we attended discos. The music that we listened to, from Fela Kuti to James Brown, was filled with racial pride and political protest. It was, however, the literature of Achebe, namely his classic novel Things Fall Apart, that provided me with a larger context for the various maladies that were taking place on the continent. Reading that book was like a rite of passage.” He described Achebe as a visionary truth-teller who gave Africans confidence in the world community, stressing that “Achebe will never die having left behind a legacy that will keep his voice alive forever.”

South African President Jacob Zuma sent a condolence message read at the funeral. In President Zuma’s words, “Chinua Achebe was indeed Africa’s greatest literary export and a legend of African Literature. It was in his famous novel Things Fall Apart that many Africans saw themselves in literature and the arts at a time when most of the writing was about Africans but not by Africans. Africa owes a debt of gratitude to Achebe.”

Chief Emeka Ihedioha, the Deputy Speaker of the House of Representatives, represented the National Assembly, depicting Achebe as “an iroko and ambassador extraordinary whose accomplishments only rank second to former South African President Nelson Mandela.”
The Anglican Archbishop of Aba Province, Most Rev Dr Ikechi Nwosu, who delivered the sermon at St Philip’s Anglican Church, Ogidi, entitled “Professor Chinua Achebe — A Parable to the Nigerian Nation” made the clarion call on Nigerian leaders to emulate the late Achebe’s attachment to the gospel as his foundation in life. He argued that Achebe believed so much in Nigeria such that he did not allow the negative forces in the country to deter him from attaining the status of an accomplished man acknowledged all over the world. He makes the case that Achebe in his last book, There Was a Country, undertook the task of enlightening Nigerians that despite the many forces of retrogression the country can attain any height that it wants. He defended Achebe’s refusal to accept national honours, averring that it was not because he did not like Nigeria. Rev Dr Nwosu said: “Achebe believed thoroughly in Nigeria; the only thing is that we all believe in righteousness but some people defined it in a way Professor Achebe could not understand.”

President Jonathan rose up to make a second speech at the funeral in which he announced that both the Nigerian and Ghanaian governments will completely reconstruct St Philip’s Primary School in Ogidi which Achebe had attended.

Crowd control proved quite difficult for the many security operatives who meted out brutality on the ordinary people. Most Rev Nwosu had to admonish the potentates that it was wrong to punish the people they ought to be protecting.

Achebe’s first son Dr. Ikechukwu Achebe gave the vote of thanks on behalf of the Achebe family, saluting President Jonathan and President Mahama of Ghana, Nigeria’s National Assembly, governors, the literary community, high chiefs, and the multitudes of admirers of his lionized father for the outstanding burial.

The elaborate burial programme for Achebe started on Sunday, May 19, with a day of prayers and religious worship at the National Christian Centre, Abuja. Then the Association of Nigerian Authors (ANA) which Achebe founded held a symposium on the life and times of the legendary author at the International Conference Centre, Abuja in the morning of Monday, May 20. This was followed with an evening of tributes by the politicos and the literati with many cultural troupes performing.

Achebe’s remains arrived at the Nnamdi Azikiwe International Airport, Abuja on Tuesday, May 21, draped in the Green-White-Green flag of Nigeria and accompanied by his wife Prof. Christie Achebe and children Dr. Chinelo Ejeiyutche, Dr. Ike Achebe, Dr. Chidi Achebe and Prof. Nwando Achebe. The Secretary to the Government of the Federation Chief Anyim Pius Anyim was at the airport as the head of the Federal Government delegation. Governor Peter Obi accompanied the Achebe family in the flight from Abuja to Akanu Ibiam International Airport, Enugu, where the body was received by the Governors of the Southeast States and leaders of the pan-Igbo organization Ohanaeze Ndigbo.

The University of Nigeria, Nsukka where Achebe was Emeritus Professor held a Special Senate Session at its Enugu Campus in honour of the iconic author. In the trademark tradition of University Senate meetings, the University Registrar Ogbueshi Anthony Okonta called out names of members of Senate present. Everyone present answered his name. When he called Emeritus Professor Chinua Achebe there was pin-drop silence. He made another call of the name. There was again no reply. He uttered a final call and still heard only silence. It was after the third and final call that the very personable Vice-Chancellor of UNN Prof Bartho Okolo stated that it was “unusual for Achebe not to answer to his name.” The VC on his own called Achebe, staring at his remains in the casket in the middle of the Main Hall of the institution. As Achebe did not still answer, VC Okolo said: “Truly, this is a solemn confirmation that the earthly sojourn of our revered colleague, Emeritus Professor Chinualumogu Albert Achebe, our compatriot who rose to become a citizen of the world, has come to an end. It is therefore with profound grief and regret that I preside over this special Senate in his honour.”

A celebration of life carnival was staged at the Alex Ekwueme Stadium, Awka on Wednesday, May 22, whilst ANA put up a festival of life.

Renowned Jamaican scholar Professor Ekwueme Michael Thelwell had the singular honour of delivering the almost four-hour burial lecture entitled “Ikejemba: He Had In Him The Elements So Mixed”. According to Professor Thelwell: “Language is our father: the father of culture; the creator of collective consciousness within which humanity can unite to raise our voices against all that is evil in this world. This is the power of language, and yet you, Mr. Achebe, grant this power to language. Mr. Achebe, Owner of Words, you are the creator of language.”

Shortly after Achebe’s burial, Achebe’s second son Dr. Chidi Achebe while directing me to the tent in which dignitaries were feted, said: “My father is not a saint but he indeed lived a remarkable life. Nobody has come here to tell us, for instance, that he had a love child for my father!”

For a man of such distinction, Achebe lived a scandal-free life. His legacy is assured, as attested to by The Economist of March 30, “Mr. Achebe was widely hailed as the father of African literature; but, smiling over his heavy bifocals, he rejected that. Instead, he repeated his favourite proverb: ‘Until the lions have their own historians, the history of the hunt will always glorify the hunter.’ Small though he was, he turned out to be the African lions’ earliest and most important historian.”

For Achebe’s distinguished colleague, the Kenyan novelist Ngugi wa Thiong’o: “Achebe bestrides generations and geographies. Every country in Africa claims him as their own.” In Nelson Mandela’s ringing words, Achebe is depicted as “The writer in whose company the prison walls fell down.”

Let me reserve the last word to American President Barack Obama and First Lady Michelle Obama: “A revolutionary author, educator, and cultural ambassador, Chinua shattered the conventions of literature and shaped the collective identity of Nigerians throughout the world. With a dream of taking on misperceptions of his homeland, he gave voice to perspectives that cultivated understanding and drew our world closer together. His legacy will endure in the hearts of all whose lives he touched with the everlasting power of his art.”

Gone To Dust: A Short Story by Oluwafisayo Awi

Love Is Not Found At Bus Stops: Fiction by Edwige-Renée Dro

Why Imprisonment of Writers Contributed Most to African Literature