Dr. Chris Chinwe Ulasi has been a professional communicator, scholar and researcher for over fifteen years. A screenwriter, producer, and poet, he was from 1993-1996 journal editor and book editor of the Journal of Nigerian Affairs (formerly CONPO REVIEW). He is the Executive Editor of USAfrica, a community newspaper, and The Black Business Journal both based in Houston. He has published scholarly articles, poems (DrumVoices Review, Summer-Fall 2000), book chapters, and presented papers at numerous conferences. He has been a consultant on International Communication and Development for the International Education Foundation in Austin, Texas.

Chris is a member of several professional organizations, including African Studies Association and the International Communication Association, and is very active in local and nationally based social and cultural organizations. A film producer and director, Chris has to date produced four feature length films: Material Witness (Songhai Filmworks, 1994) and The Kangaroo (Songhai Filmworks, 1995), The Stalk Exchange 419 (Songhai Filmworks, 1997, and the fourth film as a producer, Return of the Exile, which he co-wrote with Don Okolo is currently in distribution. Chris co-directed the feature film Blood n Destiny with Don Okolo in 2009. Another project by Ulasi, a documentary film examining the lives of the Nigerian emigrant community in Houston, is currently in pre-production.

His new book of poetry Demigods of the Rainy Season is forthcoming in Summer 2010. He lives in Houston, Texas USA. 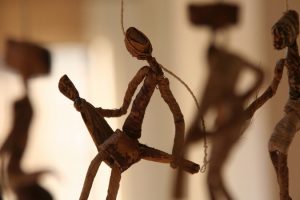 Masquerades at the Harvest Dance: Poems by Chris Chinwe Ulasi

Masquerades at the Harvest Dance …without guns and fanfare, except a crown for the festival and a raffia skirt for fans…! I think of the wide-eyed gaze of the...

The Muse: Fiction by Nnaemeka Oruh

Bill Got a Visitor: Fiction by Augustine Malizu

The Monument: Fiction by Deleteh Bank

Deleteh Bank
We use cookies to ensure that we give you the best experience on our website. If you continue to use this site we will assume that you are okay with it.Ok